The question of what to do with the Islamic State member in our midst has been on Canadian minds ever since an episode of The New York Times podcast Caliphate a few weeks ago.

The unsettling series stars the dynamic reporter Rukmini Callimachi, one of the first journalists to cover the extremist group as it emerged and began to play a role in the Syrian war. It’s a dangerous job that she professes to love, one that’s involved face-to-face interviews with dozens of current and former Islamic State members.

One of those is the Canadian man at the centre of the podcast known as Abu Huzaifa al-Kanadi. Rumour has it that he lives in the Toronto area, and it’s disconcerting to hear his story told by a twentysomething with the same accent and slang as any other kid from the Greater Toronto Area.

Huzaifa, as Ms. Callimachi calls him, is the son of Pakistani immigrants, moderate Muslims who discouraged him when he began parroting extremist YouTube pundits. In 2014, he told them he was going to their home country to study and spend time with his grandparents. Instead, he sneaked into Syria to join the Islamic State just after it declared its caliphate, or homeland.

His recounting of his experience there includes time spent “chilling” with other English-speaking recruits. Apparently shooting a Glock is just “like paintball.” Then comes the infamous episode that invokes a physical reaction of angry nausea: In it, Huzaifa describes in detail how he personally killed “apostates,” Islamic State resisters considered inferior Muslims.

The problem is that this seems to be different from what Huzaifa told the RCMP and CBC. Both have interviewed him since he defected, and CBC has him on record saying he’s innocent of serious violence. But Ms. Callimachi was the first to talk to him after his return to Canada in 2016: Her take on the discrepancy is that he felt more confident back then that he’d escaped law enforcement.

The change in his story coincides with growing intelligence attention. Having purposely joined a violent terrorist group, Huzaifa is now unwilling to be arrested for being a terrorist.

For law enforcement, Huzaifa’s story is about the need to have enough evidence before charging someone with a crime; for politicians, it’s about the balance between maintaining open borders and tracking potential extremists.

As Ms. Callimachi details on the latest episode of Caliphate, it’s also about journalistic quandaries, such as fact-checking complicated narratives and the ethics of protecting a source’s identity after a bloody admission.

Yet another angle from which to consider the show is this: a seemingly bottomless pool of unmoored young men who first become prey, and then predator.

Former schoolmates told the Times that Huzaifa was a loner, an anti-social guy without many friends. He says himself that he felt like he disappointed his parents by not going to university and that fighting for the beleaguered Muslims of Syria seemed like it would give his life meaning.

Ms. Callimachi met him on Instagram, one of many platforms where the Islamic State spreads its propaganda. He was lured to the caliphate by a sophisticated recruiting set-up, after essentially making his decision to become a jihadist online.

His back story sounds uncannily similar to that of, say, Alexandre Bissonnette, described as a once “lonely teenager” who made frequent visits to racist far-right websites before allegedly shooting members of the congregation of a Quebec City mosque.

It’s not terribly different than that of Toronto van-attack suspect Alek Minassian, who has been described as “socially awkward” and preoccupied with misogynist “incel” propaganda.

Huzaifa also has much in common with a legion of disaffected, internet-obsessed U.S. mass shooters. While their varying ideologies focus hate in different places, the lead-up to their alleged crimes follows a pattern.

In mid-May, Ms. Callimachi was on a panel at the University of Toronto’s Munk School of Global Affairs with academics who study extremists. All were careful to say that, of course, not all unhappy or bullied young men become killers. Neither mental illness nor internet addiction makes a murderer.

But the journalist said one of her goals is to humanize recruits in order to understand them. And what her work shows is the vulnerability of many unremarkable young men, and what easy targets they are for well-crafted lures.

Law enforcement will decide whether there’s enough evidence to charge Huzaifa for joining the Islamic State or other crimes, but dealing with him is just part of this challenge. We also have to figure out what to do with other young men so desperate for belonging – and with the would-be puppet masters whispering poison in their ears. 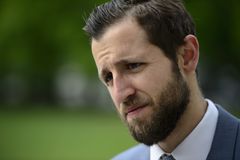