Possibly we will discover the departure of Paul Rochon as deputy minister of finance the day after the fall economic statement was not entirely coincidental. Were I in his place, I would not wish to be associated with that dog’s breakfast of bookkeeping tricks, uncosted spending and rosy scenarios, either.

If it was not clear on the day, it is abundantly clear by now that the government is quite literally keeping two sets of books. The random bits of deceit strewn throughout the document – the “3 to 4 per cent of GDP” stimulus that is actually a third of that amount; the subtraction of $16-billion from program spending by renaming unexpected increases in the cost of government employee benefits as “net actuarial losses”; the casual “oh, by the way” revelation that last year’s deficit was $20-billion over budget – are but a distraction from the larger duplicity, which is that the headline figures for spending, the deficit and the debt are utterly invalid, if not altogether meaningless.

What is the point of laying out a five-year track for, say, the deficit, showing it declining majestically to $25-billion from $382-billion, only to acknowledge that none of this actually applies – that the actual deficit for any given year will be at least $10-billion and as much as $50-billion more than what was just announced, once promised-but-not-costed “stimulus” spending is added in?

What meaning do we attach to spending projections that leave out, not only the $100-billion over three years for “stimulus,” but also the (unstated, but likely in the tens of billions annually) cost of a universal child-care program, national pharmacare, plus a sizable reform of the fiscal stabilization program, all of them promised in the same document? We are accustomed to projections that are rendered meaningless by future budgets – spending in future years almost always exceeds what was forecast, often by a wide margin – but it is a little much to see them issued and invalidated on the same day.

The government keeps two sets of books for two sets of voters: the ones it wants to keep tantalized with the promise of billions in new spending, to be delivered just in time for a spring election, and the ones it wants to keep reassured that the whole thing can be afforded without significant tax increases. The media can be relied upon to give prominent play both to the unbudgeted increases in spending and the deficit and debt figures that exclude them, while the contradiction between the two is consigned to paragraph 19.

So while officially the debt-to-GDP ratio will peak somewhere south of 53 per cent in 2022, declining gently thereafter, once you account for future spending increases (announced and unannounced), a worse-than-best-case impact of the pandemic and possible-to-probable increases in interest rates, the actual number is almost certain to exceed 60 per cent.

But not to worry – interest rates are at historic lows! And even if they should rise, the government has a plan to “lock in” the current record-low cost of servicing the debt by financing more of it with long-term bonds and less of it with shorter-term securities. Which is fine, as far as it goes. But while long-term bonds – over 10 years maturity – will make up a larger share of the government’s total borrowing this year, it’s still a relatively small proportion: 15 per cent versus 6 per cent last year.

Indeed, through the first eight months of the fiscal year, it was less than 10 per cent. The vast majority of its borrowing is in treasury bills and short-term bonds – the kind that have to be rolled over frequently and thus leave the government exposed to increases in interest rates. The statement claims “every country faces the same challenge.” But in fact Canada issues a smaller proportion of its debt in long-term bonds than any Group of Seven country except the United States. Britain and Germany have financed more than 40 per cent of their borrowing this year in the long end of the market; Italy, more than 25 per cent; France, almost 20 per cent.

The point that has to be emphasized about this depressing picture is this: The feds aren’t the problem. Neither is the fiscal crisis we are rapidly approaching really about the pandemic or other short-term dilemmas. The real problem is long-term – and provincial. The federal debt-to-GDP ratio may have jumped 20 points in the space of a year but, barring a really catastrophic increase in interest rates, is still probably sustainable in the long term.

The provinces are another story. The pandemic made things worse, but the country’s provincial governments were already heading for trouble without it, thanks to the remorseless arithmetic of population aging, with its crushing combination of higher costs (mostly for health care) and lower revenues (with fewer people of working age to earn income or pay taxes on it). On a standard set of assumptions, the provinces’ collective debt-to-GDP ratio is likely to hit 120 per cent by mid-century.

That’s the average. For some provinces the ratio could be two or three times that amount. Which means that much of that provincial debt is, effectively, federal debt. Newfoundland is already in the midst of a slow-motion bailout by the feds. Others could follow. And why not? What incentive do any of them have to do the hard work of putting their finances back in order if they can count on Ottawa to spare them the trouble?

For that matter, what incentive does the federal government have, so long as it can count on the Bank of Canada to bail it out? The main reason all this borrowing, in Canada and around the world, has not pushed interest rates higher already is that central banks have been financing much of it. The Bank of Canada is currently buying $4-billion in bonds every week on the open market, plus 13 per cent of every auction. All told, economists at the Bank of Montreal calculate the central bank is “on track to buy just under 80 per cent of gross issuance this year.”

Eventually, the bank will have to start to unwind this unprecedented expansion in its balance sheet or risk seeing inflation ignite. That should be fun. 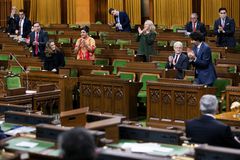 Opinion
When can Ottawa start reeling in the fiscal firehose? Ask COVID-19
December 2, 2020 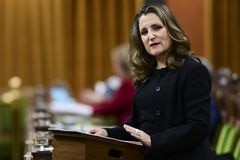