I’ve often felt that the Canadian political spectrum, rather than running from left to right, is instead an index of attitudes toward the United States.

This has never been more visible. Canadian voters, the evidence suggests, are viewing the entire world, not just NAFTA and guns, through the darkly tinted lens of Canada-U.S.. relations.

Startling evidence of this effect will be visible on Monday, when the Environics Institute and its partner organizations release their once-every-decade “Canada’s World” survey polling Canadians on their views of the world.

Its findings are dominated by one overwhelming fact: For the first time since pollsters started measuring such attitudes almost 40 years ago, a majority of Canadians now hold an overall unfavourable view of the United States. As of last year, only 44 per cent of Canadians said they hold a positive view of their neighbouring country, the lowest ranking ever.

It is not a subtle drift – Canadians were overwhelmingly positive about the United States as recently as 2016, until Donald Trump’s inauguration put a majority into the anti-American column. The proportion of Canadians who see the United States as “a negative force in today’s world” is now almost 6 in 10, a 12-per-cent rise over 2008, making America by far the most negative country in the eyes of Canadians (even North Korea comes a distant second, at 46 per cent).

What is apparent, reading the rest of this survey’s results, is how much this antipathy to Mr. Trump has also shaped Canadians’ views of other countries, of their opinions on economics and trade and immigration, of their leisure-time activities, of their own government’s priorities.

For example: When asked what foreign countries are “standing out as a positive force in today’s world,” Canadians’ answers swung sharply, between 2008 and 2018, away from the United States and Britain. The most positively viewed foreign country is now Germany – 17 per cent of Canadians named it as “positive,” up from only 4 per cent in 2008. Sweden has risen to third place (one in eight Canadians identified it, double the 2008 level). Second-place Great Britain saw its popularity fall by 12 per cent; fourth-place United States by more than a quarter.

Why are Canadians suddenly in love with Germany and Sweden? It’s not the Canada-European Union trade agreement (or France and Belgium would rank higher). It’s not sports or culture. It is their similarity to us, and their difference from you-know-who. Notably, both countries took an awful lot of refugees during the Mediterranean-migration crisis of 2015 and 2016 (between them, Sweden and Germany took two-thirds of Europe’s refugees), just as Mr. Trump was beginning to make headlines by denouncing refugees, Muslims and the countries that tolerate them. And they are both countries that have avoided far-right governments, making them look a lot like Canada and a lot less like Britain or the United States.

Look what happened to Canadians’ views on globalization. Almost three-quarters of Canadians have a “very favourable” view of international trade (and only 4 per cent an unfavourable view), and the proportion of Canadians who believe the North American free-trade agreement has “helped rather than hurt” Canada has risen to two-thirds, its highest level since the agreement took effect Jan. 1, 1994 (with only 18 per cent feeling the deal has hurt the country) and a huge increase over 2008, when the “pro” and “con” views were almost equal.

That sharp uptick in pro-globalization views did not track any particular changes in the Canadian economy or labour market. It did track the sudden rise, south of our border, of trade-war rhetoric and attacks on trade deals and “globalists.”

It appears to have made Canadians favour peacekeeping operations, and oppose military operations, a reversal of 2008 views. It’s even affecting our leisure habits: A quarter of Canadians say they have considered changing their plans to visit the United States, or have actually changed them, “because of the current political climate.”

This presents a challenge for the Liberal government or for any Tories hoping to unseat it. Justin Trudeau’s awkward efforts to keep peace with Mr. Trump while trying to reach a NAFTA compromise could backfire; voters might prefer the kind of overt antipathy to Washington that Stephen Harper delivered.

On the other hand, the temptation of “not-Trump” policies such as taking more refugees or returning to UN peacekeeping will be hard to resist, even though neither makes much practical sense today. And it’s worth remembering that Canadians’ desires may be shaped by a single individual who, we can hope, won’t be around much longer.

The 2018 Canada’s World Survey was created by the Environics Institute along with SFU Public Square at Simon Fraser University, the Canadian International Council, and the Bill Graham Centre for Contemporary International History. 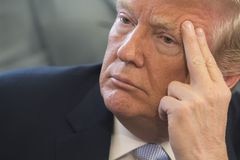 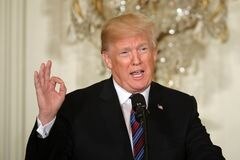 Analysis
With the virtual elimination of presidential Praetorian Guard, Trump can truly be Trump
March 26, 2018 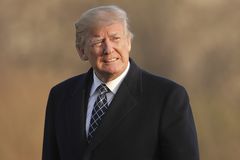