Patrick Luciani is a writer in Toronto.

Today, political apologies are another way of always having to say you’re sorry. In 1990, then-Prime minister Brian Mulroney gave a full apology to Canadians of Italian descent for the internment of Italians during the Second World War. That apology was repeated in 2005 when then-Prime minister Paul Martin planned to pass a bill and spend $2.5-million to educate Canadians about the federal government’s wartime measures against Italians. That bill was never passed with the election of Stephen Harper in 2006. Now, Justin Trudeau wants to make it a hat trick with another apology similar to the ones given to Japanese and Ukrainian Canadians.

Mr. Trudeau’s motives are so apparent to be almost risible. His Liberal Party of Canada has always counted on the loyalty of Italian Canadians; now the Prime Minister needs to lock down their support in October’s coming election.

But apologizing to our community – I count myself a member, being a first-generation Italian-Canadian – is wrong for two reasons.

The first is that Canada was not wrong or malicious in its intention to protect the country in a time of war. To have done otherwise would have shown an extraordinary dereliction of duty to Canada and its people.

Internments started in 1940 when almost 40,000 landed immigrants (now called permanent residents) from Italy came under surveillance in Canada. Of those, 586 Italian-Canadians were sent to internment camps in Canada. Although no Italian was subsequently charged with espionage, there was no doubt that the Italian consulates in Toronto and Montreal were spreading propaganda with elite Italian-Canadians in support of Mussolini’s Fascist government. In the mid-1930s, in fact, money was raised to help Italy’s invasion of Ethiopia.

Some argue it’s not about the numbers but the principle. But what principle? What government wouldn’t take precautions against potential enemy subversives? Italians didn’t become patriotic Canadians as soon as they reached our shores, barely speaking any English and with most of their families still back home. The Italians who arrived before the war were mainly uneducated peasants who came to Canada for the chance to work and support their families. Canadian authorities had no way of knowing how strong their loyalties were; the government took the same precautions as other Allied countries at war. No one denies they faced extraordinary hardships and discrimination as many immigrants do, but they endured because the conditions they left behind were even worse.

Second, politically motivated apologies only infantilize a people with the status of victimization. Our modern political culture is perpetually searching for victims and programs to compensate them with pandering sympathy and false reconciliation. Too often we look to the state to correct the ills of the past by acknowledging that the sins of our ancestors have to be made right so that we can “move on” or find some undefined “closure” for the suffering of past generations.

That kind of apology isn’t worth having; it distorts history and weakens the bonds between past immigrants and their country. Our generation is not responsible for what our Canadian ancestors did or didn’t do. Judging the past with the eyes of the present will never let us truly understand our history. Asking Canadians today to apologize for the judgments of their grandparents, and yes, we are talking predominately about Anglo-Saxons, is an insult to their children and those immigrants who willingly came to this country for a better life.

Do Italian-Canadians really want to join the line of those demanding an apology after everything this country has given them? Do we Italian-Canadians just want a psychic handout to salve our wounded pride? And how can we as Italian-Canadians ask for an apology when 5,000 Canadian men and boys are buried in cemeteries throughout Italy who died to rid “our” ancestral home of fascism and nazism. If we want anything, it’s to avoid having this episode in our history forgotten, but that’s in our hands, not the government’s.

Former prime minister Pierre Trudeau understood that apologizing for the mistakes of the past was a meaningless, never-ending task. The best we can do is to try to learn from our mistakes. Each generation will be judged and, most likely, judged badly by future generations. We can live with that, but without the apologies. That’s a lesson fils Trudeau never learned from his father. 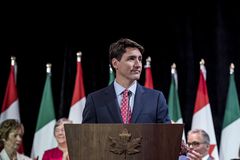