Policy interventions in crises face the age-old challenge of moral hazard – the economic concept that an entity protected in some way from risk will behave differently than if it did not have that protection. Without the proper safeguards, good intentions can lead to unintended outcomes.

The government has deployed a panoply of policy instruments – unprecedented in scope and scale – to address the effects of COVID-19 lockdowns on employment, incomes and liquidity. The aid has been vital for many Canadian households and businesses. And since none of the recipients contributed to the cause of the crisis, moral hazard may not seem to be a top-of-mind concern. But moral hazard is about unintended responses to policy, no matter how well-intentioned the objective. It is present in the government’s actions in this crisis, and needs to be addressed.

First, the Prime Minister’s repeated message that “the government has your back” offered the needed assurance to Canadians that government would help them with their employment and income losses. But the assurance, delivered through the Canada Emergency Response Benefit (CERB) and other direct payments, has turned into transfers to households totalling $65.3-billion in the first half of this year – 150 per cent of the actual employment income losses of Canadians ($44.6-billion), according to the Department of Finance’s July Economic and Fiscal Snapshot. It is as if an insurer agreed to cover substantially more than the actual losses in the case of an accident – something that runs counter to basic principles.

The challenge today is how best to restart the economy with unresolved pandemic risks that may last for many months if not years. The widespread return to work will require appropriate public-health safeguards including testing, tracing, physical distancing, masks and workplace redesign. It will also require that temporary support programs do not create unintended disincentives.

However, that is what CERB and other transfers do. If workers can earn more income staying home safely, there is no economic incentive to rejoin the work force. Moreover, if the perception sets in that government can insure them against all risks all the time, the behavioural response may be resistance to change, including training for new or better jobs. To counter this moral hazard, programs should pivot from solely supporting income to promoting adjustment. This will be an important litmus test for the just announced winding down of the CERB, with changes to eligibility rules to Employment Insurance and new income support measures.

Second, the government has been massively flowing credit and aid to business to help provide liquidity to firms hurt by revenue losses. An inevitable side effect is more and more private sector debt piled on top of corporate and household debt levels that were already worrisome before the pandemic struck. Like many strong medicines, the longer you take it, the greater the chance of addiction. The moral hazard arises from expectations that some temporary assistance will become indefinite, and that some private debt will be forgiven, effectively nationalized. Since the aid is based on the needs of firms – not their economic performance – the further unintended outcome would be a misallocation of both public and private capital, impairing Canada’s long-term growth capacity.

Third, the government is borrowing massive amounts of money to finance its exceptional interventions, with the support of the Bank of Canada and accommodating financial markets. And yet, thanks to historically low interest rates, government debt servicing costs will actually decline this year. It is as if, magically, the added debt is free and unprecedented deficits are costless.

But they are not, and therein lies the moral hazard. We have remortgaged the house to get through the pandemic, as we should, but now we must pay for it, otherwise we are creating intergenerational inequity by effectively taxing future generations for today’s crisis. The way to address this particular moral hazard is a clear and credible economic and fiscal plan.

This brings us back to where we were before COVID-19, but with even greater urgency: the need to innovate, to raise productivity and to be competitive in the global economy. An unprecedented crisis called for extraordinary measures. As we move forward, avoiding or deferring the structural reforms required to grow our standard of living sustainably and inclusively would be the greatest moral hazard for Canadians.

Opinion
COVID-19 could change the way we feed Canadians
July 6, 2020 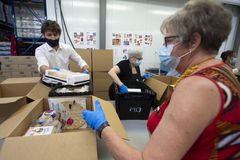