I won’t bore you with a whole column about how open discourse is the lifeblood of a free society. You already know this. Public institutions such as libraries and universities are supposed to be about facilitating a broad exchange of ideas, especially those that provoke and make us uncomfortable. Otherwise, they’re just book clubs.

If these institutions are fulfilling their mandates correctly, it’s inevitable that they will face criticism. Meghan Murphy has also faced criticism. The self-described feminist writer, who is critical of extending certain rights to trans women, has been accused of airing her own subversive agenda recently at the Toronto and Vancouver public libraries.

As a result, not only has Ms. Murphy been the subject of protests, but the libraries that have played host to her events have been condemned for their mere association. Indeed, Toronto Mayor John Tory criticized the library for playing host to Ms. Murphy’s address, authors have pledged to boycott library events, and Toronto City Council has even voted to review the library’s room-rental policy – all because a public institution fulfilled its mandate to facilitate an open exchange of ideas.

This, in essence, is the failing of so-called “cancel culture,” which declares whole people – not simply their ideas – black or white, good or bad, and taints other people or institutions by their association. A bad opinion becomes synonymous with a bad person, and the effect is communicable.

Ironically, for all the furor Ms. Murphy’s events have garnered, her views are not terribly original or incisive. Her basic thesis is that trans women are not “real” women and thus to afford them equal treatment (including access to women-only spaces) undermines the rights, and potentially the safety, of women and girls born female.

No doubt some Canadians see this as a reasonable perspective: If a woman born female who has been abused by a male partner goes to a rape crisis centre, for example, she shouldn’t have to share a shelter space with a trans woman. (This is, in fact, the position of the Vancouver Rape Relief and Women’s Shelter, which lost its municipal funding because of this policy.)

At the same time, it’s not hard to see why Ms. Murphy’s diatribes are offensive, particularly since she makes a point of referring to trans women as “men” and seems to shrug off their suffering. Although her critics say her views are motivated by hatred, if you actually listen to Ms. Murphy speak for a few minutes, it seems more likely that her zealous concern for the welfare of women born female is the stimulus behind her views on trans women. That doesn’t excuse bigotry, of course, but it does make it more complicated to write Ms. Murphy off as wholly “bad.” This is the nuance that blanket boycotts overlook.

Former U.S. president Barack Obama actually spoke to this idea at an event last month when he decried the trend “among young people, particularly on college campuses,” to parade their virtue by calling out others.

“The world is messy, there are ambiguities,” he said. “People who do really good stuff have flaws.”

Mr. Obama’s comments were shared enthusiastically by those on the right, who seemed to take his monologue as a repudiation of his own team’s tactics. But “cancel culture” is hardly a left-wing phenomenon, nor is it a young-person-on-a-college-campus phenomenon, for that matter.

The Dixie Chicks, for example, were blacklisted by radio stations, dropped by their tour sponsor and subjected to death threats in 2003 after lead singer Natalie Maines told a London concert audience that she was ashamed that then-U.S. president George W. Bush was from her home state of Texas. Former fans subsequently used a bulldozer to crush the group’s CDs.

Comedian Kathy Griffin’s career was derailed (albeit temporarily) when she posed with a severed mannequin head of U.S. President Donald Trump back in 2017. And quarterback Colin Kaepernick has been relegated to the NFL sidelines for years for taking a knee during the national anthem to protest police brutality against black Americans.

Eventually, one would think, we would all tire of this routine, which seems to achieve no positive, tangible result. That in a moment of lucidity, we’d ask ourselves why we’re fighting with a public library or rolling our tires over a CD case because someone, somewhere, said something unacceptable.

With the exception of clearly hateful views, there’s usually a lot more nuance to bad opinions than those calling for boycotts of certain people – and boycotts by association – would allow. And in cases like Ms. Murphy’s, those “bad people” are never really cancelled. If anything, they end up amplified. 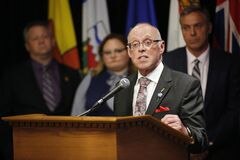 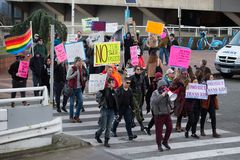 Vancouver gender identity event moved to new venue over security risks, organizer says
Subscriber content
November 1, 2019
Follow Robyn Urback on Twitter @RobynUrback
Report an error Editorial code of conduct
Due to technical reasons, we have temporarily removed commenting from our articles. We hope to have this fixed soon. Thank you for your patience. If you are looking to give feedback on our new site, please send it along to feedback@globeandmail.com. If you want to write a letter to the editor, please forward to letters@globeandmail.com.
Comments