For many families battling the turbulent storm of last spring’s lockdown, digital devices provided islands of calm; children parked on them were finally quiet, content and undemanding.

A Statistics Canada survey of parents across Canada found that screen time trumped all other activities – including games, reading and physical activity – among their kids last spring, while research out of the University of Western Ontario estimates that school-aged kids in Ontario were spending a daily average of 5.8 hours on screens, not including online schooling. That’s concerning to experts who find negative correlations between excessive screen time and children’s mental, physical and emotional wellbeing.

Now that school has resumed, parents are being advised to rein their kids back in. That’s not easy at the best of times given the ubiquitous and addictive nature of the devices in question. And pandemic schooling, with its heavy reliance on screens, is making it virtually impossible.

The pandemic has turbocharged digital education, driving hundreds of thousands of Canadian school kids into their homes to receive e-learning, but also providing a rationale to dramatically increase the use of devices in schools. Online learners can transition more easily to remote learning in the event of quarantines or further lockdowns, so the reasoning goes, and devices reduce the possibility of fomite transmission in the classroom, with no paper passing between teacher and student.

“It’s kind of like online learning,” said my Grade 7 son, after his first week back at school, “except that we’re in school.” He was going to school armed with both a laptop and a phone, claiming this was the requisite rig. By the second week, he was requesting earphones as well; his teacher had suggested listening to music when doing “boring” work.

In the intervening months, my son has shown me the online assignments, tests and projects that constitute most of his schoolwork. Videos are regularly shown in lieu of instruction, digital flash cards are used to teach French, and inane online texts followed by multiple choice questions that glow when answered correctly are used to hone reading skills. Many of the online learning resources are riddled with factual and grammatical errors while random blog entries are used for literary analysis. Recently, my son showed me an assigned text that culminated in this statement: “Bullying is a highly underestimated subject with long term problems following it’s tail.” He was struggling to identify the metaphor.

With material of this quality, it’s hardly surprising that students are using the propped-up laptops on their desks as visual shields to conceal the phones vibrating madly in their laps. This is the 21st-century equivalent of note-passing. Throughout the day, my son and his classmates send TikToks back and forth, plan their upcoming mask breaks (de facto recess) and gather online to play rounds of “Among Us,” the video game du jour, relieving the boredom of class with quick virtual trips to outer space to kill each other.

This is not meant to blow the cover on one particularly deviant class, but rather to note a new variation on an old theme: student subversion of classroom technology. In Grade 4, my son’s teacher regularly rewarded good behaviour with 20 minutes of unfettered access to YouTube at the end of the day, leaving the class to view a trove of vile online content that had slipped through the school board’s filter.

Despite such aberrations, schools – and parents – have been quick to embrace technology in the classroom. Educational authorities rave about its potential to foster digital fluency, global competency and deeper learning. The overarching concern has been about equity: ensuring that all kids have equal access to the digital goods.

While there’s no question that screens can be put to creative, innovative, horizon-expanding use in the classroom, it’s important to keep honest. At school, as at home, technology can be used to simply keep kids busy. That’s a very attractive proposition to a teacher of 27 students left under-exercised and over-screened by a pandemic. But the challenge of the moment is to combat, not to indulge, their dependency.

As its role in education expands, the use of technology should be subject to rigorous oversight. Teachers need more guidance on how to make productive use of the ever-increasing range of digital tools at their disposal. School boards should consider throwing less money at new devices, and more at teacher training and support.

And we have to stop thinking about screen time in terms of quantity. The Canadian Paediatric Society’s recommendation of a daily maximum of two hours of recreational screen time for school-age kids hardly applies in a world where devices have crept into every aspect of their lives. The real question is one of quality: What is being gained through the use of screens and what is being lost? It needs to be asked at school as much as at home.

All that excess screen time parents were told not to worry about at the start of COVID-19? It’s time to worry
October 29, 2020 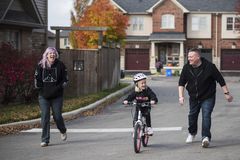 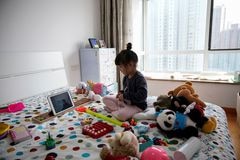 How to start weaning your kids off screens before school starts
August 17, 2020 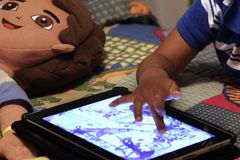