Bill Chu is the founder of Canadians for Reconciliation Society. Thekla Lit is founder and president of B.C. Association for Learning & Preserving the History of WWII in Asia (ALPHA). Victor Ho is co-founder of Vancouver-based Media Analytica Inc.

Canadians of different heritage are often identified by prefixes – Anglo-Canadians, French-Canadians and Japanese-Canadians are mentioned with nary a blink. So the term “Chinese-Canadian” shouldn’t be any different, right?

Perhaps not. Canada has a history of neglecting that term when “Chinese” people were treated with a broad and discriminatory brush that can’t be ignored or forgotten. And now, as Chinese-Canadians increasingly risk being perceived – fairly or not – as foot soldiers for a belligerent Beijing, that term and the historical nuances that are too often elided must be more deeply understood by Canadians at large. That’s an especially urgent lesson now, as China launches trade broadsides against the United States, detains Canadians after the arrest of Huawei executive Meng Wanzhou, and has been influencing the overly broad diaspora on the world stage.

Even after 1871, when the Crown colony of British Columbia formally became a Canadian province, B.C. continued the practice of treating all people of colour as aliens, including the Chinese. Many discriminatory acts were passed to restrict Chinese employment, franchise and immigration. The Alien Act of 1861, the Alien Ordinance of 1867, the Alien Labour Act of 1897 and so forth specifically referred to “Chinese” as aliens. Other legislation would sometimes refer to them as “Mongolians” instead.

Such alienating labels reinforced the belief that Chinese people were incapable of integrating into Canadian society, fuelling a century of legislative discrimination against them. And so, even though the Chinese presence in B.C. was recorded as early as 1788, these Canadians were disenfranchised until 1947, and there was no political will to refer to them as anything but “Chinese”.

After the removal of the last discriminatory policy against the Chinese in 1968, the Chinese-Canadian community was too preoccupied with establishing some foothold in society to worry about the subtleties of often not being referred to as “Chinese- Canadians”. The reopening of immigration to Canada from places such as Hong Kong, Taiwan, Singapore, and indeed China’s mainland brought waves of newcomers to Canada and made the overly inclusive categorization of “Chinese” stretch even more thinly. These places, after all, are distinct: there is diversity not just in their languages, but in their histories, cultures, economic status and, more importantly, their opinions about the Communist Chinese government.

Despite a recent University of Hong Kong survey that found only 11 per cent of Hong Kong people identify themselves as Chinese, China has been only too happy to use Canada’s expansive definition of “Chinese” as a beachhead to establish China’s influence in Canada, which comes in handy when putting pressure on Ottawa. By continuing to celebrate links with the motherland through Chinese-language media, associations and businesses, and by enticing more with business opportunities in China, Beijing has succeeded in snuggling up and recapturing the hearts of many Chinese-Canadians.

This is a fairly remarkable feat, considering many Chinese left China for freedom or to seek a better life elsewhere, and China has formally disowned them since 1980, when its Nationality Law rejected dual nationality among its citizens. And while China exploits nationalist ardour through many local “Chinese" cultural events, it ignores constructive criticism e.g. for democracy from other “Chinese” groups.

The use of “Chinese” instead of “Chinese-Canadians” erases the line between ethnicity and nationality, and boosts the perception that there is a large homogeneous group that supports Beijing. In turn, this increasingly raises suspicions of Canadians at large around all “Chinese-Canadians”, even when they come from different homelands.

So, while China’s rise has emboldened some ”Chinese” – including the more than 200 Chinese-Canadian organizations which paid for a full-page ad on June 21 in Vancouver’s and Toronto’s Chinese-language newspapers castigating protesters in Hong Kong – it has also caused much grief to others, especially those who fled China for places such as Taiwan and Hong Kong and who might oppose Beijing’s dictatorial regime or its heavy-handed approach to a Hong Kong decades away from its agreed 50 years without change. And when “Chinese” are mentioned in local contexts, such as real-estate speculations or money laundering, things only become worse for vast swaths of Chinese-Canadians who have nothing to do with such practices.

As identity politics undermines the identity of some “Chinese” while fostering other “Chinese” geopolitical goals, Canadians need to understand the shifting pressure within the Chinese-Canadian community and avoid falling into the trap that has been set. It is only through identifying the varied interests that we can truly approach unity within our diversity. 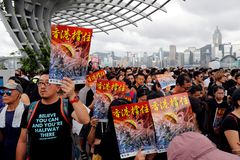 Hong Kongers in Canada seek to distance themselves from China
June 19, 2019 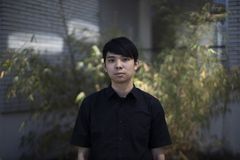 Chinatown Through a Wide Lens: The hidden photographs of Yucho Chow tell the stories of ignored Canadians
May 12, 2019 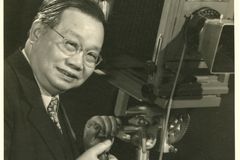