John Allen is an anthropologist and writer based in Kentucky. He is the author of The Omnivorous Mind: Our Evolving Relationship with Food and Home: How Habitat Made Us Human.

There are perfectly good nutritional reasons for New Brunswick’s decision to ban chocolate milk in schools (as well as all other flavoured milks and juices.) With overweight and obesity rates at 30 per cent in Canadian children between ages 5 and 17, it makes sense for schools and local governments to encourage the consumption of less sugary drinks and foods.

Still, for some, this news will be met with pangs of nostalgia. The memories of having chocolate milk in a school cafeteria – the ritual of putting the straw in the little cardboard box (always tricky to open) and enjoying a special treat with friends – this collective experience of Canadian school children may soon be a thing of the past. Chocolate milk is not just an incidental part of this nostalgia; in fact, I’d argue that chocolate milk has a central cognitive role in these kinds of emotionally rich memories.

There are several reasons why this should be true. To start, evolution has seen to it that food is a special target of memory formation. After all, for any animal, remembering where your last meal came from is critical for finding the next one.

A small brain structure called the hippocampus (one in each hemisphere) is critical for forming new memories. We know this to be true because when the hippocampus is selectively destroyed or injured in some way, memory problems develop.

There are several different kinds of memory, and in humans, the hippocampus is associated with the formation of what are called declarative memories. These are the memories that you can consciously recall and help form the continuing internal narrative of your life in your mind – that movie about you that plays nonstop in your head. In other animals, the hippocampus is important for the formation of spatial memories, which is critical for remembering the locations of food resources. The hippocampus has strong connections to parts of the brain involved with the regulation of emotion and smell, which helps explain why emotional memories can be so powerful or why an odor can trigger the sense of a recollection even before it consciously registers.

Now, let’s look again at the childhood experience of having chocolate milk as a treat in school. For those who recall this fondly, the associated emotion is clearly happiness. But it is likely that beyond this overt feeling, there are also background emotions, such as comfort and security, that come into play. Drinking chocolate milk with your fellow students is a pleasurable communal event. As social animals, humans derive positive feelings from being a part of a community engaging collectively in an enjoyable experience. Obviously, drinking chocolate milk in school does not stimulate a “big” emotional response, such as the red-hot anger one might feel after being punched in the nose unexpectedly, but positive emotional events experienced on a daily basis have a way of becoming profoundly memorable.

From the perspective of memory, foodstuffs in general clearly are something special. The hippocampus has direct links with the digestive system, via hormones that regulate eating behavior and appetite. These links undoubtedly bias the brain toward forming food-related memories and support food-related learning.

Sugar, or too much of it, is the main reason that chocolate milk is being banned from school menus. It is also probably the main reason children like it so much. We humans have a preference for sugar, a natural sweet tooth. Many of our primate ancestors were fruit eaters and their dietary preferences lead them to seek the carbohydrates found in ripening fruit.

This is a problem because we still have the basic dietary preferences of our ancestors, and one of them is for sweeter items over those less sweet. The consumption of sweet foods pushes a “button” in our brains, activating the reward pathways. One of the most well-known neurotransmitters involved in reward is dopamine. Dopamine is also active in the hippocampus, helping to turn short-term memories into long-term ones. The mental reward we get when we eat a piece of cake or drink chocolate milk may be one reason these sweet memories of the past are so powerful.

Now, I don’t want to make it seem that how and what we eat is all neuro-buttons and brain pathways. As a species, human beings are truly omnivorous – we eat just about anything. But what individual people eat, and the items they consider to be food rather than non-food, is determined largely by the cultural environment in which we grow up. I have proposed that people have a theory of food that develops, much like a first language, during the critical childhood years. We learn how and what to eat as children, and this collection of habits and preferences defines our dietary universe. Can we change our theory of food? Of course, just in the way that someone can learn a second or third language. But, like learning a non-native language, this can be hard.

Chocolate milk is definitely a food of childhood. As adults, we move on to other beverages, which have their own reward pathways in the brain. But if drinking chocolate milk in school had an important role in your childhood diet, then even if you don’t drink it as an adult, it may be gone but truly not forgotten. Your memories of chocolate milk are reinforced by the happiness you felt receiving the treat, the quiet satisfaction of sharing it with friends, the sweet taste of the food itself and the fact that your exposure to it in childhood occurred when your brain was forming vital connections that would define your long-term view of the food world. Combine this with drinking it in school, a place many children consider a second home, then it is no surprise that it is sad for some adults to hear that the children of the future may not have access to chocolate milk. This is akin to the mini-mourning of homesickness. Of course, you know that you cannot go back to primary school and enjoy the treat of chocolate milk, but now that place, and that happy treat, no longer even exist. The children of the future will never feel that loss, but you will. 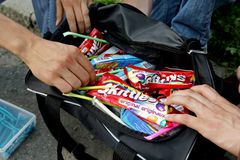 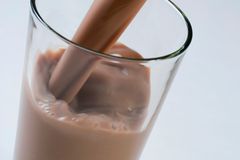