Well, this is quite the Christmas surprise. Christianity Today – perhaps the most influential publication in the evangelical world and described by The Washington Post as “evangelicalism’s flagship magazine” – has called for U.S. President Donald Trump to be removed from office.

In a staggeringly forthright editorial signed by editor-in-chief Mark Galli, the extended article said: “The President of the United States attempted to use his political power to coerce a foreign leader to harass and discredit one of the President’s political opponents. That is not only a violation of the Constitution; more importantly, it is profoundly immoral.”

It went on to address the evangelical world’s overwhelming support of the now impeached President. “Trump’s evangelical supporters have pointed to his Supreme Court nominees, his defence of religious liberty, and his stewardship of the economy, among other things, as achievements that justify their support of the President," but “to the many evangelicals who continue to support Mr. Trump in spite of his blackened moral record, we might say this: Remember who you are and whom you serve. Consider how your justification of Mr. Trump influences your witness to your Lord and saviour. Consider what an unbelieving world will say if you continue to brush off Mr. Trump’s immoral words and behaviour in the cause of political expediency.”

Christianity Today was founded by evangelist Billy Graham in the 1950s and now has a readership of around 260,000. Its influence, however, extends far beyond those numbers, and while it has limited command of the extreme fundamentalist wing of the church, it’s highly regarded by most mainstream evangelicals. This matters, because 81 per cent of white evangelicals voted for Mr. Trump in 2016, so while they make up just about a quarter of the U.S. population, their sway within the Republican Party is far greater than that.

Mr. Galli himself is an interesting figure. He comes from outside of the Baptist, Pentecostal, charismatic and non-denominational evangelical movement where most on the Christian right worship. He was a Presbyterian minister for a decade and then became an Anglican – something that his detractors are certain to highlight in the days to come.

Prodigal son Franklin Graham has already made his opinion clear about the editorial. “My father would be embarrassed. It is not going to change anybody’s mind about Trump,” he said. “There’s a liberal element within the evangelical movement. Christianity Today represents that.”

He’s wrong, however. There certainly is an evangelical left, but it’s to be found in magazines such as the social justice-minded Sojourners, not Christianity Today. But then again, the left might feel radical and at the footsteps if, as Mr. Graham has, you’ve argued that Muslims should be banned from the United States because Islam is “very evil and wicked” and that LGBTQ people be barred from churches because Satan “wants to devour our homes.”

His friend the President tweeted that the magazine was “far left” and “would rather have a Radical Left non-believer, who wants to take your religion & your guns, than Donald Trump as your President.” Mr. Trump is, as usual, severely ill-informed and hysterical. What makes this editorial so extraordinary is that Christianity Today routinely stays clear of party politics; it has been criticized by many Christians for being too passive under the Trump administration.

So what happens now? In a recent poll by the Public Religion Research Institute, almost 99 per cent of white evangelical Republicans said the President’s impeachment was wrong, and their support for Mr. Trump has shown no clear signs of diminishing.

Some of them deny that he is unethical; others admit his failings, but compare him to historical leaders such as the emperor Constantine, who may have been personally flawed but enabled Christianity to flourish. Others still dislike the man, but fear what they see as an increasingly left-leaning Democratic Party coming to power.

The week leading up to Christmas will likely witness an organized and fierce campaign against Christianity Today and its editor; as a target of attacks from the Christian right myself, believe me when I say that there’s none so angry as a fundamentalist scorned.

But the window has been opened, and some light has entered the debate. What happens next will be vitally important. Mr. Trump doesn’t care what liberals, celebrities or journalists think of him, but evangelical Christians matter a great deal. If he loses even some of them, the 2020 election could be rather different. 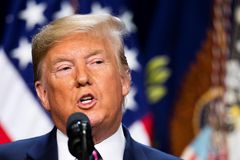