Finance Minister Chrystia Freeland faces growing concerns among some of the country’s leading economic thinkers that she is not taking her job seriously enough.

The nonchalance with which Ottawa is taking on hundreds of billions of dollars in new debt is starting to make business leaders antsy. Opening the floodgates was the right approach in April. Keeping them open indefinitely looks reckless.

Yet, Ms. Freeland and Prime Minister Justin Trudeau have spent the past few weeks promising just that. In the run-up to next week’s Speech from the Throne, they have given little indication that they intend to heed calls to produce an exit strategy from unprecedented spending levels. To many budget watchers, it is starting to look like the bad old days of runaway deficits all over again.

With the federal deficit already hurtling toward $400-billion this year, or nearly 20 per cent of the country’s gross domestic product, Canadians risk a rude awakening once the pandemic subsides and financial markets begin once again focusing on economic fundamentals. The twin engines of growth that sustained our standard of living after the last recession – energy and real estate – face grim prospects. Betting on some kind of “green recovery” is a pipe dream.

The suggestion that Canada can simply substitute what has been its main source of wealth-creation – oil – with an equally lucrative carbon-free one, is sheer fantasy. An energy transition may be under way. But it will take decades to complete. In the interim, the country must prepare for the long drought in oil prices that will make climbing out of this downturn much harder.

That point was driven home in stark fashion this week by former Bank of Canada governor David Dodge. In an essay for the Public Policy Forum, accompanied by an op-ed in The Globe and Mail, Mr. Dodge notes that Canada’s economy was already facing weaker long-term growth prospects before COVID-19 drove it to its knees.

Indeed, Canada’s net non-energy exports never recovered from the last recession. Where we long enjoyed a trade surplus in autos before the last recession, Canada was posting a $22-billion trade deficit in that sector by 2019. Despite its demonization, the oil and gas sector has remained the country’s biggest and most dependable source of exports. Net energy exports last year amounted to $77-billion. Oil accounted for 80 per cent of the total.

The prospect of anemic oil prices for years to come should be a cause for considerable consternation in Ottawa. Canada had been running a current account deficit for 11 straight years before the pandemic struck. The current account measures how much Canada sells to the rest of the world, minus what we buy from other countries, with net investment flows tacked on. No country can run a chronic current account deficit without eventually facing a run on its currency or, in the worst-case scenario, a debt crisis.

“A permanently rising current account deficit is not sustainable,” Mr. Dodge insists. “Inevitably, at some unforeseen moment, it will bite us in the back.”

Canada’s current account deficit, which has hovered around 2 per cent of GDP in recent years, is set to explode as oil exports crater and government debt loads soar. Mr. Dodge estimates that Ottawa and the provinces are on track to borrow $600-billion this year, pushing their combined debt-to-GDP ratio to 90 per cent. Since foreign investors account for a large share of the buyers of Canadian government debt, interest payments on that debt will widen our current account deficit.

Billions of dollars in federal and provincial debt must be refinanced every year. Betting on interest rates to remain at today’s levels for years to come is like playing poker with the country’s finances. What happens if our luck runs out?

“Should these purchasers of our debt at some point grow nervous about our economic prospects, history shows they could demand the additional protection of foreign-denominated loans or higher interest payments,” Mr. Dodge warns. “Unless governments adopt credible plans to rein in borrowing (either through expenditure cuts, tax increases or a persuasive growth plan) lenders could eventually force a restructuring of our debts, as we saw in Asia in 1997-98, and in peripheral Europe in 2014-15 and are witnessing again today in Argentina.”

Mr. Dodge concedes that Canada is “not yet anywhere close to keeping that company.” But as someone who had a front-row seat the last time Canada faced a currency crisis, when he served as deputy finance minister in the mid-1990s, he is better positioned than most to know what Ottawa needs to do now to make sure we do not end up joining the club. 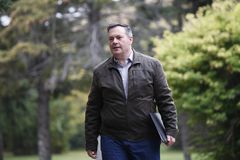