Britt Wray is a postdoctoral fellow at Stanford University and the London School of Hygiene & Tropical Medicine, where she investigates the mental-health consequences of ecological disruption. She is the author of Generation Dread: Finding Purpose in an Age of Climate Crisis.

Climate anxiety is on the rise. The American Psychological Association defines ecoanxiety as “the chronic fear of environmental doom,” and this is a climate-specific form of that feeling. I research the mental-health consequences of the ecological crisis, and the literature says that young people feel climate anxiety particularly acutely.

In order to better understand the scope and burden of it on young people, last year my colleagues and I surveyed 10,000 young people, between the ages of 16 and 25, in 10 countries around the world: Australia, Brazil, Finland, France, India, Nigeria, the Philippines, Portugal, Britain and the United States. Even for academics who think about the psychological effects of the climate crisis for a living, we were alarmed by what we found.

Our study, published in The Lancet, shows that 45 per cent of young people reported that climate change negatively affects their daily life and functioning. This means it interferes with their ability to eat, concentrate, sleep, go to school, spend time in nature, play, have fun or be in relationships. Seventy-five per cent of our respondents said the “future is frightening,” 56 per cent said “humanity is doomed,” and 39 per cent said climate change makes them hesitant to have their own children. More than half reported each of the following emotions: sad, anxious, angry, powerless, helpless and guilty.

These aren’t the only challenging emotions that the climate crisis conjures. Climate grief is the grief some people feel because of the ineffective progress world leaders have made over decades to curb the crisis, particularly when reckoning with all that is now being lost as a result (species, landscapes, lives and livelihoods and the confidence in humanity’s futurity). In the rapidly expanding field of climate psychology, those who feel it are referred to as “climate aware” people who’ve gone through a climate “wake up” moment of profound emotional turbulence. Often, this is because grappling seriously with the severity of the climate predicament causes a person to acknowledge that they must move on in the face of horrifically unjust events, ones they can’t control because of the overwhelming nature of the problem.

But climate grief can be constructive. Much like the grief felt when a loved one dies in tragic circumstances, “climate aware” people often say that their climate grief led them to a process of internal transformation. Consider Candice Lightener, the Californian mom who founded Mothers Against Drunk Driving (MADD) in 1980 after her daughter was killed by an intoxicated motorist. Writer Elizabeth Rush tells us that “the only way to survive grief is to care for what remains with even more heart than before.” Creating an advocacy group to protect others from the grave consequences of drunk driving is one way to do that.

With respect to the climate, so is starting the Climate Emergency Fund, a safe and legal means for donors to support front-line climate activists. It was founded by clinical psychologist Margaret Klein Salamon after she’d processed her own climate grief. She also runs a project called Climate Awakening, which exists to support others with their own distressing climate emotions so they can harness them for action.

In any case, whether we feel optimistic about the climate or not, difficult climate emotions are here in great proportion. They need to be addressed.

I don’t tell you all this, or do this work, to depress you. The world has its fill of darkness these days. I do this work to bring a perversely disavowed truth into the light, so we can do something about it. The kids are not all right. As many young climate activists have said, on their protest signs and before the courts, they feel terrified and betrayed. One student striker’s sign put it this way: “We won’t die from old age. We’ll die from climate change.” Another’s asked: “Why should I study for a future I won’t have?” Our research backed this up and found that climate anxiety was significantly correlated with the perception of being lied to by leaders and betrayed by governments. How could young people not be expressing such pessimism when the World Health Organization, UNICEF and The Lancet issued a report in 2020 declaring all children in the world now face existential threats from ecological degradation and the climate crisis, and that no country in the world is adequately protecting children’s health?

The ability to make this situation better depends entirely on what responsibility is taken now for these trends. Responsibility looks like meaningful climate action and intentionally instilling care in our culture so we can adapt compassionately to the harmful effects of historical inaction. What my research has taught me is that difficult climate emotions can play a pivotal role in moving people toward taking responsibility, but that they must be approached with incredible sensitivity.

The thing is, the climate crisis indicts the present world order and makes people think of death.

Terror management theory is based on the work of anthropologist Ernest Becker and explains why this presents us with a profound psychological problem. Dr. Becker argued in his Pulitzer Prize-winning book The Denial of Death that most human behaviour is driven by an avoidance of confronting one’s own inevitable annihilation.

Our awareness of our own mortality, he argues, is so profoundly unnerving that we unconsciously repress it at any cost to buffer against the discomfort it causes us. So universal is this manifestation of our death denial that it shapes all human stories and mythologies, cultures and religions, with their focus on what the afterlife entails.

According to this theory, this is why we create more evil as we believe we are fighting it. Sectarian forms of violence often boil down to people killing each other over a struggle of cultural symbolism, the only thing that can transcend one’s own insignificant, fleeting time on Earth.

We are deeply disquieted animals, programmed for self-preservation. We’ll do almost anything to avoid the terror we feel when reminded that we’re going to die.

That’s why difficult climate emotions must be approached with great care. If people’s defences are raised, they might dig their heels in hard on the side of avoiding climate reality, which prevents responsibility and thwarts action. Comfort for now, nightmare for later. But if these difficult emotions are “contained” – psychologist-speak for “given a safe space in which to be explored and processed by sharing with others in a non-judgmental and validating setting” – things start to open up.

I saw this happen again and again as I was writing my new book. The containment played out in different settings: parent-child relationships, therapists’ clinical cases, professional climate groups – and even an annual meeting of fossil-fuel executives.

I was once invited to give a talk about the psychological forces that interfere with how we address the climate crisis to a network of Nordic energy executives, several of whom worked in the coal, oil and gas sectors. My intention was to approach them with an open mind, to explore ideas with compassion for what they do and not to take a moral high ground. I was trying to see their complex humanity behind the corporate titles, and speak directly to them in a way that would create space for authentic emotional engagement.

In my talk, I discussed what I call the spectrum from denial to distress. Backed by internal oil company memos, I laid into the outright denial and intentional misinformation that’s been funded for decades by the fossil-fuel industry. I shared psychoanalytic research about the soft climate denial most people unwittingly peddle in, how existential terror affects our behaviour and relayed some of my own climate anxiety. It became strong a few years ago when I was seriously grappling with the question of whether it was okay to have a child in a climate emergency. I wrapped up the talk with evidence about the emotional turmoil many children, quite likely the same age as these executives’ children, are now feeling with respect to their futures.

At the beginning of the Q and A with my (entirely male) audience, I had to bear an incredibly awkward and long pregnant pause before one executive cleared his throat and said, “I think it is very emotional for us to be reminded of the terrible things that we do.” I gently encouraged him to say more, but the silence resumed. Then another executive piped up to say, “I think I am of the generation where I will die of old age and not climate change, but that doesn’t bode well for my children.” Things were getting tense and it wasn’t long before the host abruptly adjourned the annual meeting.

Later that evening, I received a couple of e-mails from attendees who explained that my talk was a lot for them to take in, and they were simply at a loss for words. As one chief executive wrote: “My feelings around the subject as a whole: Armageddon kind of feeling.” Another said they’d never talked about such things before. So I was intrigued then, when some weeks later, I got a note from my agent telling me that this client’s evaluation of my talk had come in: They gave it a grade of 100 per cent.

It’s okay to feel scared, angry or sad about what is happening. These feelings show that you care and are connected to reality. Even fossil-fuel executives can get in touch with their difficult climate emotions. It all goes to show that we can do this – we can have these hard conversations – and be left strengthened by them, if we can recognize, validate and embrace what climate anxiety and grief have to teach us. They are powerful navigational tools for making uncomfortable changes, and it is time we all learn how to harness them for positive environmental and social development. 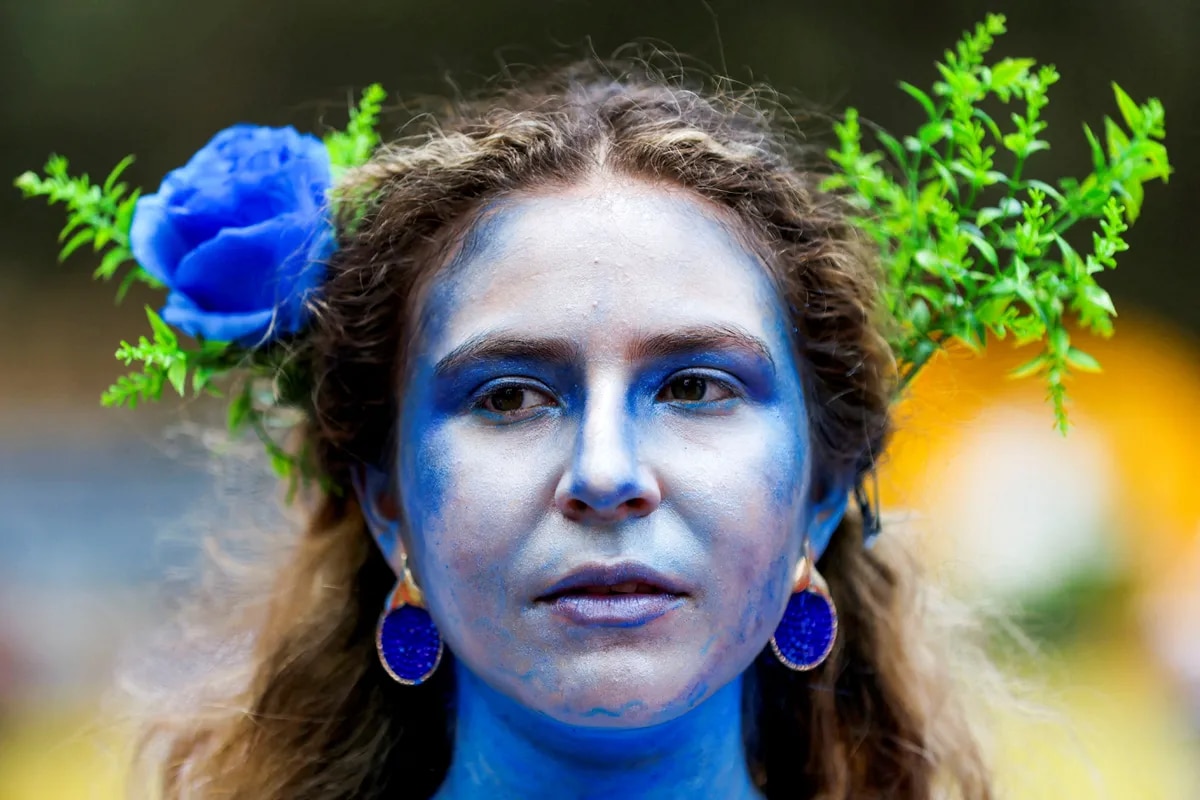 You, too, can be a climate optimist

The growth of cheap, abundant solar power is a reason to get excited about preventing catastrophic climate change, author Chris Turner writes

UN launches plan to boost use of renewable energies as climate concerns mount: ‘Time is running out’
May 18, 2022
Ottawa proposes one-year timeline for returning victims of climate disasters to normal life
May 16, 2022
Resilient infrastructure, faster disaster recovery needed to adapt to climate change: experts
May 16, 2022