Well, you can’t say he didn’t work for it.

Ever since Donald Trump emerged on the scene, Conrad Black – also known as Lord Black of Crossharbour – has been wielding his formidable pen to praise, flatter and fawn all over the most bizarre President that America has ever produced. He has written countless newspaper columns and even an entire book praising The Donald. People used to joke that he was doing it for the pardon. Whatever the reason, it worked. According to Mr. Black, the President called him to give the good news. Mr. Black said Mr. Trump told him the pardon would “expunge the bad rap you got.”

Does the word “lick-spittle” come to mind? In other circumstances, Mr. Black has most likely used that word. I doubt he ever dreamed that one day it might apply to him.

Mr. Black is now loudly proclaiming his innocence. “I am now, at last, officially not guilty even in the conviction-mad United States,” he wrote on Wednesday in the National Post, a newspaper he used to own. Not only has he been pardoned, by his own account he was never really guilty in the first place. “It was nonsense, all of it; there was never a word of truth to any of it.” According to his telling, his conviction for fraud and obstruction was the product of a vengeful U.S. justice system run amok. The alleged victims are not the actual victims, he says. He’s the victim. “My long ordeal with the U.S. justice system was never anything but a confluence of unlucky events,” he wrote.

But Mr. Black is not correct when he says the pardon restores his innocence. A pardon takes no stand on that. Here’s what the U.S. Department of Justice website has to say: “A pardon is not a sign of vindication and does not connote or establish innocence.”

Mr. Black believes he paid full measure for what he did, and then some. Even Black-haters are inclined to believe justice was served. The crimes – Mr. Black was found guilty of three counts of mail fraud, two of which were overturned during the appeals process, and one count of obstruction of justice – were not particularly ingenious, or even, by today’s standards, all that lucrative. For that, he ultimately went to jail for three years. He lost his reputation, his businesses and, eventually, most of his fortune. The Ontario Securities Commission barred him from ever owning a public company in the province again. He lost his right to travel to the United States. He lost his access to moneyed society. He lost his Order of Canada. He even sold his mansion in the luxurious Bridle Path neighbourhood in Toronto. He still lives in it, but he’s just a tenant.

It was a cheap crime for which he paid a Cadillac price.

The most valuable thing he didn’t lose was his soapbox. He made good use of it.

From the comments: ‘Boy, do the rich ever look after themselves.’ Readers disagree over Trump pardoning Conrad Black

In other words, Mr. Black makes the President sound not unlike himself.

Not even his readers take these paeans to presidential greatness seriously. But Mr. Black was writing only for one reader. Whenever he was asked if he was fishing for a pardon, he would say the suggestion was outrageous. But he must have known Mr. Trump was susceptible to that kind of flattery. And he was extremely fortunate that they had a personal relationship. (Mr. Black and Mr. Trump have done business together, and Mr. Black and his wife, Barbara, attended Donald’s wedding to Melania back in 2005.)

Mr. Black is too old to make a comeback. He will never recapture his exalted social status either. Although he is still Lord Black of Crossharbour, the days when he and Barbara dressed up as Cardinal Richelieu and Marie Antoinette are gone. No doubt, he will be welcomed by the kind of moneyed men who live in the vicinity of Mar-a-Lago – the kind of men who hang around with Donald Trump. It’s not the A-list. It isn’t even the C-list. But in his own mind at least, he’s vindicated. And that’s all that counts. 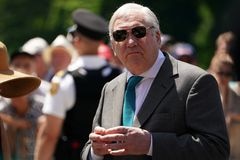