Robert Danisch is an associate professor at the University of Waterloo’s Department of Communication Arts.

Conservative politicians across Western liberal democracies have long been clear about the value that drives their policies, campaigns and governing priorities: freedom. Perhaps the reason that conservative politicians have been so successful in the last 50 years in Canada and the U.S. is the clarity and conviction with which they tout their belief in, and commitment to, freedom. We prize our freedoms, want to protect them and snap at those who might curtail them.

That commitment to freedom, and personal responsibility, has most often manifested itself in economic policy. Conservatives see taxation and government regulation of business as an unfair infringement on freedom. This has led to the position, which was articulated most loudly by Ronald Reagan, that the goal of conservative politics is to shrink the influence of government on our everyday lives. The most notable aspect of Doug Ford’s campaign to become premier of Ontario was that he offered no party platform and no concrete policy suggestions.

Now we are all living through a devastating pandemic that has wrecked our economy and our personal lives, and left too many dead. As cheerleader-in-chief, Mr. Ford has performed the rituals of his office adequately. But as policy maker and steward of the systems of government, he has been an unmitigated disaster. We could say Mr. Ford hasn’t been as bad as someone such as Governor Kristi Noem of South Dakota, who refused to mandate safety precautions for a state that was recently the U.S.’s pandemic epicentre. But surely we should expect more from our government.

Public health is not a matter of personal responsibility or freedom; it’s the government’s job. But because conservative politics are so deeply wedded to the ideals of personal responsibility and freedom, the Ontario government has been uniquely incapable of responding to COVID-19. Conservatives have flipped the script from the idea that governments create laws and rules to help us solve collective problems, to the belief that government rules and laws need to be restricted because they limit our freedoms. Given how badly damaged we’ve all been by this pandemic, how can any of us remain wedded to that set of beliefs?

We need government to solve the large-scale, complex, multi-dimensional, collective problems that we face. The political stripes of a given government – right, left, centrist – shouldn’t matter, and we ought to acknowledge that different political ideologies may have effective suggestions for how to govern. Vaccine distribution, for example, is a collective action problem that can only be managed by the government (a problem that the federal Liberals also seem to be struggling to solve.) We desperately need competence in managing that process, and we cannot tolerate a political belief system that is so deeply hostile to the basic functions of government when we face so much danger and loss.

What is the plan to have us all vaccinated? Why did we wait so long to lock Ontario down when all of the data pointed to the spikes in cases we now face? What is the plan for fully and assuredly returning our children to schools safely? Answering these questions requires effective governance. It’s not enough to tout personal responsibility and freedom because those values are not sufficient for solving collective action problems.

If conservatives cannot effectively govern by managing and responding to crises such as the one we face, then we will all suffer. None of us will be safe until all of us are safe from this disease; that’s what makes it a public-health crisis. Unfortunately, Ontario could not have picked a government more ill-equipped to address such a problem. In the end, the pandemic may infect our body politic and rid us of the idea that a commitment to freedom and personal responsibility is enough of a justification to support a political party.

Conservative politicians need to wake up. If they don’t, one of the many casualties of this pandemic may end up being the belief system that has underpinned their commitments for the last 50 years. 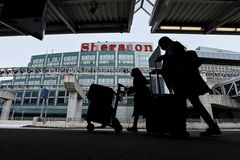