How much has the landscape changed in the course of a fortnight? If an election were held tomorrow, it’s a good bet that Joe Biden would win it handily.

It’s a good bet that Americans would move to embrace ordinary Joe out of a desire for stability, traditional ways and competence.

It’s a good bet that the Democrats would realize their wish to have the plunderer of the old order, Donald Trump, vanquished, relegated to the ash heap of history.

In many ways, this outlier President has brought on the upheaval he promised in 2016, gutting the old system. But what is finally being demonstrated with the novel coronavirus calamity is that Mr. Trump has left nothing in its place – that the residue of his vanity-driven recklessness is malfunction. With his disastrous televised address to the nation on the virus as exhibit A, what is being demonstrated is that the emperor has no clothes.

Mr. Biden, who appears set to become the Democratic nominee, is the man of the hour. The country may be his for the taking, even though he has done precious little to merit this suddenly exalted stature. He ran a stumblingly weak campaign in which he was trounced in the first three primaries he entered, about to be ingloriously cast to the sidelines only to be rescued by a rush among the Democrats to save the country from another disrupter, this one from the left, in Bernie Sanders. The rapid-fire consolidation of the moderate-party candidates, representing principally the Democratic establishment, saved Mr. Biden.

At the same time, cases of the lethal coronavirus emerged in the U.S., necessitating leadership that offered experience, trust and stability. These are strengths of Mr. Biden.

The election isn’t tomorrow, of course. Who knows what the coming months will bring, or if the lifelong pattern of Mr. Trump resurrecting himself from deep troubles will continue. But on Friday afternoon, he officially declared a national emergency in response to the coronavirus. Times of national crises are often moments when there is a rally-around-the-flag effect, and a president’s numbers jump. We’ll see.

Still, so long as the economy was roaring and his propaganda machine could prop him up and drown out rational minds, Mr. Trump had been able to get away with his excesses. So long as the financial and physical well-being of the citizenry wasn’t threatened, he could revel in his pomposities.

But the combination of a public-health calamity and an economic crash exposes him like never before. Presented with the greatest crisis of his presidency, Mr. Trump came before the cameras Wednesday night to deliver the most important speech of his presidency, to reassure the nation and set out a course correction.

He failed on most every count. He laboured through it. He got facts wrong. He announced a travel ban from Europe (excepting the United Kingdom) without even having forewarned European nations. He said next to nothing about expanded health-care coverage and virus testing. He offered no new specifics on how to prevent the spread of the disease in his country. He blamed others.

The market responded with a further meltdown. Travellers overseas were panicked. Instead of being assuaged, the country was plunged into further angst. Critics piled on, saying that in a defining moment of his presidency, Mr. Trump crashed like the market he had long held up as the symbol of his greatness.

It is at times like these that the country needs a well-functioning government of stable professionals. Mr. Trump spent much of his first term attacking government and agencies, and eliminating from his revolving-door White House all but the most toadying loyalists.

His administration spent much of the past two years dismantling government units designed to protect against pandemics. The Centers for Disease Control and Prevention had to cut its programs to prevent global disease outbreak by 80 per cent as its funding began to run out.

Just a while ago, the debate in the country centred around Mr. Trump’s rollicking successful capitalism versus the destabilizing democratic socialism of Mr. Sanders, who appeared set to claim the Democratic nomination.

The script has flipped. It’s now Mr. Trump in the throes of a public-health catastrophe coupled with a tumbling economy versus the prospect of the traditional moderate liberalism of Joe Biden, who has spent a half century working in that realm, capped by his eight years as vice-president to Barack Obama, who presided over an economic recovery with a good degree of grace, competence and professionalism.

“Unfortunately, this virus laid bare the severe shortcomings of the current administration,” Mr. Biden said Thursday. “Public fears are being compounded by the pervasive lack of trust in this president.”

Trust is the key word. Donald Trump is losing it, leaving a void that Joe Biden appears equipped to fill. 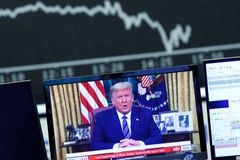 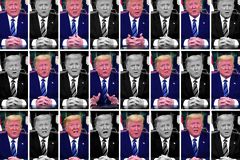 Opinion
During this time of pandemic, we must also fight the ‘infodemic’
March 12, 2020 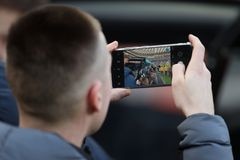