Jeff Booth is the author of The Price of Tomorrow: Why Deflation Is The Key To An Abundant Future.

The economic system we have relied on is breaking down.

Amplified by COVID-19, society is on a collision course that most are not even aware of, caused by two competing forces moving in opposing directions: the exponentially deflationary aspect of technology and an inflationary monetary policy trying to overcome it.

Today, through a simple cellphone and set of interfaces, people have more power at their fingertips than leaders of most countries had only 30 years ago. Technology has changed our lives so much that we take it for granted; we get frustrated when, say, our WiFi won’t transfer in two seconds what would have taken us 20 minutes in the year 2000. Today’s fourth-generation wireless is, on average, 100 times as fast as a dial-up modem two decades ago – and 5G will soon make that feel slow.

Technological advances have swept across society and they have been hugely beneficial. Your smartphone provides a compelling example. Invented only 13 years ago, it is no longer just a phone: It is your camera, assistant, map, music device, guitar tuner and hundreds of other applications that you no longer pay for. When we use technology, we gain efficiency, and with more abundance should come less cost.

That efficiency will reshape our future, across every industry, from automotive, to agriculture, to energy and to health care. In doing so, technology will deliver better outcomes at a lower price.

If technology makes everything cheaper and more abundant, and it’s moving into every industry, it is logical to assume that prices should go down and society should enjoy increasing benefits everywhere. If our economic systems were designed that way, we might be able to enjoy a similar lifestyle to the one we have now while only working 15 hours a week, as John Maynard Keynes famously predicted in his 1930 essay The Economic Possibilities for Our Grandchildren.

That logic, though, defies current economic theory, which has us on a growth and inflation trajectory that must never end, at all costs. The facts of a new reality – that prices should follow a downward trajectory gained from the efficiency of technology – means that today’s policy is at odds with technology’s growing influence over our economies.

Instead, central banks and governments continually bail out the existing system – not driven by desire, but out of fear that letting the system fail and go through a disorderly unwind is a worse alternative in a set of bad choices. Society is thus forced to run on a treadmill, working more to support ever-higher prices, which have themselves been inflated through monetary easing, artificially low interest rates and bailouts. Enriching some while impoverishing many others.

A financial system based on credit is just an exchange of money today for money later. If I give you dollars today, I temporarily lose the utility of my money in exchange for having more later; you would get the inverse, which is the benefit of more money today and less tomorrow as you pay back the loan with interest. This system works on trust: that you will pay what you said you would pay. While you may look wealthy for a time by spending more of tomorrow’s dollars today, eventually that bill comes due – which means that in the future, you must spend less as you pay back the loan with interest. This is always the case, whether that trust is in a person, company, or government. Remove trust and it affects the creditworthiness of an individual or company, and they can be forced into bankruptcy. Remove trust from a system, and it can unravel very quickly.

All of this was the case even before our current crisis, which has seen an explosive rise in debt while the economy shrinks even more. In itself, that debt burden must slow growth in the future because taxes will need to go up on the range of industries and households that will have to pay for it.

In their desperate effort to achieve growth and inflation, central banks and governments – through artificially low interest rates and monetary policy – have only created more pain. Incentives designed to make cash less valuable and encourage more spending reduce savings and encourage individuals and companies to take on additional debt.

For the wealthy and those with assets that were artificially boosted by years of this kind of leverage, that has played out well. Assets, including real estate and stocks, were the beneficiaries, and before the pandemic, they had run up in value far beyond what they would have been without the easing. But for every person on the winning side of those decisions, there are many others on the losing side. Their costs of food, shelter, gas and health care are rising because of policies designed to make their cash and wages less valuable. Assets that they don’t yet own are running away in price and they are feeling the squeeze of a system that no longer works. It is no wonder that societies all over the world face a rise of anxiety, anger and populism.

Technological deflation was affecting economies long before COVID-19. That is, without intervention in free markets and the creation of policies to stop prices from falling, the prices of everything would already be much lower. Savings would be much higher, too – which ironically would have created a greater safety net for society in times such as these.

Paradoxically, this pandemic has actually sped up the adoption of technology and driven the trend to lower prices faster. Technology companies have been the beneficiaries. Zoom, for instance, has seen significant growth in the number of people that participate in meetings that use its online conferencing services, with many using the technology to help run their businesses; the longer this crisis proceeds, the less appealing their commercial real estate might look. If that happens, real estate prices would fall – as would rents. Meanwhile, bricks-and-mortar retail, already under enormous pressure before COVID-19, will likely face even more as the trend to e-commerce is amplified.

I grew up in a world where I believed anything was possible with hard work and creativity. I still believe that. I also believe in capitalism, where the free market is the ultimate referee of your value. That’s why it pains me so much to see that worldview breaking down.

Although no system is perfect, the rules by which capitalism operated were well-regarded and understood. You could expect that if you made a big bet and were wrong, you would be wiped out – but if you were right, your effort, ingenuity, or risk-taking would be rewarded. This system dominated over the better part of the 20th century.

But then the rise of fiat currencies that could be manipulated domestically and the bailouts in 2008 changed the rules so that players whose bad bets caused the crisis were rewarded handsomely instead of being wiped out. Capitalism was essentially replaced with today’s version: An economic system that requires ever higher bailouts, negative interest rates and monetary easing to function, which arbitrarily transfers massive amounts of wealth to the wealthy and further escalates the problem.

So, we stand at a crossroads similar to the one we had in 2008 – only bigger, with calls for massive bailouts of taxpayer money to save the same system that was so clearly failing in the first place.

We need a new set of rules.

Policy response is required and justified. People are hurting. As before, there are no easy answers because the magnitude of what we are dealing with is far bigger than most realize. The transition away from the old rules will be painful. But beyond that, it’s hard to imagine why more abundance and less cost would be such a bad thing for society. It’s going to happen anyways, in the end.

By understanding the key structural change that technology has enabled, governments can step in and provide a transition to a brighter future. Not doing so is analogous to Kodak trying to retain their film business while competing against digital cameras, or Blockbuster adding candy aisles to their stores to counter Netflix: Massive amounts of money will be wasted and the efforts are doomed to fail regardless. If that happens, more people will be hurt in the end.

As goes the quote variously ascribed to many, “Never let a crisis go to waste.” So let’s use this as an opportunity to make the system – and the world we live in – much better.

Opinion
Coronavirus has shown us we were living in an economic fairy tale
March 28, 2020 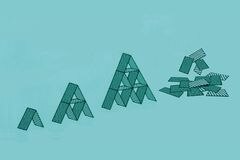