That was quite a turnaround. Was it only last month that the Liberal government was issuing memos telling its employees not to alert investigators in cases of suspected abuse of the Canada Emergency Response Benefit (CERB), but simply to cut the cheques as usual?

Given the needs imposed by the coronavirus lockdown, the Prime Minister said then, the priority had to be getting the money out the door: It was not worth holding up payments to millions of law-abiding applicants just to weed out a small number of fraudulent claims.

Besides, the government had a robust system of checks and safeguards in place, Employment and Social Development Minister Carla Qualtrough insisted: Any overpayments could simply be recouped afterward. She did not foresee the need for any further penalties.

Well, here we are scant weeks later, and the government has drafted legislation prescribing fines and even prison sentences for people who make fraudulent claims under the program. Bill C-17 lists several possible offences, The Globe and Mail has reported, including “making false or misleading statements, failing to fully disclose all relevant income or receiving an income support payment for which a person is not eligible.”

The bill also sets new conditions on the benefit. Originally, applicants were required to have lost work because of the pandemic, to have earned at least $5,000 in the past 12 months, and to be earning no more than $1,000 a month during the benefit period. Now they will also have to return to work “when it is reasonable to do so” or accept “a reasonable job offer when they are able to work.”

Why all the changes? Possibly because the number of fraudsters has not been as small as all that. Whistle-blowers within Ms. Qualtrough’s department have told reporters of discovering all manner of dodges and fiddles, which they were obliged to wave through: people applying for CERB payments while also receiving Employment Insurance or other benefits; people falsely claiming enough earnings to qualify for the program; people claiming the benefit while getting paid by their employers on the sly; people claiming the benefit after quitting their jobs, or even while travelling abroad on leave.

All told the cost of the program was initially estimated at $35-billion; it is already at $43.5-billion, on its way to (at latest estimate) $60-billion. More than 8.4 million people have applied for benefits. Even if the number of fraud cases is limited to the 200,000 the department has found to have been double-dipping – roughly 2.4 per cent of all applicants – that is still nearly three times the usual fraud rate for federal programs. But the likelihood is it is much higher than that. To compound matters, the other major federal pandemic support program, the Canada Emergency Wage Subsidy (CEWS) has proven something of a flop. Just under 200,000 companies have applied for and been approved under the program. With about two million employees enrolled, the program currently pays to keep fewer than a quarter as many people in work as the CERB pays to stay home.

Well, fine: law of unintended consequences, people respond to incentives, etc., etc. The question is what to do about it. Having left the banquet table unattended on its first attempt, the government appears to be overreacting in the other direction this time. Out-and-out fraud is one thing. But if people are disinclined to get off CERB and take paid employment, the answer may not be draconian edicts that they must. Rather, it is to stop forcing them to choose between them, or not on such stark terms.

The flat $1,000 limit on earned income was always an absurdity: Earn one dollar over the limit and you lose, not only a dollar in CERB – effectively, a 100-per-cent tax rate – but the whole $2,000. Yet, instead of doing as economists have recommended, and allowing workers to earn more income on the side while taking it out of their CERB at a rate of, say, 50 cents on the dollar, the proposed amendments leave the cap in place: $1,000 for each four weeks of benefits, as before, or $500 for the new two-week benefit period.

God knows the costs of the program need to be reined in. And certainly a gentler clawback would take things in the other direction. Fine – cut the basic benefit, then. At $500 a week, many former employees have been earning more on CERB than they did on the job. But if the point is to nudge workers back into the labour force, it makes no sense to hit them over the head for doing so, through the total loss of benefit.

That’s the real disincentive, remember: not from giving people money when they don’t work, but taking it away from them when they do.

Editor’s note: (June 12, 2020): An earlier version of this article incorrectly said CERB benefits were being extended. 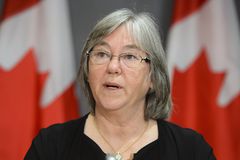