Is our democracy functioning? Are Canadians optimistic for the future? What’s the definition of “middle class” in 2020? How will the concept of work change in the age of artificial intelligence? Data Dive with Nik Nanos, a new series, will explore the hopes and fears of Canadians.

Mr. Nanos is the chief data scientist at Nanos Research and the official pollster for The Globe and Mail. He is a Global Fellow at the Woodrow Wilson International Center for Scholars.

Among the more striking phenomena I’ve lately noticed, in my work as a pollster, is something I call joyless prosperity. Canada’s unemployment rate sits at historic lows and the macroeconomic data suggest stability, but by a margin of more than three to one, Canadians are likely to believe that future generations will have a lower standard of living. This points to the fundamental disconnect between the economic numbers hurled at Canadians and the anxiety we feel about the future.

Like a disease, it has infected civic society, too.

One can argue that the result of the 2019 election was one of “joyless democracy,” with a fundamental disconnect between democratic sentiment and parliamentary outcome.

Former British prime minister Harold MacMillan, when once asked what he most feared, famously responded “Events, dear boy, events.” This quote came to mind several times during last fall’s federal election, which, typical of many campaigns, was full of “gotcha” moments.

On the first day of the campaign, a Globe and Mail news story about RCMP inquiries put Liberal Leader Justin Trudeau on the defensive, resuscitating the SNC-Lavalin affair and the resignations of former ministers Jody Wilson-Raybould and Jane Philpott. More revelations soon followed, including Mr. Trudeau’s past brownface and blackface episodes, as well as Conservative Leader Andrew Scheer’s dual citizenship and disputed professional credentials.

Because of this, it was truly anyone’s election to win – though perhaps “none of the above” would have been a popular choice among voters.

I recently looked back at The Globe and Mail/CTV News/Nanos polls from the campaign, which tracked the race over the course of 37 different nights: the Conservatives led on 22 occasions, while the Liberals were ahead 15 times. In the end, Mr. Trudeau’s Liberals captured a minority of seats in Parliament (157) to Mr. Scheer’s Conservatives (121), although the Tories won a larger share of the popular vote (34.4 per cent) than the Grits (33.1 per cent).

These results suggest a number of key takeaways.

First, we should not confuse parliamentary outcomes with popular support.

Mathematically, our first-past-the-post system regularly results in a plurality (meaning the winning party receives less than 50 per cent of votes) that still leads to a majority of seats. In 2011, for example, Stephen Harper’s Conservatives won a majority (166 seats) with 39.6 per cent popular support. In 2015, the Trudeau Liberals won a majority (184 seats) with 39.5 per cent popular support. What should be remembered is that in most cases in which one party wins a majority of the seats, usually a majority of Canadians vote against the winner. When both Mr. Harper and Mr. Trudeau won, a majority of Canadians were probably disappointed with the outcome and did not support the new government.

In the 2019 election, almost seven out of 10 Canadians were likely yelling at their television set on election night – either because of the Liberal win or because of the disappointment with the performance of the Scheer-led Conservatives.

And so we have “joyless democracy” – a government is formed, but most Canadians are unhappy with the outcome. 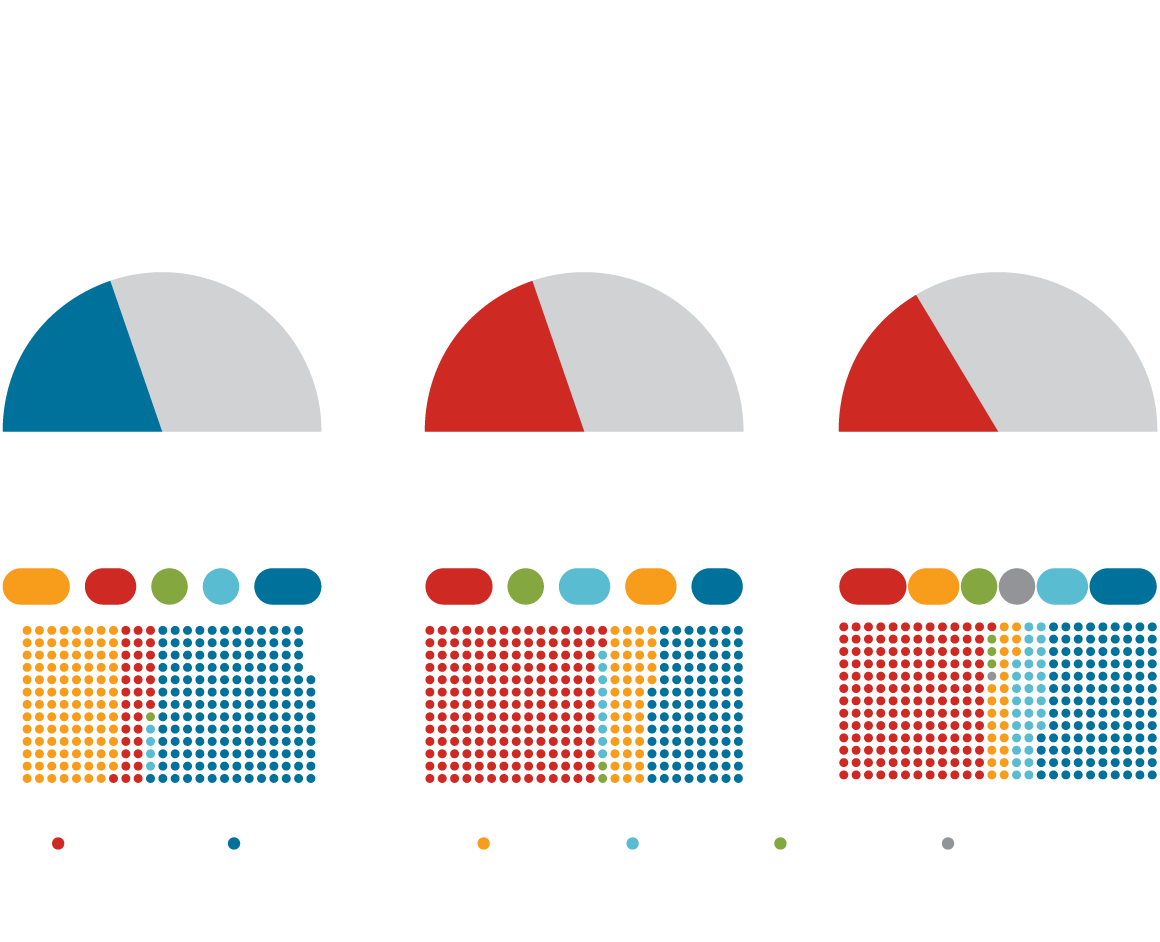 Digging deeper into the results suggests that the Liberals were within a whisker of forming a majority government. A very small swing in votes in the right place could have led to a different outcome.

More than 17 million votes were cast in last year’s federal election. Consider this: If about 21,000 votes had swung to the Liberals in only 13 ridings, Mr. Trudeau would have won his second consecutive majority having still lost the popular vote. Conversely, the Scheer Conservatives would have needed to win about 149,000 votes in 49 ridings to win a Conservative majority. This election was effectively won by the uber-efficient Liberal campaign team. The Conservatives had massive wins in the Prairies among disaffected Canadians, while the Liberals won a swath of targeted close races across the country.

The fact that the greatest concentration of dissatisfaction with the outcome was concentrated in one region should not paper over divisions within Canada. A vote is a vote is a vote. For a first-past-the-post democracy, there is a spectrum of outcomes. At one end is a majority of citizens voting for a party and for the party to have a majority of seats. At the other end of the spectrum is a party losing the popular vote and winning a majority of the seats. Election results on a riding-by-riding basis show that Canada was very close to witnessing a complete disconnection between the preferences of individual Canadians and democratic outcomes, with the Liberals losing the popular vote but almost winning a majority of the seats. This has happened in the past. In 1926, Liberal Mackenzie King lost the popular vote but won a greater number of seats than Conservative Arthur Meighen. Likewise, in 1957 Progressive Conservative John Diefenbaker lost the popular vote to Liberal Louis St. Laurent, but Mr. Diefenbaker won more seats and formed a minority government.

This problem – let’s call it the tyranny of small numbers – is not unique to Canada.

In the 2016 U.S. presidential election, a swing of about 80,000 votes (out of 150,000,000) from Donald Trump to Hillary Clinton in the key states of Michigan, Wisconsin and Pennsylvania would have resulted in Ms. Clinton winning the electoral college. A swing of one out of 50 votes would have kept Britain in the European Union and scuttled the Brexit movement. In that sense, Mr. Trudeau’s victory has much in common with the Trump and Brexit wins.

Might electoral reform be a salve against these joyless democratic outcomes? These hypothetical scenarios fall into the purview of fantasy politics – the proverbial what ifs.

What about a preferential ballot? Nanos regularly tracks second choices of Canadians. Using the research data collected at the end of the campaign, a preferential ballot system would have resulted in generally the same results as the first-past-the-post scenario. In this alternative, the Conservatives win six fewer seats and the New Democrats win six more seats. Playing out different possible scenarios in the 2019 election, a proportional system significantly benefits the New Democrats to the detriment of the Liberals, while a first-past-the-post or preferential ballot favours the Liberals. Conservative outcomes are generally consistent, within a range, under all three seat-allocation methods.

So what have we learned from this dive into the 2019 election data?

Governments would be best served by never forgetting that, even if they form a government, in most instances, a majority of people voted against them. Most elections are not a warm embrace of the winner and their policies but simply a decision on what is perceived as the best comparative choice of the time. Mr. Harper and Mr. Trudeau did not run against perfection, but against opponents who were seen as being more imperfect.

This should not diminish the ability of any government to do good work and make Canada a better country, but, now more than ever, governing should be done with a sensitivity to the real political environment.

Likewise, all democratic systems are imperfect. Here we have put a spotlight on the imperfections of the first-past-the-post parliamentary system, but we should not diminish the ability of that very same imperfect system to create democratic stability.

Winning both a majority of votes and a majority of seats is a high benchmark for any politician to achieve. The past 50 years of federal elections in Canada have produced this double majority on only one occasion – under Progressive Conservative Leader Brian Mulroney in 1984. Also, minority governments have been and can be productive. One should not confuse the disappointment of a majority of Canadians after a particular campaign outcome with Canada’s democracy being dysfunctional.

Perhaps one solution for joyless democracy would be for politicians to nail on their wall how many Canadians voted for them and voted for others in the hopes that they be grounded. A healthy democracy needs dialogue with opponents and respect for a diversity of views and compromise. Those are the very traits upon which Canada was founded.

opinion
As gerontocracy looms, American democracy may be running out of time
March 4, 2020
With François Legault in charge, democracy is getting schooled in Quebec
February 13, 2020
Egypt frees pro-democracy activist imprisoned for more than four years
February 7, 2020