After the U.S. presidential debate, which seemed to have been directed by Wes Craven from beyond the grave, Google searches for “move to Canada” reportedly soared. You can hardly blame our American friends, who have belatedly realized the threat is coming from inside the White House.

The question is, what do they expect to find here? A wintry utopia? A land where people gather nightly around the national bonfire drinking rye and ginger and singing Hallelujah? Man, are they ever going to be surprised.

They would be escaping a country torn apart by a historical failure to address systemic racism in its institutions – in criminal justice, health, education, banking and politics, to name a few. But they would be fleeing not to a colour-blind paradise, but to a country that has also failed to deal with its own systemic racism.

We are a country that does not, in fact, like to say the words “systemic racism” in either of the two official languages. Just ask Quebec Premier François Legault, or RCMP Commissioner Brenda Lucki, who have both denied institutionalized discrimination in their backyards, despite all evidence to the contrary.

Americans will perhaps be aware of the horrifying case of Joyce Echaquan, who recorded a video of the staff at a Joliette, Que., hospital racially abusing her before she died. Tied to a bed and crying for help, the Atikamekw woman was not calmed or listened to, nor treated with any kind of human decency, but instead was forced to hear the hospital workers say, “You made some bad choices, my dear,” and, “She’s good at screwing, more than anything else.”

This scene caused outrage across the country, as it should, but anyone who is surprised should check their eyes and ears. The hospital had been subject to complaints of racist treatment before Ms. Echaquan’s death, troubling incidents that were noted in the 2019 Viens commission report that examined discrimination by public services against Indigenous people in Quebec. Commissioner Jacques Viens found there was systemic discrimination in the province, and said he understood why Indigenous people would feel “a certain mistrust of public services.” Most of the report’s 142 recommendations have not been implemented.

Someone should remind Mr. Legault of those findings, considering that he continues to insist there is no systemic racism in his province. “I really don’t think we have this kind of way of dealing with First Nations people in our hospitals in Quebec,” he said after the story of Ms. Echaquan’s mistreatment broke. (He must have a Magic 8 Ball foretelling the conclusions of a task force that was struck this summer to combat racism in the province.)

Americans who flee to our fairer shores will find a country ankle-deep in reports about biased treatment toward racialized communities and First Nations. They might know about the gruesome reports that migrant women detained in ICE custody in their country were subject to forced sterilizations, but do they know that the same thing has been happening to Indigenous women in Canada for decades? Or that this barbaric practice has been condemned by international human-rights groups, the United Nations and women’s groups in Canada? It is the subject of a proposed class-action suit. The House of Commons health committee said forced sterilizations happen “to this day” – and this day was not 20 or 30 years ago. It was August, 2019.

So many reports. So many inquiries, commissions, recommendations, mandates, lawyers, grief-stricken witnesses forced to lay their trauma out publicly, so it can be placed between nice leather covers and stuck on a shelf. And yet, so few people willing to admit the unavoidable conclusion: We live in a society in which institutional racism damages the lives of some people and – crucially – enriches others.

Our American friends like to take to the streets after yet another instance of brutality is brought to the public eye, usually through a camera’s eye. This summer’s protests across the United States were fuelled by grief over the police slayings of Breonna Taylor and George Floyd. In Canada, too, there have been demonstrations over a series of brutal anti-Black and anti-Indigenous interactions with police. Those vigils and marches tend to be quieter than their American counterparts. This weekend will see another, the Sisters in Spirit vigils across the country to protest violence against Indigenous women and girls.

Did I mention the federal government has not yet presented its response to the landmark Missing and Murdered Indigenous Women and Girls report of a year ago, the one that documented a continuing genocide against Indigenous women and girls? There are just so many inquiries out there at the moment: Nova Scotia is studying the role of racism in its criminal justice system (at least Premier Stephen McNeil acknowledged, and apologized for, the harms of systemic racism); British Columbia is investigating the treatment of Indigenous people in emergency rooms, centring on allegations that hospital staff would play a game guessing their blood-alcohol levels; and of course there’s the commission studying the issue of institutional racism in Quebec, which its Premier says doesn’t exist.

Whose response to injustice is better? The Americans get cities filled with tear gas. We collate a lot of pages. At least they get some exercise. There’s no indication that things will improve in the short term: They’ll continue to pour out into the streets, and we’ll continue to make recommendations with subsections. Maybe we can learn from each other. In the meantime, we should probably each stay in our own houses, and work on putting them in order. 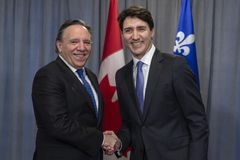 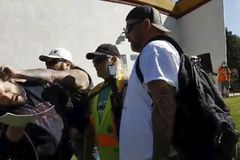 Opinion
Can Canada pivot from pandemic to progress?
September 19, 2020 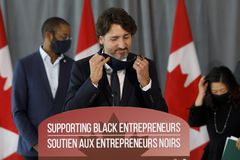