There are moments during Denys Arcand’s The Fall of the American Empire when the Oscar-winning director’s latest film may feel like it was made for a Quebec audience only, fraught as it is with the mafia hits and corruption scandals that any reader of a certain Montreal tabloid might recognize as inspired by local real-life events.

But the brilliance of Mr. Arcand’s best films, of which this is one, is in their ability to transpose universal themes onto a local canvas in a manner that makes audiences everywhere instantly identify with his satirizing of contemporary Québécois mores as only someone with his intelligence, wit and insight into this distinct society could.

Indeed, few other directors could be pretentious enough to call a French-language film that takes place entirely outside the United States The Fall of the American Empire and get away with it.

Mr. Arcand gets away with it because his movie, which opened last week in Quebec and will be released across North America this fall, is a reminder to Quebeckers and non-Quebeckers that, regardless of where we live, society is going to hell in a handbasket.

While the exact circumstances of societal breakdown might differ somewhat according to location, at the core of what’s killing our communities, in Mr. Arcand’s telling, is the cult of the individual and the death of collective values. We live for nothing and no one but ourselves and the fleeting pleasures and possessions we spend our time pursuing.

International audiences first became acquainted with Mr. Arcand’s scathing satire in 1986’s The Decline of the American Empire. The title of Mr. Arcand’s newest film suggests that it is a follow-up to that Oscar-nominated movie, and it is, in part. But it is not a sequel. The Barbarian Invasions, named best foreign-language film at the 2004 Academy Awards, filled that role. In Barbarbians, the characters of the Decline were reunited two decades later as one of them prepared to end his life with the help of others rather than endure the assembly-line care offered by Quebec’s public health-care system.

That film struck a nerve in the collective psyche and foreshadowed real-life events. Quebec became the first province to legalize medical aid in dying, which the Supreme Court of Canada declared a constitutional right in 2015.

Whereas Decline centred on the sexual hedonism of post-1980 referendum Quebec, greed and anti-intellectualism in 21st-century Quebec society are the focus in The Fall of the American Empire. And while his earlier film was mostly about the mess baby boomers had made of their society and their own lives, Mr. Arcand’s new movie speaks to a new generation of Quebeckers of the wreckage for which they also bear some responsibility. Luckily, he offers us a hero, although probably not one that anybody would want their kids to emulate.

Pierre-Paul, the film’s central character, is a thirtysomething philosophy PhD who works as a parcel deliveryman (because the pay’s better), recites Aristotle and Marcus Aurelius by heart, is incapable of passing panhandlers without emptying his pockets and decries the burden of being “too intelligent” to succeed in the modern world. When he happens upon a huge sum of stolen cash, he faces the ethical dilemma of what to do with it. Turn it over to corrupt police who take their cut, or enlist hardened criminals to help him put the cash to better use?

What follows is part side-splitting morality tale, part tightly wound heist movie, all wrapped up in a love story that exposes Mr. Arcand’s unique talent for marrying high-brow and low-brow Quebec culture. Whether Mr. Arcand intended it or not, The Fall of the American Empire is a gut-check movie for contemporary Quebec. When stories about corrupt public officials, crooked lawyers, gang warfare and mafia bosses being gunned down are daily fodder in the tabloid Le Journal de Montréal, nothing about Mr. Arcand’s film feels exaggerated. Certainly not the elite lawyer who launders clients’ money through offshore tax havens and who, by his own telling, is untouchable because two former prime ministers are partners at his firm. Certainly not the way in which white-collar criminals get off so easily while the lives and reputations of those accused of sexual misconduct are ruined in an instant in our #MeToo world.

If this is not the 77-year-old Mr. Arcand’s best film – Quebec critics are divided on that one, although I happen to think it is – it is his most boisterously urgent one. Please, see it.

Michael Jones was a pioneer of Newfoundland filmmaking
April 6, 2018 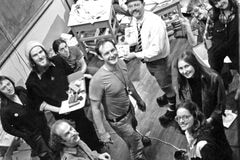