Once Jason Kenney kicked Derek Fildebrandt out of Alberta’s United Conservative Party, you knew there’d be a counter-move. Perhaps no one expected this one, however.

Mr. Fildebrandt has announced the formation of a new right-wing political association in the province – the Freedom Conservative Party. And if that sounds a little Ayn Rand-meets-American Tea Party, that’s precisely the point. Mr. Fildebrandt is a conservative renegade, and if he was going to seek revenge on Mr. Kenney by starting another party, you knew it would be one in his own, unapologetically libertarian image.

The leader of Alberta’s newest conservative-conservative party is a political narcissist. No one loves the sound of his own voice more than he does. And few think more highly of themselves, either. Mr. Kenney is lucky to be done with him, regardless of whatever popularity the maverick politician might possess in certain right-neck corners of the province. Undoubtedly, it wouldn’t have been long before Mr. Kenney was looking over his shoulder the way Wildrose leader Brian Jean was forced to when Mr. Fildebrandt was a member of his caucus.

The man has never been good at hiding his ambitions.

The question now is, what does this mean for Alberta’s political landscape? Does it alter the calculus of the next provincial election? Will it affect the policy platform of the United Conservative Party (UCP) heading into that campaign?

I don’t think there’s any question that the move will have gained Mr. Kenney’s attention. Mr. Fildebrandt says he will only be running candidates in ridings in which the NDP have no chance of winning. Isn’t that nice of him? The fact is, the popularity of a party based on so-called freedom principles is likely to be limited to rural parts of the province where there are few fans of the NDP in any event.

But there is certainly a chance that Mr. Fildebrandt could make the case that putting a few Freedom Conservatives in the legislature to keep Mr. Kenney’s anticipated UCP government honest might not be a bad idea. So the political geography of the province could be affected by the Freedom’s presence. The more interesting question is whether the upstart party will have any discernable effect on UCP policies. Will the UCP become a little more socially conservative to take space from the Freedom party?

Rachel Notley and the NDP hope so.

While Mr. Fildebrandt’s announcement is good news for the NDP and bad news for Mr. Kenney, it’s a move that was in some ways inevitable. There were bound to be former Wildrosers who were left feeling abandoned, ideologically, by the merger with the Progressive Conservatives that gave birth to the UCP. Disaffected Tories had the Alberta and Liberal parties to retreat to. Unhappy Wildrosers had nowhere to turn.

But don’t mistake this for anything but what it truly is: Mr. Fildebrandt’s payback. He felt humiliated and publicly embarrassed when Mr. Kenney told him to take a hike. Mr. Fildebrandt had become a political liability after a series of missteps that included renting out his taxpayer-subsidized Edmonton condo on Airbnb, double-dipping on his meal expenses and being convicted of leaving the scene of an accident. Mr. Kenney also pointed to outstanding legal issues, including a poaching charge of which he was found guilty. Mr. Kenney eventually said enough is enough. Now, we’re seeing how Mr. Fildebrandt has decided to respond.

He’s going after Mr. Kenney for forming what he contends is a party that is just another version of the old Tories. He’s called the UCP “vanilla” conservatives whose idea of sticking up for the province is just “barking a little louder” at Ottawa.

Meantime, Mr. Fildebrandt’s idea of reform is repealing what he considers to be the worst extremes of the “nanny state” he contends Alberta has become under the NDP. He told the Calgary Sun he rejects any type of race or gender quotas and would repeal an NDP edict that would form no-protest bubble zones around abortion clinics. In other words, he’d create an Alberta we haven’t seen in a while and many inside the province had said good riddance to.

We shall see what kind of reception Mr. Fildebrandt’s gambit receives from the public. But for now, it allows him to share in the spotlight that has been trained on others for the last while. And that was likely the whole point. 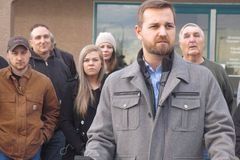