Debra Soh is a sex neuroscientist, the author of The End of Gender, and the host of The Dr. Debra Soh Podcast.

Say what you want about social justice advocates – they’ve been clever to seize upon education as a way to bring their vision of utopia to the fore. Anyone who remains skeptical can look at a current job posting at Dalhousie University. It seeks an assistant professor in agronomy, and explicitly excludes non-minority, white men from applying.

The posting cites “employment equity” as its reason for being “restricted to candidates who self-identify” as a woman, a visible racial minority, someone with a minority sexual orientation or gender identity, or a disability.

This criterion mirrors a wider trend across academic institutions today, eager to incorporate the diversity, equity and inclusion (DEI) mission. For example, it has become commonplace for academics applying to faculty positions to include a statement detailing how they will achieve DEI in their teaching and research. This simultaneously serves as an effective way to filter out applicants who disagree with this mandate.

Individuals will also be encouraged to fill out a checklist (I kid you not) of all the different minority groups to which they belong, even though this information has zero relevance to their capabilities as an academic.

Though possibly well-intentioned, the way to account for discrimination of the past is not to actively enforce discrimination now. Doing so will provoke a backlash against women and minority groups, and a hiring process that downplays merit will raise the unfortunate question in colleagues’ – and students’ – minds of whether a new hire deserves to be there.

At best, these policies evoke pity; at worst, they fuel resentment. Research has shown that pro-diversity messages can lead dominant groups to feel threatened, so one can only imagine what outright discrimination will achieve.

It is also profoundly patronizing to assume that anyone who is not a white man requires help to qualify for a job. In an environment as gruelling as academia, which typically consists of 80-hour work weeks and sacrificing major life milestones in the name of productivity, treating professional accomplishments as secondary to the number of identity labels one possesses is unjust.

There won’t unfortunately be an end to this anytime soon. In the United States, Critical race theory, the unfettered cultist thinking that attributes all discrepancies in society to racism and power imbalances, is being incorporated into schoolchildren’s education, securing yet another generation to further activists’ goals. Gender ideology, which believes anything less than gender parity – particularly in male-dominated STEM disciplines – is an indication of rampant misogyny, has similarly become ubiquitous in Western curriculum.

Instead of seeking evidence-based explanations for group differences, activists have dedicated themselves to shutting the whole thing down. Movements like last summer’s #ShutDownSTEM accused scientists of not doing enough to eradicate anti-Black racism, and demanded they stay out of laboratories and classrooms, and scientific journals cease production, for a day of racial reckoning.

It remains unclear, however, how halting scientific progress helps to end racism in any capacity. That’s because this activism cares less about rectifying injustice, and more about destroying anything that stands in its way.

I have had white male colleagues tell me that when applying for jobs, they’ve seriously considered identifying as something other than what they are, so that their application won’t be dismissed at first glance. This highlights the absurdity of the DEI paradigm, in which so-called oppressors must select a marginalized status in order to avoid being penalized.

Is this the world in which we want to live? I implore those who remain silent because the DEI mentality benefits them to consider how they would feel if it was the other way around, and they were being denied opportunities due to traits not of their choosing.

The towers of learning should be focused on recruiting the brightest and most innovative minds to propel society forward, instead of prostrating themselves for the sake of optics and taking pride in pandering to the identity politics game.

Opinion
Feminism in the bedroom can leave women unfulfilled
September 4, 2020

Opinion
Blaming sexism for Elizabeth Warren’s loss is a disservice to women
March 8, 2020 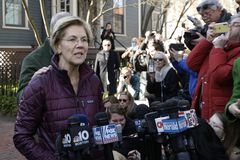