Bryan Borzykowski is a Winnipeg-based writer.

Every so often, my wife and three kids would ask me about getting another dog. We already have one, an 11-year-old bichon poodle named Banjo, who, as cute as she is, likes to wake me up at 4 a.m., find creative ways to knock dinner off the table and bolt through the door to find the nearest garbage. The answer to their question had always been the same: You can have me or a new dog, but not both. Thankfully, they’ve always chosen me.

Then everything changed. COVID-19 sucked the life out of our usually happy family. My kids – 12, 8 and 4 – were suddenly separated from their friends; my wife, a kindergarten teacher, had no idea how she was going to teach small kids from home; and I was scrambling to make sure I had enough work coming in. Like everyone else, we had to sort out this new life, when all we really wanted to do was crawl under the covers and sleep the next three months away.

At some point last week, my wife asked me to go look at rabbits, which was never part of the second animal discussion, but I went. My oldest daughter, an animal liker, but not an animal lover, came with us and, immediately, her face lit up in a way it hadn’t in weeks – and especially since she became confined to our home. I said no to the rabbit, but I suggested something else: How about a dog?

I was as surprised by that idea as the rest of my family was, but, it turns out, the past two weeks have been great for pets. Between March 12 and 25, 109 cats and dogs have been adopted from the Winnipeg Humane Society (WHS), which is only seven less than this time last year. Unlike in 2019, though, there are more barriers to adoption, including having to make an appointment to see a pet and just generally leaving the house.

When the WHS asked for foster families to house pets during the quarantine, 300 people applied in 48 hours, which is unheard of, WHS chief executive officer Javier Schwersensky says. Toronto’s humane society has 230 animals in foster care, 55 more than in 2019, while humane societies in New York are almost out of animals as dog and cat adoptions and fosters have increased tenfold, according to Bloomberg. (Shares in pet companies have skyrocketed, too; for instance, Chewy, a pet food and supply company, has seen a massive increase in its stock price since March 12.)

It’s thanks to the coronavirus that people are bringing cute creatures into their lives. We need a distraction from all the anxiety we’re feeling right now. Johanna Gabel, a Vaughan, Ont.-based psychotherapist, has brought her dog to work with her for years. She says animals soothe people’s nerves, and their companionship helps people feel less isolated, which is handy right now. The U.S. National Institutes of Health says animal interactions decrease our levels of cortisol, a stress-related hormone, and lower our blood pressure. Animals also offer focus and routine. “They allow us to manage when everything feels out of control,” Ms. Gabel says.

I can attest that all of this is true. About a week ago, we spontaneously called up a ranch and asked if they had any dogs for sale. They had one left. The other eight had been purchased over the previous few days, which was unusual, the ranch owner said – they never go so quickly. An hour later, Ocho, a six-month-old labradoodle, joined the family.

Ocho instantly breathed new life into our home. Our eight-year-old, who is our most sensitive child and has found quarantine especially hard, has taken to her like a parent to a newborn. She fills up her food bowl in the morning, chases her around the house and is the first to cuddle up with her in bed. Seeing the wide smile on her face makes lockdown a little more bearable.

The others are excited to have her, too: Our four-year-old treats Ocho like she’s her new stuffed toy, while the 12-year-old, who never wants to go for walks with her parents, is the first to put on her coat and grab the leash. Even Banjo is happy to have a new friend around.

We’re now so focused on making sure our puppy doesn’t pee on the floor that we’re not thinking as much about the virus. We’re also regularly getting out of the house, more than ever before.

If I had known just how much closer this pup would bring our family together, I may have said yes even before a global pandemic occurred.

Opinion
We can’t just pick up the pieces after the pandemic subsides – we need to keep them together
March 30, 2020 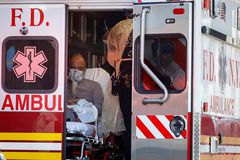