J.M. Opal is Associate Professor and Chair of the Department of History and Classical Studies at McGill University.

Like many Americans, Joe Biden scoffs at Donald Trump’s pretensions to be the “law and order” choice on November’s ballot.

How can a man who routinely fires up his rallies by urging violence against his rivals claim to be lawful? How can a person who retweets dark conspiracy theories represent order? How can a would-be despot with a weak sense of reality wrap himself in the American flag and call for four more years – or, as he recently suggested, twelve more years?

And yet when the President calls for “law and order” on the streets of Kenosha or Portland, he’s saying something that feels and sounds real to many millions of Americans. He’s not so much lying about law and order as tapping into a particular definition of it, one with deep roots in the country’s history.

In early North America as in other settler societies, the law did not move as it did in Europe, emanating from London or Paris and trickling down to the humbler parts of the realm. Rather, the law often went wherever the rights-bearing people – the white settlers – decided to go.

Those settlers saw themselves as civilization’s spear, as inherently lawful people who could (and should) take the law into their own hands.

In the Thirteen Colonies and early United States, this frontier tradition was especially intense because the settlers not only displaced Indigenous peoples but also held Black people as slaves in their midst. From the coasts of South Carolina to the mountains of Tennessee, white Americans felt threatened, surrounded, and thus entitled to inflict rather than obey the law.

Andrew Jackson, one of Mr. Trump’s heroes and president from 1829 to 1837, embodied these extra-legal privileges. Once he tried to take a group of slaves through the Choctaw Nation, in today’s Mississippi. When federal officials demanded to see Jackson’s passport, he showed his horse pistols and replied: “These are General Jackson’s passports.”

So when Mr. Trump promises to defend the (mostly white) suburbs from the (disproportionately Black) cities and cheers gun-toting vigilantes against multiracial protesters, he’s appealing to a powerful sense of law and order.

Mr. Biden and the Democrats should call on a different, more democratic version of law and order – one that also has deep roots in America’s past.

This tradition derives not from frontier violence and slavery but rather from the heady days of 1776, when Americans rebelled against the aristocratic privileges of the Old World. It rests on the principle of equality before the law, of equal access to and treatment by society’s rulebook.

During the early decades of the American republic, this principle helped to protect former Loyalists and political dissidents from both mob violence and state retribution. After all, such persons were entitled to legal protections like everyone else. It also inspired movements for public schools and wider suffrage. Why exclude ordinary people from civic life and self-improvement, if all were equal in the eyes of the law?

Such can-do sentiments once made the United States the inspiration for democratic dreamers around the world. Think of what a campaign based on those beliefs could do for Mr. Biden – and America – today.

First, embracing equality before the law would enable Mr. Biden to denounce Mr. Trump’s nepotism and corruption as un-American. In America, there are no privileged orders; hence, someone with the last name Trump cannot profit from the Presidency or ignore the Constitution. Nor does anyone who happens to be rich and famous have the right to grab women by their privates. In a lawful society, such a person would be arrested for assaulting his equal.

More broadly, embracing law and order in this sense would give the Democrats a proven way to demand progress.

As a moral compass for a political movement, this revolutionary tradition might even make America great again, the vanguard of democratic optimism rather than the mean, bitter place it has become. 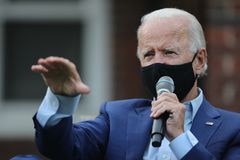 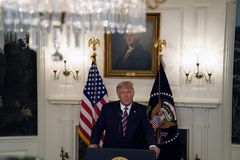