When U.S. President Donald Trump ordered 3M to stop shipping respirator masks to Canada and Latin America, reaction across the political spectrum in this country was swift.

Ontario Premier Doug Ford called it unacceptable and a lousy way to treat “friends.” Saskatchewan Premier Scott Moe called it “nothing short of a betrayal.”

Dwight Ball, Premier of Newfoundland and Labrador, reminded the White House of the pivotal role that his province, and in particular the town of Gander, played in taking care of stranded American airline passengers after the 9/11 attack. Even Alberta Premier Jason Kenney reminded Mr. Trump that Canada had made “very real sacrifices” on behalf of the U.S. in the global fight against terrorism.

It was quite a team effort, one that included premiers not normally known for jumping to the defence of Prime Minister Justin Trudeau, who also criticized Mr. Trump for requesting 3M abandon long-time customers in a time of peril.

Whether it was the tag-team effort of the premiers, or quiet diplomacy by Ottawa, the White House later rescinded the directive. That doesn’t mean the end of medical supply problems – not as long as a mercurial and often vindictive President remains in charge.

But Mr. Trump did do one positive thing: he helped unify Canadian political leaders in this country’s fight against COVID-19. In fact, the response to the pandemic here has, for the most part, ushered in a most welcome post-partisanship period.

A recent story in the Toronto Star talked about the friendship that has blossomed between former enemies Mr. Ford and federal Liberal cabinet minister Chrystia Freeland, who is co-ordinating the government’s coronavirus response with the provinces. Now, the two talk into the night about the economic fallout from the pandemic, referring to each other as their mutual “therapists.”

This truce between rivals has become evident at the provincial level as well. In B.C., onetime Liberal cabinet minister Shirley Bond, as fierce a critic of the NDP as you’ll find, recently took to Twitter to thank Health Minister Adrian Dix for all his hard work, and urged him to stay safe and well. Her hashtag #AllinThisTogether received wide applause from a public not used to such generosity of spirit among political adversaries. This is a bipartisan scene being played out by provincial politicians across the country.

This does not mean that there hasn’t been a time and place for political parties, especially the Conservative opposition in Ottawa, to demand accountability and transparency in the government’s pandemic response. This particularly pertains to the enormous amounts of money being spent to help get Canadians through this. But overall, our politicians have shed their partisan robes for the time being, knowing that in the war we are fighting we are all on the same side.

One appreciates this even more when looking at what is happening in the U.S., where the President has picked fights with those state governors who have not shown enough appreciation for whatever help Washington might be sending their way. The U.S. in many ways remains as divided as ever, even while the country tries to fight a common enemy.

This has led to a fractured response to the pandemic, with some states taking the matter extremely seriously, while others, especially in the Republican south, have been slower to enact social-distancing measures, if at all. Any hopes that there might be a reprieve in the holy war between the country’s two main political parties vanished the moment Mr. Trump blamed the Democrats for, initially, perpetuating the coronavirus “hoax” and later for not leaving the country in very good shape to fight it.

Those Canadians brave enough to follow what is happening south of the border doubtlessly feel even more fortunate to live where they do, to witness in real time what political leadership looks like amid a global calamity.

No, not every move our governments have made have been perfect. There have been mistakes, to be sure. But more often than not, they have been honest ones. And thankfully when they’ve been made, we have not seen the kind of finger-pointing that has surfaced in the U.S. – a phenomenon that only serves to make a nervous populace even more angry and on edge.

In an unparalleled crisis, people want their leaders working together, not at odds with one another.

We have no idea how long this public-health emergency will last. And there will undoubtedly come a time when politics will look and sound a lot like it used to.

But there is also a good chance that some of the antagonism we are used to seeing will disappear. Because after you’ve been through a war with someone, you’re bonded with them for life.

Opinion
Canada’s biggest Trumpland enemy is on the rise
April 7, 2020 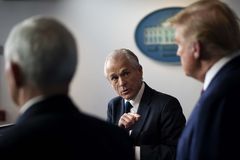