Barry Scott Zellen serves as the Class of 1965 Arctic Scholar at the Center for Arctic Study and Policy at the United States Coast Guard Academy. The views expressed in this article are the author’s own, and do not necessarily reflect official views or policies of the United States Government.

In the context of his broader foreign policy, U.S. President Donald Trump’s reported musing about purchasing Greenland from Denmark may not seem all that unnerving. After all, the former real-estate magnate has already made bold diplomatic moves, such as developing a personal friendship with North Korea’s hitherto reclusive leader and negotiating with the Taliban for nearly a year to try to bring an end to the U.S.'s longest war.

Indeed, buying the island isn’t as wild an idea as it might first seem to some. It may in fact be an example of the U.S. President considering forward-looking, if complex, policy that might strengthen the continent and Greenland itself.

This seemingly unexpected overture has generated much critical reaction in Greenland. But that’s little wonder, given the broad changes that have occurred in the former Danish colony. Greenland has enjoyed much progress, from outright colony to more collaborative home-rule governance in 1979, and – after a 2008 referendum in which 75.54 per cent of Greenlanders supported increased autonomy – even more robust self-rule.

Critics of Mr. Trump’s idea suggest such thinking is better suited for an earlier time in history, when boundaries were exchanged by sovereigns through transactions of this sort, including the United States’ acquisition of Alaska from Russia in 1867. While the outright purchase of such a large portion of the globe is now uncommon, it wasn’t all that long ago that large-scale shifts in borders were the norm. And in today’s world, so much is in flux. Just five years ago, of course, Crimea fell to Russia’s expansionist ambitions, annexed in a rapid conquest largely without bloodshed.

Indeed, it is no secret that Vladimir Putin has been fortifying Russia’s vast Arctic territories, with mothballed military bases undergoing a refurbishment on a scale comparable to Beijing’s fortifications of contested islands in the South China Sea. And while Mr. Trump faces much criticism at home for his seeming impulsiveness on several fronts, he has been consistent in his aversion to war and his desire to keep the U.S. safe.

So as the Arctic thaws, Greenland and the North now represent a place of increasing strategic and economic importance. It’s not the first time, however. During the colonial era, whale oil and Arctic furs – primarily beaver – fuelled the economies of both the New World and Old. Then, in the Second World War, thousands of U.S. soldiers were stationed across the North, where they built the strategic Alaska-Canada highway, the lesser-known Canol Road, and a slew of air bases along the vital Northwest Staging Route ferrying aircraft to the Eastern Front. The U.S. Coast Guard, for its part, lent protection to Greenland – directly so after Denmark fell to the Germans, to ensure it didn’t become a North American beachhead for Nazi advances. After the Second World War, Harry Truman floated the idea of purchasing Greenland from Denmark for US$100-million, an idea endorsed by Time magazine.

The Cold War brought further interest. The United States and Canada built the Distant Early Warning Line across the Inuit homeland, protecting the North American continent from strategic bomber assault, while the Thule air base further augmented the reach of U.S. air power. The waters of the high North Atlantic – the famed Greenland-Iceland-U.K. gap – would play a central role during the U.S.-Soviet showdown. And at the end of the Cold War, foreign-affairs expert Walter Russell Mead wrote a 1992 Los Angeles Times column that proposed, in all seriousness, purchasing Siberia from Boris Yeltsin’s Russia for US$1- to 2-trillion.

To reject outright the idea of a world in which Greenland is an American territory, on a path toward statehood, might be a failure of imagination. In this hypothetical world, North America might be far more secure and united. The defence of Greenland in wartime might be strengthened by its constitutional integration into the U.S. polity. The legacy of colonialism could be more quickly reversed. And the successful purchase and integration of Alaska offers hope that this might work, although despite notable gains by Alaskan natives in the past half century, untangling that legacy remains a work in progress.

The idea is certainly complicated, but it is refreshingly provocative. And buying Greenland might be the kind of unconventional thinking and potential deal-making that fuelled Mr. Trump’s unlikely rise to the White House. It’s what North America might just need in order to not just adapt to the dynamic and literally more fluid world of the thawing Arctic, but to thrive.

Greenland tells Trump it is open for business, but not for sale
August 16, 2019 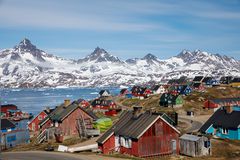