This week was one for the history books. On Tuesday afternoon Donald Trump’s former campaign chair Paul Manafort was found guilty in Virginia on eight felony counts – including tax fraud – while almost simultaneously the President’s former lawyer Michael Cohen pleaded guilty in Manhattan to five charges, including two felony counts of campaign violations, both of which implicated the President. Cable news struggled to keep up with developments and social media was on the verge of melting down. Through it all, however, there remained an air of pessimism; after all, so many beleaguered Americans have watched Mr. Trump face one scandal only to survive to face another. And then another. And another.

When Mr. Trump took the podium at a rally in West Virginia, he was virtually silent on the subject. But, as is usually the case, then came the tweets. First, a head-scratcher that essentially argued the campaign violation felonies Mr. Cohen had plead guilty to weren’t actually crimes. It was followed by a desperate cry of "NO COLLUSION – RIGGED WITCH HUNT!” And then a truly amazing interview with Fox News, which aired Thursday, in which Mr. Trump more or less admitted to committing a federal crime and finally broached the subject of impeachment, saying if he were removed from office the stock market would crash. His defence was laughably weak: “I don’t know how you can impeach somebody who has done a great job.”

And with that pathetic musing, we may have finally seen the beginning of the end of the Trump administration.

Living in the United States these past two years, under a visibly corrupt presidency, has been exhausting. Though evidence of collusion and obstruction of justice have been resting in plain sight, Mr. Trump has yet to be held fully responsible for his actions by the media, his supporters and especially not by the Republican Party, which will be judged harshly by history for letting this mockery occur in the first place. There was a sense that Mr. Trump – who has failed his entire life at nearly every endeavour, yet continued to ascend in power and influence and wealth – would continue to manipulate broken systems and escape consequence. But it appears, at long last, that his comeuppance is inevitable.

The reason is simple: Truth is truth.

No matter how much Mr. Trump tries to shred reality or his attorney Rudy Giuliani chews on the subject of subjective fact, when Robert Mueller’s investigation lays out its findings in black and white, the conclusion is indisputable. In Virginia a jury of 12 people, including a pro-Trump supporter who admitted she “didn’t want Paul Manafort to be guilty, but he was,” looked at the evidence and agreed unanimously on eight of 18 counts. With Michael Cohen, a fierce Trump advocate who for years regularly denied any wrongdoing by his client, we watched an acolyte finally admit in a court of law that fake news wasn’t so fake after all.

There seems now a sense that this dark chapter in American history might pass. At moments this long and disturbing period has felt inescapable, and the rule of law impotent, in its ability to hold someone like Donald Trump accountable. People have suffered, our bedrock principles seemed endangered, our institutions appeared to have failed. But there is hope now that, like a city having been consumed by flood, the waters will eventually recede.

Certainly this isn’t over. Not by a long shot. In Mr. Trump we have a desperate President who is willing to try anything to save his own skin. Time again we’ve seen him throw anyone, regardless of their relationship or loyalty, under the bus if it meant he could emerge unscathed. It wouldn’t surprise anybody if he now tried to fire special counsel Mueller, Attorney-General Jeff Sessions, or simply abuse his powers as President and pardon every one of his endangered conspirators. Desperation breeds desperate acts, and there’s little doubt Donald Trump would be more than willing to take the country down with him.

And that’s just what he’ll do if given the chance. That’s why now, with the convictions, guilty pleas and evidence mounting, it’s more important than ever for Mr. Trump’s base and the Republican Party to face facts and abandon him to his fate. If his supporters continue to remain blindly devoted to their man despite objective truth showing him to be a dangerous felon, there could be unthinkable chaos if he’s challenged. If Republicans refuse to recognize that their duty to the country outweighs their duty to party, we could see the United States of America simply torn apart.

The choices are clear and, at long last, the moment of decision is quickly arriving. Every new day now seems to carry with it overwhelming evidence that Donald Trump has not only committed high crimes but has actively worked to cover them up. Collusion, obstruction of justice, campaign finance violations. Possibly an entire world of criminal activity we haven’t even discovered yet. He has continually disgraced the office of the presidency, and with it the United States.

There’s no denying it now.

There’s no hiding from reality.

He should not be President. Globe editorial: The danger of becoming numb to the circus around Donald Trump
August 22, 2018 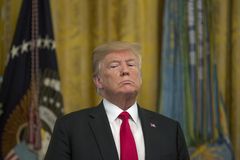 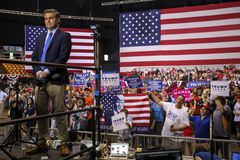