Perhaps the most extraordinary thing about Justice Edward Belobaba’s decision striking down the law that reduces the size of Toronto City Council, is that it is not the most extraordinary thing to have happened Monday. That honour goes to Premier Doug Ford, who not long afterwards said he plans to use the Charter’s notwithstanding clause for the first time in Ontario history. In doing so, the Premier raised real concerns about his government’s respect for the rule of law. He appeared to question the idea that everyone, elected officials and their governments included, is accountable to the law.

Justice Belobaba found the Better Local Government Act, also known as Bill 5, infringed freedom of expression in two respects. First, candidates who had already decided to run under the old system were deeply impacted. The law, he said, “substantially interfered with the candidate’s ability to effectively communicate his or her political message.” Second, by dramatically increasing the size of the wards themselves, the law affected Toronto voters’ right to “effective representation.”

Opinion: Doug Ford is challenging the rule of law itself

What is the notwithstanding clause? Everything you need to know about Ontario’s attempts to reduce the size of Toronto city council

Further, Justice Belobaba found the government could not justify the infringement as a “reasonable limit,” because it had offered virtually no evidence to show why the change was needed on such an urgent basis. Bill 5, he said, was so “hurriedly enacted” that it seemed to be motivated more by “pique than principle.” Justice Belobaba appears to have found the government’s decision to be arbitrary, perhaps even capricious.

Still, his analysis could be difficult to square with Supreme Court precedent, and appears to merge a number of Charter rights together.

Ontario’s plan to invoke the notwithstanding clause – inserted into the Charter as part of final negotiations, and rarely used – was bound to be controversial. One might expect Section 33 to be used to respond to, or prevent, court decisions that imperil public safety (say, that strike down serious criminal offences) or wreak havoc to government’s finances. To use Section 33 then to maintain a preferred size of a city council is completely out of proportion – like using a drone strike to deal with a boisterous block party.

The Ontario government had at least an arguable basis on which to explain the decision: By invoking Section 33, it could have presented itself as maintaining certainty and the status quo for the municipal election while also seeking to appeal the lower court ruling.

The problem is with how the Premier described his decision. He said the use of the notwithstanding clause was justified because of his political mandate. He said he was elected – and Justice Belobaba was merely appointed. The idea that governments might see their legislative goals struck down by a single judge was, he said, “scary.” Indeed, Premier Ford said he is prepared to use the notwithstanding clause again – leaving the clear impression that it will be his preferred response to any judicial setbacks.

There is so much wrong here one barely knows where to begin. First, while the Premier is correct that judges in Canada are not elected, he seems indifferent to the reasons why. We appoint judges and grant them security of tenure to preserve their impartiality and protect them from political reprisal. Indeed, it is the very nature of the judicial role that makes appointment rather than direct election necessary.

More fundamentally, the Premier seems to think his mandate entitles him to do whatever he pleases and any opposition is illegitimate. He suggests there is something wrong with judges overriding democratic decisions – even when those decisions are found to violate the Constitution. To be sure, many governments have expressed frustration with court decisions. But it is virtually unheard of for a Canadian political leader to appear to question the idea that we are a nation of laws.

Some will argue judges in Canada have too much power, and it is refreshing to see someone willing to say as much. Others might say the decision in this case is so deficient that it is tailor-made for the notwithstanding clause. Both are points on which reasonable people can disagree. What is not reasonable is for a premier to question the very basis for judicial review of laws – to question, that is, the very idea of a Constitution. Mr. Ford says he was elected by 2.3 million people. But Ontario has over 13 million residents, all of whom are protected by the Constitution and all of whom deserve political leaders who understand what that means.

There is room for a serious discussion of the notwithstanding clause. The Premier’s comments fall dramatically short of that. They indicate an intention to rule by fiat and to attack the safeguards built into our system to prevent such rule. Eventually, the Premier will discover that his power is not limitless. The notwithstanding clause itself only applies to a few of the Charter’s provisions. But in the interim, he risks enormous damage to the fragile political trust, between the legislative, executive and judicial branches, that makes our system possible.

Opinion
Doug Ford is challenging the rule of law itself
Subscriber content
September 11, 2018 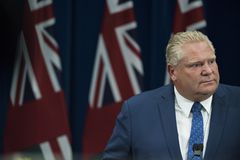 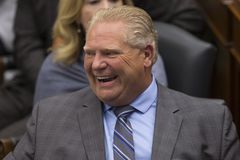 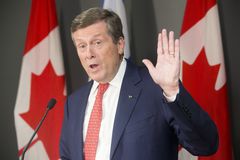