Steven Fletcher was the member of Parliament for Charleswood-St. James-Assiniboia from 2004 to 2015 and Canada’s first permanently disabled federal cabinet minister. He resides in Manitoba and is the principal of Fletcher Focus International.

Every day, amid the wilderness of boreal forest, Canadians driving along Manitoba’s Provincial Road 315 pass by Bernic Lake, just 165 kilometres outside Winnipeg. They have nary a clue that they’ve driven past the world’s largest mining operation for a highly valuable resource – one that’s worth more than gold, yet is little-known in the world at large.

Cesium – a soft, alkali metal that is element 55 on the periodic table – is a rare mineral used in superaccurate atomic clocks, as well as in GPS devices and for oil drilling. Perhaps even more crucially, cesium was also been designated one of the U.S. government’s 35 “critical” minerals for national and economic security interests in 2018, at least in part because the U.S. government is unable to produce it domestically. Manitoba’s Tanco mine, below the floor of Bernic Lake, is the richest known source of caesium given the massive deposits of pollucite ore from which it is mined; there’s enough cesium there to supply the world for 2,000 years at the current rate of usage.

Many years ago, as a geological engineering student at the University of Manitoba, a dozen classmates and I had the opportunity to visit the mine, which also produces tantalum. It was a vast operation – the scale of which looks like something out of a George Lucas film. The room and pillar method of mining simply does not look earthly: Inconceivable volumes of rock and ore had been removed, with the occasional “pillar” supporting the back or “roof,” creating huge chambers – like an endless parking garage for the giant Transformers from the Sunday morning cartoons of my childhood.

But now, that mine threatens to become a matter of national security. In 2019, Boston-headquartered Cabot Corp. sold the Tanco mine to a subsidiary of Sinomine Resources Co. Ltd., a Chinese company publicly traded on the Shenzhen Stock Exchange, for a song – and with it, an enormous portion of the world’s supply of cesium and all the intellectual property associated with its refining.

This monopolizing aligns with China’s years-long effort to dominate the global supply of minerals, including its grip on the 17 rare earth elements – vital for the technology we use today and will use tomorrow, from the solar panels, wind turbines, electric vehicles and fast-charging batteries that could be the key to a clean-energy future to cutting-edge military tech and weapons. Blessed with high-grade deposits – Deng Xiaoping, the country’s late paramount leader, declared in 1992 that “the Middle East has oil. China has rare earths” – China accounts for more than 60 per cent of the world’s annual rare-earth production. But the country, looking to be more than just the assembler of the world’s goods, has worked to secure more supply, broadening its reach through significant imports from places such as Australia and tightening its grip by buying mines in places such as the Democratic Republic of the Congo.

The Chinese Communist Party – which has, in a sustained effort to bolster its grasp on the country’s private firms, turned them into potential government proxies through a 2017 national intelligence law that declares that “any organization and citizen” must “support and co-operate in national intelligence work” – has effectively built a virtual monopoly on the mine-to-market supply chain for the unique group of metals.

That has given China enormous power over the future of technology and over any potential rivals – economic leverage that it has already wielded through export quotas, the imposition of duties and, in one high-profile case, a dispute with Japan over contested waters in the East China Sea. I was in Canada’s federal cabinet at the time and I remember being shocked when Beijing simply suspended exports of rare earth elements to Japan. The embargo lasted less than two months, and the prices of rare earth elements surged between 60 per cent and 350 per cent. Now, China is in position to potentially strangle the free world’s access to critical minerals by cutting off production, further tightening the market or even sabotaging the assets it holds in foreign countries.

The pandemic has only made our vulnerability and dependency on China clearer. Amid lags in Canada’s ability to acquire personal protective equipment, among other things, COVID-19 has exposed our decades-old habit of selling raw goods to other countries to take advantage of cheaper manufacturing costs. But Canada has enormous mineral riches of its own; according to The Globe and Mail, we supply 13 of the 35 minerals the U.S. has designated as critical and have 13 rare earth exploration projects under way. So if China is indeed hoping to put us in another supply-chain corner, what can be done to protect Canada and our allies?

One aggressive approach could be modelled on the way the United States has tackled the massively popular short-form video app TikTok. Over the past few months, U.S. President Donald Trump has crusaded against its Beijing-based makers, ByteDance. Framing his actions as protecting Americans’ data from the “immediate danger” of potential Chinese interception – despite the company’s claims that U.S. data is kept stateside, with a backup in Singapore – Mr. Trump ordered a ban on U.S. downloads of TikTok unless ByteDance was spun off to a U.S. firm.

The boycott, however, was averted by a federal court injunction; now, two weeks after the deadline for a deal, the campaign appears to have been forgotten amid Mr. Trump’s personal election obsessions. But whatever the merits of the U.S. case against TikTok, it is an example of how Western governments can stand up to businesses that have become suspected arms of the Chinese Communist Party. As an interim measure, Ottawa could do something similar, by calling for Sinomine to sell the Tanco mine to a company less likely to “support and co-operate” with the Chinese government, or it could do what it did with the Trans Mountain pipeline: nationalize it until something better can be figured out.

Ottawa should also work to more consistently apply the government’s “national security threshold” in approving international transactions of Canadian assets through the Investment Canada Act. Stephen Harper’s and Justin Trudeau’s governments have cited that regime in the past when they’ve scuttled foreign takeovers of Canadian companies, including space-tech firm MacDonald, Dettwiler and Associates Ltd. (by a U.S. company), crop-nutrient producer Potash Corporation of Saskatchewan (by an Anglo-Australian company) and construction company Aecon Group (by a state-owned Chinese company). Those thresholds should be constantly updated based on evolving geopolitical realities.

For its part, the federal government promised in April to apply “enhanced scrutiny” to any potential takeover of a Canadian company by a foreign state-owned firm and, in January, unveiled a joint action plan with the U.S. on “critical minerals collaboration.” It also joined the U.S.’s Energy Resource Governance Initiative, which aims to “promote sound mining sector governance and resilient energy mineral supply chains.”

But as a mecca for minerals, Canada should also consider working with other similarly minded mineral-rich countries, such as Australia, to protect strategic assets through international defence alliances. We could even bring our own assets to bear as a substitute for financial commitments to the North Atlantic Treaty Organization and the North American Aerospace Defense Command, both of which have been serially underfunded by Canadian governments.

Right now, much of the conversation around Sino-Canadian relations focuses on Chinese telecom Huawei’s efforts to build the infrastructure for our 5G networks. But that makes it all too easy to ignore the other places where Beijing could be hoping to pinch us. The fact that a Chinese company was able to snap up such a massive amount of cesium from under Canadians’ noses suggests we just aren’t digging hard enough. The atomic clock may be ticking

Editor’s note: Dec. 1, 2020: A previous version of this story incorrectly described cesium as a rare-earth element.

Analysis
Can the West’s economies ever escape China’s magnetic pull? The story of rare-earth metals shows how hard it can be
August 9, 2020 Opinion
Alberta has a rare rare-earth opportunity on its hands – if it chooses to seize it
January 22, 2020 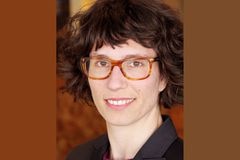