Driving through Pennsylvania, I was tuned in to an oldies station that was playing At the Hop, the dance sensation that swept the nation in the 1950s, when on came the Rush Limbaugh show.

On this day, radio jock Limbaugh, one of the most influential troglodytes America has ever produced, was mocking various entities who were not of his or Donald Trump’s political persuasion.

One target was the Democratic leader in the Senate, whom he called “Chuckyou Schumer.” Another was Canadian Prime Minister Justin Trudeau, whom he belittled as “Blackface Trudeau.”

He teed off on the PM on account of his reaction to the shooting down of Ukraine International Airlines Flight 752, which killed 57 Canadians. Mr. Trudeau blamed it on an escalation in the region, the implicit suggestion being that the U.S. was partly responsible, as well as Iran. That is a reasonable position to take but one that predictably angered Trump defenders.

Mr. Limbaugh huffed and puffed and sneered at Canada. And well he and his ilk might. North of the border, his hero, Mr. Trump, is hardly a hit. A poll to be released this week by Ekos will show the president’s disapproval among Canadians is a staggering 86 per cent. At a fair guess, Mr. Limbaugh, no one has fared worse since polling samples included Count Dracula. By contrast, Barack Obama’s unfavourability rating among Canadians according to Ipsos was a tiny 20 per cent when he left office.

The Iranian crisis has certainly added to Mr. Trump’s pitiful Canadian standing. Mr. Limbaugh and company can’t understand it. They don’t see Canada as being a victim of the collateral damage of the decision by Mr. Trump to kill Iranian General Qassem Soleimani.

They maintain it was Iran’s provocations, chiefly the violent protests at the U.S. embassy in Iraq, that triggered a very justifiable Trump response. It wasn’t extreme, they say, though eliminating the terrorist cult-figure Soleimani would be the equivalent of Iran, following violent protests at one of their embassies, assassinating an American general of the stature of a Douglas MacArthur.

Trump defenders are correct of course in saying the obvious culprit in the downing of the plane was Iran and that its criminal regime should bear the brunt of the Canadian outrage, not the U.S..

Collateral damage signifies an unintended outcome. Another grievous example of it is Canada’s broken relationship with China. Mr. Trump bears no direct responsibility for this. He had no way of knowing that as a result of Canada’s arrest of a Huawei executive on a U.S. extradition request, Canadians would be detained in China, trade would be significantly reduced, relations put in deep freeze.

There’s collateral damage for Canada in what Mr. Trump is doing to combat the climate crisis, which is nothing. There was collateral damage in the NAFTA trade renegotiation he mandated, namely his steel and aluminum tariffs as well as destabilizing of the bilateral relationship for a three year period.

But nothing compares to the loss of 57 lives and there is no escaping the thought that it wouldn’t have happened had Mr. Trump chosen a more proportionate response.

Canadians like Michael McCain, CEO of Maple Leaf Foods, are not prepared to give the president a pass on a collateral damage basis. In a tirade of tweets picked up by American media, he railed at how Canada had suffered at the hands of a dangerous irresponsible narcissist with an “ill-conceived plan to divert attention from political woes.” Yes, Mr. Trump had taken out a “despicable” terrorist but “there are a hundred like him, standing next in line.”

Had, as Mr. Trump claimed, there been a verifiable major and imminent threat to the U.S., there would be far less cause for Canadian bitterness.

But that claim is being shown to be groundless. Defence Secretary Mark Esper contradicted Mr. Trump Sunday, saying there was no compelling evidence showing that Iran planned to strike four U.S. embassies. Reports in The Wall Street Journal and The New York Times suggested the strike was politically motivated. To get support from some Republican senators to acquit him on impeachment charges, Mr. Trump had to satisfy their wish to take a harder line on Iran.

Mr. Trump was finally reduced to conceding on Monday that “it really doesn’t matter” whether there was an imminent threat. All his administration’s talk of it is taking on the look of the imaginary weapons of mass destruction charade in the Bush administration.

Collateral damage for Canada was limited then because Prime Minister Jean Chrétien rejected going to war with the Americans.

There was no such opportunity to avoid collateral ruin this time.

Congressman pushes back at Trudeau comments, says U.S. not to blame for downed Ukrainian airliner
January 14, 2020 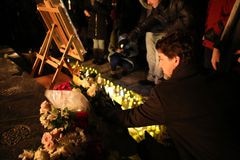