There may be no better example of the unique and difficult challenge Erin O’Toole faces as leader of the federal Conservative Party than his recently announced policy on mandatory vaccinations.

Mr. O’Toole is against measures that force Canadians to get vaccinated, regardless of what line of work they may be in. Liberal Leader Justin Trudeau has said federal workers must be vaccinated, as well as anyone who wants to fly or travel by train.

A majority of Canadians are fully or partially vaccinated. And most of them, polls suggest, support vaccine mandates or vaccine passports that bestow certain rights and privileges on those who have chosen to get jabbed. In his heart, I think Mr. O’Toole believes this also. He just can’t endorse that policy because it would alienate a faction of his base – the libertarians and vaccine deniers – who think the state has no right imposing restrictive measures on anyone. These are voters Maxime Bernier and his People’s Party of Canada are trying to steal away from the Conservatives.

Welcome to Erin O’Toole’s world – or rather, his nightmare. While his central challenger in this election, Justin Trudeau, can be many things to many people, the Conservative Leader does not have that option. He is bound, in many ways, to a segment of the population resistant to change and who are suspicious of government intrusions of any sort into their lives, regardless of the reason.

This is why Mr. O’Toole can’t talk as forcefully as perhaps he needs to about an issue such as climate change. He has vowed to bring in carbon pricing but cap it at a mere $50 a tonne, which renders it mostly symbolic. (The Liberals will raise their carbon price to $170 a tonne by 2030.) Mr. O’Toole is restrained by conservative supporters in the Prairies, especially Alberta, who view carbon pricing as a useless tax grab and nothing more.

But how can someone who wants to lead this country be hamstrung politically when it comes to the No. 1 issue facing the planet, let alone the country?

Instead, many conservatives in Canada, including Alberta Premier Jason Kenney, prefer to ridicule and demonize those calling for stricter policies to cut emissions. While they are a minority, they are a minority whom Mr. O’Toole feels the need to protect – and pander to.

A ballooning federal debt would seem to be a natural opening for the Tories. However, many of the programs that debt has financed, including those associated with pandemic relief and the $10-a-day child care promise announced in the last budget, are incredibly popular. This has put Mr. O’Toole in the position of saying he’d balance the budget – but not for a decade. That’s about as meaningless a pledge as there is.

Mr. O’Toole is also not helped by the fact that many high-profile right-wing politicians in the country currently are a drag on the Conservative brand. That would include Ontario’s Doug Ford, Manitoba’s Brian Pallister and, perhaps most of all, Mr. Kenney in Alberta. His stock has fallen so far that the Liberals are eyeing the possibility of picking up four seats or more in the province in this election.

Mr. O’Toole has other issues to contend with as well. Some of his party’s ads have been downright appalling and have done nothing more than cast doubt on the Tories’ suitability for power and the leader’s personal judgment. He’s being sabotaged by his own marketing team.

Finally, poll after poll this past year has contained nothing but bad news for the Conservatives. Not only has the party consistently trailed the Liberals, but the numbers make clear that Canadians aren’t particularly enamoured with Mr. O’Toole, either. People find him bland, and lacking charisma.

A survey by Leger in July, for instance, indicated that more Canadians thought NDP Leader Jagmeet Singh would make a better prime minister than Mr. O’Toole. Mr. Singh even held a lead over Mr. O’Toole in the West. Ouch.

In total, this is a lot for any political leader to overcome. Erin O’Toole isn’t just fighting Justin Trudeau and the other federal leaders. In many respects, he’s also battling many in his own party – which is never good at election time. 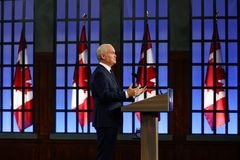 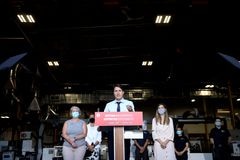 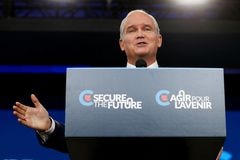