Declan Hill is an associate professor of investigations at the University of New Haven and author of The Fix: Soccer and Organized Crime.

In the fog of COVID-19, all sorts of unexamined things go on in the corridors of power. One of the greatest is the introduction of Bill C-13 in our federal Parliament. If it passes, it will legalize single-event sports gambling across Canada. It mirrors similar legislation that Ontario Premier Doug Ford’s government has tabled.

In the current system, gamblers have to place a series of bets – all of which must be correct to win – with a government-regulated body like the Ontario Lottery and Gaming Corp. If passed, the new rules may permit provinces to license private companies to offer bets on single games.

Bill C-13 is a profound piece of legislation – as big as the legalization of cannabis. Its proponents downplay this sweeping change. They say it will boost jobs and add to tax revenues. It’s no big deal, they say. It will be just like Britain, which has wide-scale sports gambling. However it should be noted that Britain has more betting shops than Starbucks. Many of these shops are in the poorer sections of town – posing as an effective regressive tax on the people least able to afford it.

In general, however, legalizing single-event sports gambling is a good idea. Currently, illegal gambling is one of the main revenue generators for organized crime. I asked Joe Pistone, the FBI undercover agent also known as Donnie Brasco, whether drugs or gambling were more important for the mob. He did not hesitate: “Gambling. Because it is everyday. And you also make money on loans to the gamblers and then you get to take their businesses when they get into debt.”

The Rizzutos, the Mafia group that corrupted large sections of the Quebec construction and government services, also ran an illegal sports gambling ring that police estimate was worth $500-million a year. Individuals connected to the Hells Angels in Ontario were running a multimillion sports gambling outfit with the ‘Ndrangheta, the mobsters who killed off the Rizzutos. So any legislation that can help reduce this criminal profit is a positive step. However, Bill C-13, as drafted, is a bad idea.

One problem is that there is no specific law making match-fixing illegal. Our greatest generation of men’s soccer was in the late 1980s. But the team disintegrated after a faction of the players sold a game against North Korea to Singaporean match-fixers. Their punishment? Zilch. A court decided not to proceed with the case, in part, because there was no specific legislation against fixing.

In the 30 years since the case was dropped, there has been no law enacted against match-fixing in Canada. It’s not as if we didn’t have enough fixed matches. The Canadian Soccer League, a semi-professional outfit in Southern Ontario, was notorious for being tainted with fixing.

At international police conferences, the Interpol delegates would single out Canada as a bastion of match-fixing. They led a delegation to our country in 2015 to share their knowledge of the problem and, specifically, which games were being fixed.

The response of Canadian authorities? A giant metaphorical shrug of the shoulders. “There is nothing that we can do.”

This shameful lack of response is important for the expected passage of Bill C-13, which will give Canadian athletes much easier access to gambling markets. Indeed, with athletes probably playing in stadiums and wearing shirts sponsored by bookmakers, how can we not expect match-fixing to rise?

There is another problem – a growing tide of sports gambling addiction. Legalized betting will be sold as a game of skill: the savvy bettor against the wily bookmaker.

A colleague ran a European sports book with about one million customers. “How many of your clients won over one year?” I asked.

He did not mean five thousand or five hundred, but five people. Only five people were able to beat the bookmakers over one year. The rest – all 999,995 – lost money.

The problem with easier access to sports betting is that it will fuel addiction in the demographic that is not always known for making sensible choices – men aged 14 to 35. In Britain, there have been scandals linked to bookmakers allegedly targeting adolescents. It is part of the reason why tens-of-thousands of British teenagers were reported by their Gambling Commission to be “problem gamblers.”

There is an easy solution. Canadian politicians should modify Bill C-13 to ensure that all Canadian bookmakers pay for effective gambling addiction research, education and treatment. They should also enact a specific federal law that makes match-fixing illegal. Until that happens, the passing of Bill C-13, and any provincial law that legalizes sports gambling, should wait. 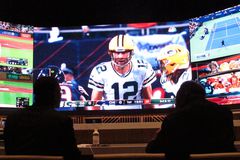