In the summer of 2010, when I was living in London, the mayor came to our street party.

My neighbours were normally immune to the charms of celebrity, or at least they pretended to be, in a very English way. The famous actor who lived a few doors down routinely strode to the grocery store gawk-free.

But when mayor Boris Johnson showed up, my neighbours poured onto the street like Victorians who’d been told a strange sea creature had washed up on the banks of the Thames. At the time, the tabloids were filled with stories about a “love child” that the mayor had allegedly produced with a woman who was not his wife. The whispered agreement on our street was that the baby in question did indeed look like him, but then all babies look like Boris Johnson.

In those days, Mr. Johnson was, it’s fair to say, a bit of a joke: An affable quiz-show host, novelist and newspaper columnist who spoke the vocabulary of P.G. Wodehouse, sprinkling “piffle” and “tosh” behind him as he went. He was a former journalist and shadow Tory cabinet minister who’d been fired from two jobs (for making things up in the former case, and for lying about an affair to his boss, the Conservative leader, in the second). He was famous for saying and writing outrageous and sometimes racist things, which only seemed to increase his popularity. Perhaps this particular trajectory is beginning to sound familiar?

Now the joke has lost some of its lustre as it moves from “ha-ha” to “oh my God.” Mr. Johnson once said, “My chances of becoming prime minister are about as good as the chances of finding Elvis on Mars, or my being reincarnated as an olive.” Well, it’s time to pour a restorative martini because Mr. Johnson is the front-runner to succeed Theresa May as Conservative leader, and thus prime minister.

Mr. Johnson’s two-year tenure as foreign secretary was filled with so many gaffes, some trivial and others threatening Britain’s relationship with other countries, that The Economist wondered in 2017: “One of the great puzzles of politics is how the foreign secretary keeps his job.” Yet this period of high-profile mediocrity had no bearing on Mr. Johnson’s popularity, in a stellar example of what my old boss used to call “failing upward.”

Choosing Mr. Johnson to run Britain at this particularly fraught and dangerous time seems like asking a children’s party magician to perform brain surgery, although this might be unfair to party magicians. The hardline Brexiter is currently facing a private prosecution for “misconduct in public office“ over the Leave campaign’s false claims that Britain paid the European Union £350-million ($600-million) a week. That figure was plastered on the side of the Leave campaign’s bus – which just happened to be manufactured in Germany and Poland.

Speaking of which, British manufacturing is in a huge slump. Mr. Johnson has said that the country shouldn’t be afraid of a no-deal Brexit – still a possibility if the current impasse isn’t resolved by the Oct. 31 deadline for Britain to leave the EU – which flies in the face of the business community’s warnings. In March, the country’s largest trade union and its major business lobby warned of the consequences of a no-deal scenario in a letter to the Prime Minister: “Our country is facing a national emergency … The shock to our economy would be felt by generations to come.”

All this is happening while the country is reeling from a decade of austerity measures imposed by the Conservative government. The United Nation’s special rapporteur for extreme poverty and human rights, Philip Alston, just issued a blistering report about the “great misery” and “tragic social consequences” of the austerity decade, including sharp rises in homelessness, child poverty and the use of food banks. “The bottom line is that much of the glue that has held British society together since the Second World War has been deliberately removed and replaced with a harsh and uncaring ethos,” the report says.

Somewhere in Britain, in Glasgow or Penrith or Billericay or possibly even London, there may be a woman or man who could put this bus back on the right road. Someone who could unite the Leavers and Remainers, the haves and the have-nots, the people whose life expectancy is plummeting and those who can afford to buy organic courgettes in Waitrose. Is that person the one who wrote, “Voting Tory will cause your wife to have bigger breasts and increase your chances of owning a BMW M3”? Perhaps that is precisely who the Conservatives will choose, as they snort-laugh their way through a decent claret. In which case, good luck, chaps. It was nice while it lasted – for some of you, anyway.

If the past few years have taught us anything, it’s the danger of laughing at someone who seems like a political clown. I don’t think Mr. Johnson is a clown in the sense of being clueless: He was a competent and popular mayor of London. His bumbling-toward-the-top is a very British way of seeking power without appearing to seek it, ambition wrapped in a ratty old jumper you keep in your country place. I am reminded of something that journalist Yasmin Alibhai-Brown said to me when I was writing a profile of Mr. Johnson a decade ago: “There’s a very serious right-winger under this man’s charm and buffoonery and it needs to be seriously examined.”

Now it’s up to the Tory MPs who will choose a two-person shortlist for leader, which will then be voted on by the party membership of 130,000 or so. In some ways, it’s a question that every party faces: the risk and exhilaration of the future, or the comfort of the mythical past? This time, they can’t really afford to get it wrong.

Is that politician lying? In a democracy, only you can decide
May 29, 2019 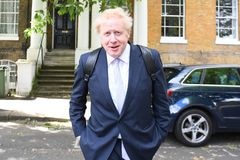 EU tells Britain: There will be no renegotiation of Brexit deal
Subscriber content
May 28, 2019 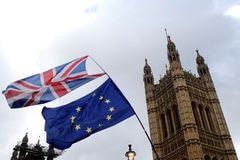