Kim Beaudin is the national vice-chief of the Congress of Aboriginal Peoples.

At the release of the final report of the Missing and Murdered Indigenous Women and Girls Inquiry, commissioner Qajaq Robinson reflected on how our criminal justice system fails to protect Indigenous women, girls and 2SLGBTQQIA people, and how the men responsible for their victimization must be held to account.

Gladue is a set of sentencing requirements that directs courts to consider the “unique background and circumstances” of Indigenous offenders as well as any reasonable alternatives to imprisonment. The requirements stem from a section of the Criminal Code that became law in 1996. This reflected Parliament’s concerns about the courts’ use of incarceration for Indigenous offenders, who at the time comprised roughly 3 per cent of the Canadian population but 11 per cent of federally-sentenced offenders. The purpose of the section was to remedy the over-incarceration of Indigenous people.

A 1999 Supreme Court interpretation of the law in a case called R v Gladue prompted the creation of “Gladue reports,” which detail the histories of offenders to help judges craft appropriate sentences.

Ms. Robinson’s criticisms of Gladue are balanced by the commission’s calls for justice, which press the government to recognize Gladue reports as a right and to adequately fund these reports and the community-based, culturally appropriate alternatives to incarceration that are integral to Gladue’s remedial goals.

At present, Gladue is not a guaranteed right. Whether an offender can get a report depends on where they are located, the perceived seriousness of the offence, the availability of funding for reports, and whether the court and client are willing to wait the three to eight months it can – but shouldn’t – take to complete a Gladue report. As such, the failings of Gladue are better understood as further examples of the failings of governments to respect and fund the rights of Indigenous people.

The commission also urges the creation of national standards for Gladue reports. At present, research indicates that the quality of Gladue reports is at best inconsistent. Reports, writers and those who train them are not subject to any oversight or clear standards of practice. For every good report produced there are many that do not serve the courts or fully respect Indigenous life stories that are the heart of the Gladue process.

At present, we are participating in a national working group on Gladue, led by Dr. Jane Dickson of Carleton University, who is also leading a national research project on Gladue in Canadian courts. The group has made great progress toward a set of standards and approaches that respect Indigenous cultures and practices, and dovetail these with the legal requirements of Gladue.

Gladue reports are a vessel for Indigenous stories and are integral not only to legal justice for Indigenous people before the courts, but to the larger social justice goals intrinsic to reconciliation. But in the absence of robust support and standards for writers, reports and healing interventions, we will never realize Gladue’s remedial goals.

Until governments respect the spirit and intent of Gladue, they will continue to be complicit in the violence visited upon Indigenous peoples and their spirits, leaving justice and reconciliation as dim and distant dreams.

Therefore, the Congress of Aboriginal Peoples calls on the government of Canada to produce, enforce, and fully fund national standardization of the Gladue process to ensure equitable access to justice for all Indigenous offenders. 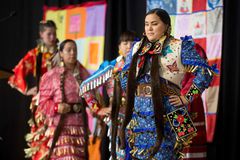 Opinion
We must not forget men when we talk about Indigenous trauma
June 16, 2019 Opinion
An idea: read the report on Indigenous women’s lives before dismissing it
Subscriber content
June 13, 2019