Beth Raymer is the author of Lay the Favorite: A Memoir of Gambling, a chronicle of the years she worked in high-stakes sports betting. Her novel Fireworks Every Night will be published next year by Spiegel & Grau.

For my dad, life as he knew it ended on Spoonbill Lane.

From the driveway one spring day in 2011, we stood and looked at our seashell pink, 3,000-square-foot Florida home purchased eight years earlier – its front door now padlocked by the bank. The pool, once a perfect square of turquoise, was now coated in algae. Bed sheets covered the windows so collectors couldn’t see inside. Grass grew from the roof.

Dad picked dirt from his fingernails with his Big M Players Advantage Card. This is the same man who left for work every morning at 7:30 a.m. and put in 14-hour days; who competed furiously for – and won – every bonus the dealerships ever offered. He had a wife, a cat, two daughters. At this point, my dad had none of them left, except for me.

“Well, Pumpkin. Guess I’m sleepin’ on the streets,” he said.

Then he tossed two garbage bags stuffed with the sum total of his worldly possessions into the back hatch of his Corvette.

That experience is specific to me, but may resonate all the same for those whose loved ones have endured addiction: a person so waylaid by their mental health that they become someone else completely – and neither logic nor emotional pleas can shake them.

In the past few years, society has evolved on issues of addiction. Rather than dismiss those who have been affected by the opioid crisis as junkies, for example, governments are now working to address the systemic causes and conditions. Many of the approaches toward alcohol addiction revolve around seeking and finding forgiveness. And there is more awareness about mental health than ever before, leading to frank and important conversations about issues that used to be too difficult to confront.

But when Liberal MP Raj Grewal announced that he was dealing with personal and medical issues – later revealed by the Prime Minister’s Office to be high-stakes “gambling problems” that had put Mr. Grewal millions of dollars in debt – the response was largely ugly. In some ways, that’s understandable: The situation remains complicated, questions have yet to be answered, and this is partisan politics, after all. Still, the response to Mr. Grewal’s admission only exposed how gambling remains an addiction that has yet to receive the benefit of understanding and empathy.

Why is that? Because gamblers aren’t seen as sick. They’re seen as stupid.

With substance abuse, addicts have a medical explanation for their bad behaviour: Repeated chemical exposure physically alters the brain. But gambling addiction occurs without any apparent “substance” at all. Therefore, many believe, gamblers are entirely to blame for their character flaw; it must be their low IQ that causes them to lose so much money.

After all, if it’s done properly, gambling can make you successful. When I got married, I used my wedding money to bet on sports and paid off a chunk of my student loans. Some people even make a living. In the five years I spent working for gamblers in Las Vegas, New York and Curacao, I saw it every day: Poker players who hadn’t held a conventional job since the 1980s lived in homes with reasonable mortgages and sent their daughters to private school; lifelong backgammon players with numerous vacation homes and 401(k) plans.

Not that it takes someone steeped in gambling culture to notice this. The layman sees the familiar faces on ESPN taking home yet another World Series of Poker bracelet or the shrewd horse handicappers on TVG. Browse the “games" section at a bookstore and one title after another promises secret tricks to beat the dealer, get the edge at craps or win at blackjack. That was my dad’s game; Mr. Grewal’s, too.

Of course, nobody’s ever written a book about how to succeed in snorting heroin.

For all the excitement that casino games generate, many men who gamble high-stakes, as Mr. Grewal professed to do, see it as a test of intelligence. Many of them not only want to be the best player at the table, they want to be perceived as the smartest person in the room. In her 2015 study Perceived Stigma and Self-Stigma of Problem Gambling, Nerilee Hing asked problem gamblers how they felt others viewed them. The gamblers overwhelmingly used the words “stupid” and “foolish.” They recognized that people generally prefer to keep their distance from them. The reason, as one gambler put it: “They think you’re an idiot.” For his part, Mr. Grewal characterized his gambling a little more gently, referring to it in his announcement as “senseless.”

But gambling addicts are smart – and they badly want to prove it. “Lemme put it this way," Hall of Fame poker player Phil Helmuth once told me, "I was the oldest kid in my family – the one with the bad grades while everybody else had straight As. So I put all my effort into winning games. I spent my time playing Monopoly perfectly. Yahtzee, perfectly. I gave myself no choice: I had to beat all my little brothers and sisters.”

Losing plays into the gambler’s own insecurities about his intelligence, and this is the real spark to their mental-health issue. “You’re not addicted to gambling, you’re just not good at it,” says the voice in his head, running laps around his listless prefrontal cortex. “Other people are, but not you.” When a gambler plays a game a lot, it colonizes his dream state. As he sleeps, he doesn’t dream of big pots and flashing lights, but ways to figure out how to play smarter. “What’s the most reasonable way to play this hand? I’m going to fold," he thinks. "I can do better.” And losing only makes these gamblers more desperate to conceal from family and friends their growing debt. Juggling credit cards, mortgages, bank loans, retirement funds, money becomes a free-floating set of balls – just one more dizzying game to play until they are so deep in debt that the only way out, as they see it, is suicide. In this sense, gambling kills them because it doesn’t actively kill them.

This is who they are, fundamentally. It’s why the history of gaming is littered with brilliant gamblers who made fortunes playing one game, only to lose them playing some other game: They couldn’t stand that they weren’t smart enough to conquer every game that required thought and skill. Stu (The Kid) Ungar, the greatest Texas hold ‘em player of all time, was just as famous for his high IQ and well-timed bluffs as he was for his degenerate sports betting; toward the end of his life, he played poker just to pay off his football bets. Michael Jordan, one of the most dominant and competitive athletes to ever play professional sports, admitted that at the height of his basketball career, he had a hard time walking away from the blackjack table.

With stories such as these, it’s easy to see why gambling is connected to ego and delusion. But it’s also addictive, just as much as substances. And there are real consequences to a lack of empathy: Less compassion means less advocacy for treatment options, and less treatment leads to worse outcomes – and suicide rates among gambling addicts are already staggeringly high. The National Council on Problem Gambling has estimated that one in five problem gamblers tries to kill themselves, about twice the rate of other addictions.

And that’s what people have a hard time wrapping their heads around: Problem gambling is addiction stripped to its core. Compulsive behaviour, no matter the negative consequences, has the joyful qualities that make it addictive – pleasure, money, thrill – but it also has the stuff that hits at gamblers' insecure, psychic pain, which is what makes that addiction a real sickness. It’s the perfect, dangerous combination – kind of like cocaine and fentanyl.

In the months and years following my father’s foreclosure, he continued to gamble. He lived in his Corvette, which he kept in the casino parking lot. When it got repossessed, he lived behind the casino dumpster. On holidays, in an effort to keep our father-daughter relationship alive, I visited him. No longer able to afford the minimum blackjack tables, he sat along the wall, in the dark, playing penny slots. Unconcerned with eating, he was rail-thin. He showed no affection whatsoever – not even a hug. He simply couldn’t bother to pull away, even for a second, from a game designed to make him lose.

Throughout his life, Dad kept a record of his gambling wins and losses. Once, when I was home from college, he handed that list to me out of the blue. I have no idea why. The amounts he was losing on a daily basis were staggering. I was shocked, but I kept it inside. I didn’t want him to feel stupid.

Globe editorial: It’s time for Raj Grewal, and the government, to turn over their cards
December 7, 2018 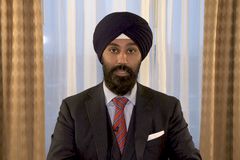 Raj Grewal told Liberals he had more than $1-million in debt: source
November 28, 2018