No one else wanted the job that became Yves-François Blanchet’s nine months ago.

For the previous two years, the Bloc Québécois had been embroiled in internecine warfare. Its last leader, sovereigntist hardliner Martine Ouellet, had faced an open revolt. The party barely registered in the polls. By the time Mr. Blanchet inherited the leadership in an uncontested race, the party’s death appeared imminent.

Yet Mr. Blanchet, 54, will now head to Ottawa with the largest Bloc caucus in almost a decade. The party rose from its deathbed to finish first among francophone Quebec voters on Monday, proof both of Mr. Blanchet’s unsuspected political smarts and the enduring strength of Quebec nationalism. The Bloc is a player again in national politics. That stands to make the next Parliament far more raucous than the last one.

What will Mr. Blanchet make of the mandate Quebec voters have handed his party? He has rejected accusations from other party leaders that the Bloc would use its renewed heft in the House of Commons, where it has not held official party status since 2011, to promote another referendum on Quebec sovereignty. He has insisted that the Bloc would work to advance Quebec’s interests within Canada.

Still, not since the mid-1990s, when the Bloc reigned supreme in Quebec and the Reform Party dominated in Western Canada, has the country faced such stark regional divisions. It might not take much to thrust us into a unity crisis as excruciating as the last one. Quebec and Alberta are at each other’s throats over pipelines and equalization payments; neither seems interested in a dialogue with the other.

“Canada is in many ways closer to Saudi Arabia or Russia than to Quebec,” Mr. Blanchet said at a Bloc rally on Saturday in a speech loaded, for the first time in this campaign, with affirmations of the party’s sovereigntist raison d’être.

That Quebeckers have switched federal parties again is hardly the surprise of the century. In 2011, they abandoned the Bloc for the New Democrats in what turned out to be an unsuccessful attempt to prevent the Conservatives from forming a majority government. In 2015, Quebeckers took the same bet on Justin Trudeau’s Liberals as other Canadians, suggesting a convergence of interests from coast to coast.

Now, Quebec has gone its own way again. How come?

Quebeckers’ return to the Bloc has at least as much to do with Mr. Blanchet – his strong debate performances certainly won over many Quebec voters – as with a failure by the Liberals and Conservatives to take the Bloc seriously enough until it was too late. Neither of the main parties had been expecting the Bloc to be a factor in this election and developed their campaign strategies accordingly. The Grits and Tories fired missiles at each other, allowing Mr. Blanchet to go unchallenged.

This marks the fifth federal election in a row in which the Conservatives blew their prospects for a breakthrough in Quebec because of their own mistakes. Early campaign polls showed the party poised to double its seat count in the province from the 11 ridings it held at dissolution. But after a cringe-worthy performance by Conservative Leader Andrew Scheer in the first French-language televised debate, in which he refused to acknowledge his personal views on abortion, the Conservatives dived in the polls.

The Liberals had been banking on the collapse of the NDP’s remaining support in the province to build on the 40 seats the party held at dissolution. Instead, NDP Leader Jagmeet Singh surprised everyone with strong performances in both French-language debates. NDP support rose – not enough to save the party’s 14 Quebec seats, but enough to deprive the Liberals of victory in tight multiparty races.

The fuss English Canada made over the Coalition Avenir Québec government’s Bill 21, which got more airtime in the English-language debate than either of the French ones, was a gift to the Bloc. It had targeted the same francophone voters who gave the CAQ a provincial majority last year. Among the federal parties, the Bloc had the field to itself in standing up for Bill 21, which bans some provincial employees from wearing religious symbols. That alone might have turned the tide. But it was Premier François Legault’s rebuke of Mr. Trudeau for suggesting a re-elected Liberal government might join a constitutional challenge of the law that put the wind in the Bloc’s sails.

It may not, however, be smooth sailing from here on. Mr. Blanchet will face relentless pressure from the party’s hard-core separatist base to put sovereignty at the top of the party’s agenda. He will face a tough task keeping the base happy without alienating the soft nationalists to whom the Bloc owes its renewed lease on life.

For now, however, the Bloc is back. And the rest of Canada better get used it. 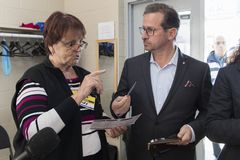