In the 1980s, many Western Canadians felt detached from the decision-making centre of the country.

That angst and resentment was embodied in the slogan “The West Wants In.” The sense of alienation that existed west of Ontario would give rise to the Reform Party, which would elect dozens of MPs from across Manitoba, Saskatchewan, Alberta and British Columbia in the 1990s and use Parliament Hill as a megaphone for their issues.

As the economic might of the country shifted westward, political power eventually came with it. The 2000s saw the rise of a prime minister from Calgary, Stephen Harper, who would stay in office for a decade. The Reform Party soon became a distant memory.

Yet, here we are, decades after Reform’s birth, and the anger and bitterness once so palpable in the West is again bubbling to the surface. This time, however, the dynamics are fundamentally different. This is not “The West Wants In: Redux.” Rather, some are asking if it’s time for the West to leave.

Of all the complex and challenging issues facing a freshly re-elected Liberal government, this is the most vexing. How do you address the visceral sense in Saskatchewan and most acutely in Alberta that something has gone awry? That the political and economic arrangements inside Canada aren’t working any more? (The term “Western alienation” this time around is a misnomer; the bitterness and talk of separatism is confined largely to these two provinces.)

This will be a huge challenge, because every argument around this matter begins and ends with oil. And pipelines. And building more of them.

Barring some unexpected, cataclysmic economic event, dealing with Alberta’s energy future (and by extension Saskatchewan’s) is going to have to be a top priority for the new government. Unattended, the embers of alienation and separatism, now being stoked by provincial leaders unabashed about making political gains at the expense of national unity, will only become more intense.

The only chance I see for any kind of breakthrough is through a national summit on Canada’s energy and environmental future, because the two are inextricably linked. To pretend otherwise is foolish and naive.

Such a summit would have to answer the question: How do we build pipelines, which will increase our emissions, and still meet our Paris Agreement targets? (If we build any at all.) It will not be good enough for premiers Jason Kenney and Scott Moe to say that’s not their problem. It is. It’s not an option for Alberta to say: We make an outsized contribution to equalization so we get a free pass when it comes to greenhouse gas emissions – let the rest of Canada sacrifice on our behalf.

That will never work.

Nor is it an option for those living in Alberta and Saskatchewan to pretend there is no climate problem. Even the then-president of Suncor Energy, Steve Williams, told an audience in Calgary that ignoring reality is not viable. He lamented the fact the climate-change debate has become so polarizing, that there are people still fighting the basic science.

Mr. Williams urged politicians who might have climate-change deniers among their support base to become braver, to correct people, to speak out more strongly about what needs to be done. And what needs to be done is planning for a future that doesn’t include a thriving fossil fuel industry.

The government of Alberta, with the co-operation of Ottawa, should already be making plans to become a green energy superpower. If that transition takes major subsidies from the federal government, so be it. It would put thousands and thousands of people in the province to work. And likely, too, in Saskatchewan, which is well situated to play a key role in the renewable energy field.

Hopefully, now that the election is over, some of our political leaders can put down their poison dart guns and start thinking more rationally and less selfishly. This country is worth fighting for. And worth sacrificing for. 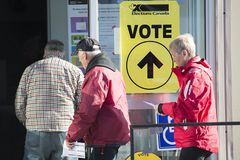