Chad Tobin is a photographer from Sydney, N.S.

It feels entirely appropriate that one of the most iconic photographers of America and its people was born in the Swiss city of Zurich and lived out his later years in a lushly wooded, coastal town on Cape Breton Island.

That’s where I met Robert Frank, 10 years ago, after deciding to undertake a pilgrimage of sorts to Mabou, N.S., where the world’s most influential living photographer had a home since the early 1970s. He is most famous for his book The Americans, of course: a clutch of gorgeous and humane black-and-white photographs capturing different angles of the usually bluntly portrayed prosperity of the United States in the 1950s – people from all walks of life in America’s diners, parks, streets and crannies, often with the Stars and Stripes sneaked into the shot. That collection, with its foreword by beat poet (and fellow part-time, secret Canadian) Jack Kerouac, changed my life as soon as I got it into my hands.

When I learned that he lived just a two-hour drive away, I knew I had to try to connect with him – but by then, Robert had also developed something of a reputation for being reclusive and prickly. Honestly, I wondered if I was going to be arrested or punched in the face when I arrived.

So it was a surprise to me that, when I arrived at his door, he and his wife, June Leaf, greeted me warmly. They invited me in, and he took the time to go through The Americans, telling the stories behind the shots. I was completely starstruck by the then-84-year-old, but somehow I managed to ask if I could make a portrait. I framed him up, then walked away from his house glowing.

The next summer I returned with that portrait, hoping to spend some more time together. What I quickly learned, though, is that Robert didn’t really want to talk about photography at all: He asked questions about my life instead and encouraged me to look at the ocean with him and let the view answer my photographic inquiries. Then I took another photo of him.

Summer after summer, I would visit with last year’s portrait, then join him in simply focusing on the quiet moments. The more I took in the simple surroundings of Robert and June Leaf’s unflashy, weathered fisherman’s house on a hill, the more I understood just how he managed to slip in and out of myriad situations to capture a true portrait of America in the 1950s: He lived simply and moved like water, with a grace that belied his years.

Two weeks ago, I visited Robert for what would be the last time. He greeted me with a big smile and asked me to sit down. He reflected: “How long have you been visiting me?” When I told him 10 years, he replied: “Long time. I am glad you came … look at this view.” For two hours, I sat with Robert and June Leaf and simply talked about life and what was going on. During the visit, I made a couple of quiet frames and just enjoyed the space and time. As I got ready to leave, I said goodbye and told Robert that I would visit him again. He turned his eyes to me – those wise eyes that were so gifted in finding raw beauty wherever he went – and simply said: “Keep looking.”

He may not have been from Cape Breton, nor from the America he so sumptuously chronicled. But that outsider lens gave him the power to always know what to look at. 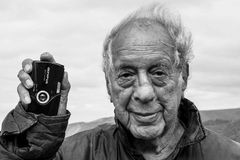