Do you remember the last time you sat with your partner in the early cool evening air, recovering from a long day’s work and smiling as you watched your children play? A Syrian man, Khalid al-Satuf, does – and he will never forget it.

On Aug. 16, just before sunset prayer, Mr. al-Satuf was sitting in the square of a compound operated by a non-governmental group for war-displaced families, near the town of Hass in Idlib governorate, in northern Syria.

After five years on the move, repeatedly uprooting his loved ones to escape the relentlessly shifting front lines, Mr. al-Satuf finally felt more settled in the displacement compound. He had returned from a day working in the fields and was relaxing with his wife. They were proudly gazing at their children: Ahmad, 2; Aya, 6; Rama, 8; and Maria, 10.

A Russian-Syrian military alliance aircraft passed overhead, bombed his shelter and destroyed his family in front of his eyes.

“We heard a warplane and suddenly I saw a red flash, heard an explosion and everything went dark. I was unconscious for a few seconds. I stood up and saw my wife and two of my daughters lying on the ground. The moment I saw them, I knew they were dead. I lost consciousness and woke up later that evening in a hospital where my relatives told me that only Rama and Ahmad had survived. … They had to take shrapnel out of Rama’s cheek. They buried the rest of my family that same night."

He had arrived in the compound in September, 2018. Then, in July of this year, a helicopter dropped a bomb on one of the buildings, killing a man and driving out all of the 80 displaced families. Mr. al-Satuf tried to find shelter elsewhere, but 1.5 million displaced people are in northwest Syria, languishing in overcrowded displacement camps, paying astronomical rent for anywhere with a spare room or squatting in overflowing schools, mosques, or fields. So he was forced to return to the displacement compound, where his family would be ripped apart two weeks later.

A colleague and I spoke with 24 witnesses to that attack – which killed at least 20 people, mostly women and children, and injured more than 50 – and also to a cameraman who filmed the horrific aftermath.

The witnesses said that no armed men or other military targets were in or near the displacement centre at the time. It is about 30 kilometres from where the Syrian government and pro-government forces were then fighting anti-government groups.

The laws of war prohibit deliberate or reckless attacks against civilians or civilian objects, such as this housing complex. All warring parties must take constant care to spare the civilian population and to do everything feasible to avoid or minimize the incidental loss of civilian life.

The presumptive war crime that took place in Hass that killed Mr. al-Satuf’s family that awful evening is one of a long list the Syrian-Russian alliance has perpetrated in Idlib over the past few years. Since April, it has escalated its military campaign there and in other parts of northwest Syria. Since then, 1,000 civilians have been killed, schools and hospitals have been attacked, and more than 400,000 people have been displaced, according to the United Nations. Those displaced have joined one million others trapped and struggling to get aid near the closed Turkish border.

The Syrian-Russian military alliance is not alone in causing massive displacement in Syria. On Oct. 9, Turkey joined the fray with its own assault on northeast Syria, displacing at least 165,000 people who joined almost 100,000 others already struggling to get assistance.

The destruction of Mr. al-Satuf’s family and thousands of others cannot be undone. But Syria and Russia should be pressed to end their unlawful attacks. Concerned countries should make clear that there will be no business as usual for Syrian and Russian officials who have intentionally or recklessly violated the laws of war. And to allow civilians to escape the continuing carnage in Idlib and elsewhere, Turkey should stop blocking asylum seekers at its border and stop deporting refugees back to Idlib.

Opinion
Syrian death and destruction: A win-win for Putin and Erdogan
October 23, 2019 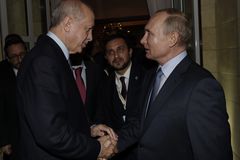 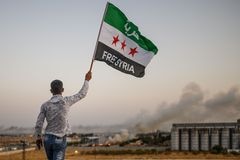