A new international poll by Ipsos with input from 18,000 respondents across 25 countries put Canada on top of the heap in terms of nations having the most “positive influence globally.” It’s a nice distinction. The United States was ranked ninth.

Though you would never know it from the amount of bellyaching you hear from the Great White North, U.S. News and World Report ranked Canada No. 1 in the world for quality of life for the fourth year in a row.

On the matter of tolerance and diversity, Canada admitted the largest number of refugees who were resettled last year and had the second-highest rate of refugees who gained citizenship.

All’s to say that when Canadian leaders speak out, as Prime Minister Justin Trudeau and Conservative Leader Andrew Scheer did this week in respect to President Donald Trump’s bigoted political outburst, they do so from a foundation that has some credibility.

In a briskly worded whack down of the President, Mr. Trudeau said, “I think the comments made were hurtful, wrong and completely unacceptable.” Such statements, he added, should not be allowed in Canada.

Given Mr. Trump’s volcanic nature, it’s a high-risk business to bluntly rebuke him like this. But silence in this case was not an option. Not for Mr. Trudeau nor for Mr. Scheer. Mr. Scheer wisely doesn’t want his Conservative Party linked with Trump’s Republicans. It’s like Stephen Harper wanting to steer clear of fellow conservative George W. Bush. Distance is even more imperative under Mr. Trump.

When I make return visits from Washington to Canada, there’s always the same question. What’s wrong with Americans? How can they tolerate this clown?

They more than tolerate him. They made him, electing him in 2016. And they sustain him, nudging his approval rating upward, no matter to what depths of depravity his actions extend.

We all had an idea what Donald Trump was like from his career before politics. What we didn’t know was how prepared the American voter was to accommodate such a person.

The latter is the most distressing aspect of the Trump presidency – how far America has not come.

This is the same country that elected Barack Obama to two straight terms prior to Mr. Trump. There was reason to suspect voter sophistication was on the rise. What a joke that expectation turned out to be.

That maybe 20 per cent might support this President is understandable. But it’s at about 45 per cent now and counting, and the loyalty is extraordinary. Mr. Trump’s latest outburst suggesting that four Democratic congresswomen of colour “go back” to their countries (even though three were born in the U.S.) produced the usual revulsion and disgust and the usual Trump double-talk. But it appears to have had no harmful impact on his support.

It’s a familiar pattern that started with Mr. Trump’s election-campaign attack on Mexican immigrants, labelling them as rapists, continuing with the release of the Access Hollywood tape in which he disparaged women, and so on.

Long ago, the United States was supposed to have moved beyond this – the bigotry, the sexism, the racism. But what the support for Mr. Trump suggests is that the underlying prejudices were never significantly eroded or ever went away. They were just dormant, there to be exploited by a demagogue who had the ability to exploit them.

A new book, American Carnage by Tim Alberta, charts how the radical right won control of the Republican Party. The author notes how in his second term, George W. Bush met with advisers and expressed his alarm about growing protectionism, isolationism and nativism among the population. “These ‘isms’ are gonna eat us alive,” Mr. Bush warned.

W. was prophetic. Though he might have mentioned the eating-alive inflicted by his own economic and military policies, it proceeds apace under Mr. Trump.

Mr. Trump has revived American bigotry and prejudices to an alarming extent. In Canada, that hasn’t happened, and isn’t about to happen. The radical right came in the form of the Reform Party’s takeover of the Progressive Conservative Party. It had electoral successes but the population, having no demagogue to arouse it (Mr. Harper being a sourpuss) and a more moderate populace, prevented the new right from excesses seen south of the border.

Protectionism, isolationism and nativism – they never came north. Our leaders, having put in place policies of diversity and inclusiveness, are well-positioned to rebuke the retrograde Trumpian “isms.” 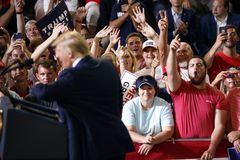 Opinion
The Democrats (and the Squad) play into Trump’s hand Subscriber content
July 18, 2019 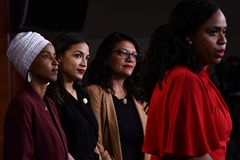