Michael Bociurkiw is a former spokesperson for the Organization for Security and Co-operation in Europe and was a member of the first team of international observers to reach the MH17 crash site.

A few days after the crash of Malaysia Airlines Flight 17 on July 17, 2014, I was wiping tears from my eyes as I watched footage from CBC News showing a cortège of black funeral cars in procession carrying the remains of some of the 298 victims.

A mix of sadness and relief overwhelmed me at that moment: Finally the bodies were in a place where they’d be treated with dignity. It was a long, long way from a few days earlier when those very same bodies lay exposed in a sunflower field in rebel-held eastern Ukraine after plummeting some 10 kilometres from the heavens.

Earlier this week, the MH17 saga was pushed further to completion when, after an agonizing wait of almost six years, dozens of relatives of the victims filed into a secure courtroom near Schiphol Airport in Amsterdam – oddly just a stone’s throw away from the runway used by the doomed airplane to begin its long journey to Kuala Lumpur – for the start of a criminal trial similar to the Lockerbie proceedings in 2000.

On trial now are one Ukrainian and three Russian nationals charged by Dutch prosecutors with mass murder and the downing of a civilian airliner.

“Many people have waited a long time for this day,” the presiding judge said at the opening of Day One – shortly before an 18-minute pause to allow the reading out of the names of the 298 victims.

With the proceedings expected to last well into 2021, the wait for closure and justice to be served will continue for quite some time. And with Russia refusing to extradite the four suspects, it’s unlikely any of them would ever spend a day behind bars, if convicted. As much as that frustrates the relatives, prosecutors insisted that the men are not immune from prosecution. “Someone who appears untouchable today may face a court tomorrow,” the Dutch team said.

The four men are being tried in absentia but one of them – Oleg Pulatov, a former lieutenant-colonel in the Russian armed forces and who’s accused of being part of the chain of command responsible for the firing of the Russian-made BUK missile that downed MH17 – is being represented by Dutch defence counsel.

My strong suspicion is the Russian government chose one of the suspects as a proxy to put forth its own debunked theories and specious arguments, and is likely footing the bill for the lawyers. Indeed, they wasted no time, arguing on Day One that Ukraine’s “remarkable” decision not to entirely close the airspace above eastern Ukraine at the time contributed to the crash. The defence team also questioned Ukraine’s membership on the joint investigation team, which gathered the evidence for the trial.

The Dutch-led investigation actually did an incredible job collecting evidence, especially considering the area where MH17 crashed is an active conflict zone. What is more, many of the witnesses that have provided testimony have been threatened and intimidated, requiring special security arrangements and for their identities to be hidden.

Russia has never admitted to the firing of the BUK missile that downed MH17. Probably the Kremlin, already under the weight of heavy sanctions for the forced annexation of Crimea and the occupation of the Donbas region of Ukraine, sees no upside in admitting guilt. At least in the case of the January, 2020, crash of Ukraine International Airlines Flight 752 (which had 57 Canadians citizens and 29 permanent residents aboard), the Iranian regime brought itself to say it had mistakenly fired a Russian-made missile into the plane.

With the possibility of Russia bankrolling the defence teams of other MH17 defendants and introducing more counterarguments and evidence – no matter how flimsy – the criminal trial may last years and interest in the outcome could wane.

The world averting its gaze from this search for justice is the worst thing that could possibly happen. Think of it this way: If the perpetrators of the downing of MH17 are not brought to justice, what’s to prevent another group of armed thugs from aiming their weapons at a civilian airliner?

A decisive judgment and harsh sentence out of the Dutch court can serve as a deterrent to non-state actors. Those of us who are air travellers or have loved ones who fly have a vested interest in our skies being kept safe.

Opinion
For the grieving countries of Flight 752, there are few tools to force Iran’s hand
January 16, 2020 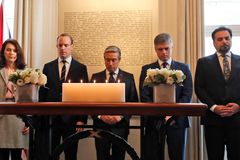