Adrian Lee is an editor in The Globe and Mail’s Opinion section.

In a land down under, the hottest-selling thing in stores is a disposable cleaning product that’s used – well, down under.

Fears around COVID-19 – now declared a pandemic, with more than 120,000 cases diagnosed in more than 100 countries over the past three months – have prompted a manic run on toilet paper around the world, but particularly so in Australia. Last week, two Sydney women were charged after a three-person brawl over TP in a grocery-store aisle. Days before, a man had to be tasered by police after allegedly choking a fellow customer and reaching for an officer’s gun in pursuit of the scarce stuff. Stores have instituted customer quotas to ensure fairness – and some supermarkets have even hired security guards specifically to enforce the roll rules.

Here in Canada, our general instinct for strait-laced order – even during a pandemic panic – has led us to line up for hours in Costcos and grocery stores just for the right to strip shelves of toilet paper down to their steel rivets. Occasionally, we’ve even deigned to spare the less fortunate a square – at mark-ups as high as $50 for a six-pack, as one B.C. man recently offered on Craigslist.

Never mind that the novel coronavirus is a respiratory illness, with few reports of associated gastrointestinal symptoms. Never mind that the supply chains for toilet paper appear sturdy, despite online hoaxes around production shortages. Never mind that neither Canada’s Health Minister nor our Chief Public Health Officer has mentioned toilet paper among the suggested supplies to stock up on, in case of the potential of a two-week quarantine. No: The coronavirus is here, and despite the eminently human and reasonable anxieties we have around the pandemic, one of our main concerns is the question of how we will wipe our butts.

TP free: Why I stopped using toilet paper (and you should, too)

The long-needed modernization happening in our bathrooms

This baseless hoarding is just the paper-thin surface problem, however. The focus on toilet paper as a must-have has exposed a broader tissue issue: A centuries-long drought of innovation around how we use our toilets.

Consider this: It was 1596 when Sir John Harington, popularly credited as the inventor of the modern water-flush toilet, published an essay on his creation. And in the more than 400 years since – a time period that has brought us such household technology as ultrasonic toothbrushes, robot vacuums, internet-connected sous-vide machines and voice-controlled lighting systems – there have been few noteworthy toilet-based tech developments. There was the invention of perforated and rolled toilet paper (1880); two buttons that can evacuate different volumes of water (1980); footstools for your stool (which really only mimic the squatting approach employed in countries around the world); and the 1988 arrival of automated flushing systems (which continue to be so easily triggered that, in the 2000s, someone actually invented a tool to block toilet sensors).

Somehow, as companies work to disrupt the nitty-gritty mundanities of our daily lives to make things as convenient as humanly possible, few resources have been devoted to improving the place where we spend a hefty percentage of our waking human lives. So despite the broader tech industry’s efforts to eliminate “friction” from our lives, we’re still anchored to the belief that literally applying friction to our rear ends is the only way to clean ourselves.

This has been the unquestioned koan for North Americans, for centuries: We go, we wipe and then we flush. We continue to blithely do number-two in the number-one way that we learned how.

People have even criticized society’s TP-based approach as early as 1534, when French satirist François Rabelais wrote: “Who his foul tail with paper wipes, shall at his ballocks leave some chips." (He recommended using a goose’s neck, which, at least, counts as fresh thinking.) North America even had to force itself to make toilet paper the norm, even when it may not have been ideal: In the 1930s, one company felt it was worth proudly boasting that its squares were “splinter-free.”

The very conceit of toilet paper feels even more ludicrous today, given the environmental issues we have turned our minds toward. Twenty-three per cent of Canada’s forest product is turned into virgin pulp, the main ingredient in non-recyclable, single-use toilet paper; producing a roll demands significant volumes of water, electricity and chemicals such as bleach, which is used to make it snow-white. Toilet paper is a reliable household-cost burden, too, and it’s a bulky item to store in our major cities’ ever-shrinking homes.

And yet, here we are, wiping in the face of logic. In fact, these have been flush times for toilet paper, even before the coronavirus crisis: Last year, 40 million tonnes of the stuff was used around the world, and the industry keeps growing, year over year.

Panic-induced necessity can be the mother of invention, however. It was an epidemic that helped spur the initial Western popularization of the toilet, after all: After tens of thousands of Britons died in wave after wave of cholera outbreaks in the 1800s, English doctor John Snow’s discovery that the disease was carried in waste-contaminated drinking water eventually prompted the creation of a sewer system in London, and the ensuing household-toilet revolution.

So now is the time to innovate beyond the entrenched belief that the definition of essentials “certainly includes toilet paper," as Temple University professor Frank Farley fretted to CNN. “After all, if we run out of [toilet paper], what do we replace it with?”

Bidets – or at least, the principle of using a gentle stream of clean water to wash your rear – have long been commonplace outside of North America. In southern Europe, particularly in Italy and Spain, large separate-unit bidets are commonplace; in India, lotas and hoses serve the same purpose. While no peer-reviewed study has declared that water sprays offer an objectively superior clean, one such study does say that pruritus ani – the medical name for the condition that afflicts as much as 5 per cent of the general population and is best described by that Rabelais line about leftover, itchy “chips” – is aggravated by toilet-paper use.

Bidet use no longer requires a space-eating separate unit or an expensive new feature-rich toilet, either. Following in the footsteps of Japanese fancy-toilet leader Toto, companies such as Tushy have found a North American market for bidets that can attach onto an existing toilet and connect directly to its clean-water tank to spray through an often self-cleaning nozzle. As long as they’re properly cleaned and disinfected, these attachments save money on toilet paper over time, are more environmentally friendly – and vastly reduce the need for toilet paper, generally and during an epidemic.

Yet here we are, swaddled by the gifts of modernity, continuing to swipe at our dirtiest parts with our pathogen-transmitting hands protected only by a few measly scraps of pulp, merely because of the tyranny of convention. And now, toilet paper is apparently so deeply ingrained in our lives that we’re willing to stand in line just for the right to buy these wasteful smearing-papers, instead of breaking down society’s pearl-clutching aversion for talking directly and productively about an act we all do (ideally) every day.

Indeed, Harington himself acknowledged this stigma when he gave his 1596 (non-digestive) tract on his toilet invention the title “A New Discourse upon a Stale Subject”. It took until Alfred Hitchcock’s 1960 movie Psycho for U.S. filmgoers to even see a scene in which a toilet was flushed. In 2006, Oprah Winfrey openly discussed her stool health on her show, shocking her viewers with this revelation: Even Oprah poops. But it’s undignified to think or talk about it more than we have to, the feeling goes – as if being tasered, getting into a brawl or waiting in line for hours in the pursuit of paper with which to splotch one’s bottom offers up vast reservoirs of dignity.

If the dystopian-feeling events in Australia and beyond are proof of nothing else, it’s this: Before North Americans hoard toilet paper as if the end times are near, we should at least consider saying g’day to the bidet.

The long-needed modernization happening in our bathrooms
September 30, 2019 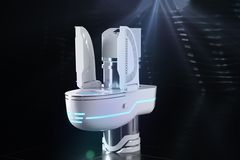