François Legault was nowhere in sight at last week’s giant climate march in Montreal. Instead, the Quebec Premier addressed an open letter to the province’s youth in advance of the protest in which he praised their passion and insisted that he had heard their cry. But he stopped short of endorsing their demands and took a pass on walking with them.

Mr. Legault remains obsessed with erasing the wealth deficit between his province and Ontario. He is willing to pay lip service to environmental concerns only to the extent to which it advances his goal of selling more of Quebec’s hydroelectricity beyond the province’s borders. His opposition to the Energy East oil pipeline should be read not as an environmental line in the sand, but as a negotiating position. “What’s in it for Quebec?” remains his governing principle.

Perhaps he knows something that Quebec’s Montreal-based media elites don’t. They continue to raise red flags about Mr. Legault’s apparent tone deafness on the climate file. Yet, after a year in power, Mr. Legault is more popular, and powerful, than ever. According to a weekend Léger Marketing poll in Le Journal de Montréal, almost three-quarters of francophone Quebeckers are satisfied with his government. Over all, despite weak support among non-francophones, two-thirds of Quebec voters expressed satisfaction with its performance.

No Quebec government in recent history has achieved anything close to that approval rating this deep into its mandate. Most had already been caught on one of the many shoals of Quebec’s always tricky politics. Mr. Legault seems to have transcended all the habitual traps faced by predecessors. As one Journal de Montréal columnist recently put it, he levitates.

The CAQ Premier appears to have found a sweet spot in Quebec politics, combining both strong nationalist credentials and a reputation for economic competency. It helps that the opposition Liberals and Parti Québécois remain leaderless, and hopelessly ineffective, and that the province’s economy has been on a roll. The CAQ government also inherited hefty budget surpluses that it hardly knows what do to with. It’s a nice problem to have.

Yet, it is in his ability to articulate an almost nostalgic notion of Quebec nationalism that Mr. Legault has most succeeded in winning over his province’s francophone majority. It’s almost as if the Quiet Revolution never happened and Mr. Legault merely picked up where Maurice Duplessis left off in 1959. He lords over his party in Duplessisiste fashion and issues decrees to the rest of Canada about staying out of his province’s business with similar authority.

Although he may still be a Quebec sovereigntist at heart – he goes to almost comical lengths to avoid the question – Mr. Legault seems to have taken a Duplessis approach to Quebec-Canada relations that might best be summed up as: Don’t bother me and I won’t bother you. He is out neither to provoke English Canada nor seek a greater role for Quebec in the federation.

Bill 21, an act respecting the laicity of the state, is his first-year crowning achievement. The law adopted in June that prohibits provincial employees in a position of authority from wearing religious symbols is maligned in the rest of Canada and has created deep angst among Quebec’s non-francophone and Muslim minorities. Yet, it is overwhelmingly popular among the province’s francophone majority, which sees the legislation as an expression of its collective will.

Mr. Legault credits the law for restoring francophone Quebeckers’ pride in their identity. While three previous governments fell flat on their face in attempting to neutralize the toxic secularism file, Mr. Legault and his 32-year-old superminister Simon Jolin-Barrette took the bull by the horns and seemingly wrestled it to the ground in no time at all. The duo gets high marks from francophones for doing what they said they would, in lickety-split fashion.

It could all still blow up in Mr. Legault’s face if courts strike down the law, in spite of the CAQ government’s attempt to shield it from such an outcome by invoking the Constitution’s notwithstanding clause. Politically speaking, the CAQ Premier has moved on from Bill 21 and is readying the rest of his agenda to make Quebec proud again. But fate may have other plans. 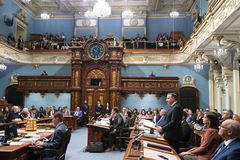 François Legault lays out list of demands to boost Quebec’s power at expense of Ottawa
September 18, 2019 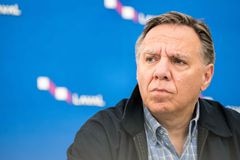