All politics is local. Joe Biden is campaigning on his plan for a clean energy revolution and won’t accept donations from oil and gas executives. But in a nod to his working-class Pennsylvania roots, the Democratic presidential nominee also says he won’t try to halt hydraulic fracturing activity in the United States – as much as many left-of-centre voters wish he would.

What likely contributes to his thinking on the controversial topic is that the place where he was born and went to elementary school is second only to Texas when it comes to American natural gas production, and in Pennsylvania, there is a clear correlation between frac jobs and employment. Perhaps even more importantly, the state is a key battleground in the presidential race.

The Trump campaign has been able to use Mr. Biden’s sometimes slipshod statements on issues related to the oil and gas sector, including on fracking, against him. But if Mr. Biden’s take on energy matters is sometimes confusing, one thing is crystal clear: If he wins the White House, Alberta’s bet on the Keystone XL pipeline is in trouble.

When it comes to the long-stalled project, Albertans have a direct stake. In March, the province’s United Conservative government announced it had signed a deal with Calgary-based pipeline builder and operator TC Energy Corp., and had taken a US$1.1-billion ownership share in the US$11.5-billion pipeline. The province also committed to billions more in loan guarantees, if Keystone XL construction continues next year.

In March, Jason Kenney might have had reason to hope the pipeline – which would link a North American oil transportation system and create a new route to refineries on the U.S. Gulf Coast – would be completed. U.S. President Donald Trump had revived hopes for the project by issuing a presidential permit, and Mr. Biden hadn’t yet delineated his position.

The Alberta Premier framed his government’s move to reduce the risk exposure for TC Energy as ultimately about winning a much better price for land-locked Canadian oil. He also tried to make the case to Americans, saying Keystone XL would create jobs south of the border, and be a significant contribution to a continental energy security strategy that would make American refineries and consumers less reliant on OPEC countries such as Saudi Arabia for oil.

But in May, the risk to Alberta’s already shaky finances became clear as Mr. Biden called the “tar sands” a “very high pollutant," and his campaign said he would rescind approval for the pipeline. If he wins the White House, Mr. Biden can revoke the permit. (The same month, a U.S. federal court ruling said the project needed a more thorough vetting for its impact on water resources and endangered species, effectively halting construction in the United States until that process is complete).

It’s easier for an American politician to condemn a pipeline project originating in Canada, long in the crosshairs of environmental groups, than to run on policies that will cost existing jobs in Ohio or New Mexico. But it’s a quandary for Alberta. Four out of five barrels of Canadian oil are shipped south of the border. Goldman Sachs said in a research note that the lack of cross-border pipeline capacity will be a long-term hurdle for Canadian production, could result in lower prices for Canadian oil producers, and will likely lead to more Canadian oil being moved by rail and barge.

James Rajotte, the former Conservative MP turned Alberta envoy, is lobbying hard for Keystone XL in Washington, making sure lawmakers there are aware of Canadian oil producer commitments to net-zero emissions by 2050, and highlighting plans for an Indigenous business group to have a stake in the project.

However, Joseph Doucet, dean of the University of Alberta’s School of Business, believes Mr. Biden will follow through with his promise to kill the project. “If you read the very clear political tea leaves of the Democratic party, he’s not going to back off on that," he said.

“That should focus our attention on the Trans Mountain expansion, and other things we need to do."

The presidential election result and what it means for the oil and gas industry is not completely binary. Mr. Trump is clearly a supporter of the sector, and his administration has made it easier for the industry to operate with measures such as eased methane requirements. However, Goldman Sachs also noted that the impact of such policies remaining in place, should he be re-elected, would be of modest benefit to the industry given the shift by investors to incorporate environmental metrics. The investment bank also stated that while the Biden energy plan would eventually hasten the decline of fossil fuel usage, its near-term effect might be net neutral-to-positive on oil and gas demand: “In gas, because of increased power demand in the face of still declining coal-fired capacity. For oil, because of the likely negligible impact in coming years of the proposed higher electric vehicle penetration and fuel standards.”

It is also possible that Canada plays a role in supplying more oil to the U.S. as shale production drops off in the medium term, driven in part by bankruptcies among a host of American industry players.

Mr. Biden’s take on fracking can be construed as cynical politicking, but it at least acknowledges the economic pain that some are likely to suffer in the process of a global energy transition. There is a divide between the people who mainly consume energy, and those communities such as small-town Pennsylvania – or Alberta – where people get the stuff out of the ground. And as momentum builds in both countries for fossil fuel divestment, the toll that will take on some communities is an underrepresented topic.

“I have seen a reluctance to be honest about this issue," said Arvind Ravikumar, an energy engineering professor at the Harrisburg University of Science and Technology, whose academic work starts from the premise that climate change is the single biggest existential threat to humanity.

“Being honest about that is the way to start.” 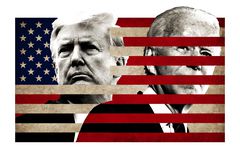