Moira Dann is a writer and former Globe and Mail editor now living in Victoria; she is currently writing a correspondence-based biography of George Brown and his family.

George Brown often gets short shrift as a Father of Confederation: Some people don’t even know he was the founder of The Globe, let alone a founder of the country. (“George Brown? Didn’t he start the college?”)

True, Brown wasn’t the charismatic lightning rod his confrère and rival John A. Macdonald was, nor was he as ready to dance and sing and flirt and play his own compositions on the piano, as was his Quebec frenemy, George-Étienne Cartier. Brown was a tall, mutton-chopped, dour-looking, literal-minded, earnest journalist and politician. Still, he was the most forward-looking of the lot.

Brown’s motivators for political change were progress and fairness. He came to Toronto from Scotland in 1843 via a short, five-year sojourn in New York working in dry goods and publishing. His work writing about politics for the British Chronicle, the paper started in New York by his father, led to a group of Toronto Free Kirk Presbyterians offering to sponsor that publication if Brown father and son brought it north. Once in Canada, the Chronicle became The Banner, “a useful Family Paper.”

It wasn’t long before Brown, defending the principle of the government’s responsibility to Parliament, was haranguing Governor-General Charles Metcalfe about public-service appointments made without the approval of the elected representatives. Brown soon enough made the leap from journalism to politics. He was instigator of the Great (Brown/Macdonald/Cartier) Coalition of 1864 that, seeing how the addition of citizens from the Maritimes could pay off for both Canada East (Quebec) and Canada West (Ontario) by increasing and diversifying voters (helping to end the electoral deadlock that stymied progress), sat down in Charlottetown to discuss Confederation with Maritime leaders. (Rep-by-pop was Brown’s mantra.)

But he was back wearing his journalist’s hat in 1867, writing a 9,000-word front-page editorial for The Globe’s July 1 edition when Canada’s Confederation became a political reality.

While still publishing and writing for political-reform-minded Presbyterian church publication The Banner, Brown had foreseen a market trend: He anticipated the desire for (and the money-making potential of) a good newspaper directed less toward partisan believers and more at a general reader, a paper with a strong point of view and attempting a national perspective. He started The Globe on March 5, 1844, before The New York Times (a paper with a similar vision) appeared as The New York Daily Times Sept. 18, 1851.

After Brown started The Globe – it merged, in 1936, with the Mail and Empire, to become the newspaper that you are reading today – he was able to print and distribute it widely to extol Confederation because of some forethought: He had started investing in new technology. Just two months after starting The Globe using a hand press that printed 200 copies an hour, he went to New York and purchased a Hoe rotary press that could produce 1,250 copies an hour. His was the first one used in Upper Canada. He also made a deal with a rival publication, the British Colonist, to share the cost of using the telegraph to bring news from New York and Montreal.

The Globe first appeared weekly, then twice a week in 1846, then three times, and by October, 1853, it was a daily. Brown also was the first to publish full-length novels in instalments in his paper; the first book he serialized was Dombey and Son by Charles Dickens in 1846.

Brown also used the new rotary press technology to set up a printing operation. He tried to expand the Globe’s reach by establishing the Western Globe in 1845 to serve the southwestern parts of Canada West, with an office in London, Ont.

As clever as Brown was when it came to evolving printing technology, he missed the boat when it came to the telephone. “Sound telegraphy” inventor Alexander Graham Bell’s father was Brown’s neighbour at his Bow Park home near Brantford in the 1870s. Bell approached him about investing in his invention. Brown advanced him $600 and agreed to help with obtaining a patent in England; Bell offered Brown a half-interest in the foreign patents. Brown’s research overseas indicated Bell’s invention would probably not gain any traction outside the United States, and so let his interest lapse.

One thing Brown never allowed to lapse was his dedication to religious liberty, civil rights and the abolition of slavery. Brown was on the executive of the Anti-Slavery Society of Canada, speaking out eloquently against American slavery in both Canada and the United States. He was also part of the Elgin Association, which bought land for and helped settle slaves who had escaped with nothing across the border into Canada.

Brown was also a vocal advocate of prison reform. In 1848, he was named to a commission looking into the penitentiary near Kingston, Ont. It revealed corrupt leadership and the extent of cruelty, punishment and abuse of prisoners; records showed the rate of punishments of inmates increased from 750 in 1843, to 3445 in 1846, and 6003 in 1847 (with little growth in the number of prisoners). He wrote the commission’s report that suggested plans then considered revolutionary, such as a great reduction in corporal punishment, housing juvenile offenders separately and formulating a plan for each prisoner when released, to reduce repeat offenders.

It’s to Brown’s credit that he foresaw the prison system’s future problems; it’s to our shame that it’s taken more than 150 years to pass a bill that seeks limits on solitary confinement.

Brown often complained that the work he did as a nation builder got in the way of the work he most loved: being husband to Anne and father to Margaret (Maggie), Catherine Edith (Oda) and George.

The last quarter of the 19th century was edging toward some kinds of enlightenment, but women’s rights weren’t paramount (Indigenous rights weren’t even considered) in a society built on a belief in separate spheres of influence. Women ruled the world of home and family (sort of), and men held sway in business, education and politics and were household heads.

Marriage later in life (he was almost 44 when he tied the knot) changed his point of view on many things. His political colleague Oliver Mowat said Brown’s marriage to Anne Nelson led to his “… becoming an increasingly gentle, kind and considerate person.” In the midst of nation creation, he was known to flash baby pictures at social events.

He wrote to his wife, Anne, while he was at the Charlottetown Conference: “What a darling little body our Maggie must be. I do so long to see her. I had shown her photograph at Charlottetown to Mrs. Pope with whom I was staying there. She coaxed me on Saturday night to show it to the other ladies. They were all perfectly charmed & declared there never was so beautiful a photograph before. In this I entirely agree with them.”

The family atmosphere created by Brown and his wife encouraged the education of the girls, Margaret and Catherine; their mother was well-read and educated. Before Canadian women had the vote, when wives and daughters had no rights, the girls were two of the first women to graduate from the University of Toronto in 1885, Margaret receiving the Gold Medal for Modern Languages. Sadly, their father wasn’t there to see them graduate, as he died in 1880 after being shot by an angry Globe employee and the wound turning gangrenous.

Brown’s political and genetic legacy lives on in Canadian provincial politics. Peter Bevan-Baker, the current leader of the Prince Edward Island opposition Green party, is Brown’s great-great grandson. Mr. Bevan-Baker is descended from Brown’s eldest daughter, Maggie, who returned to Scotland along with her mother, Anne, and the rest of the family in the mid-1880s. Hence Mr. Bevan-Baker was born in Scotland, studied dentistry there and came to Newfoundland in 1985 for what was to be a short-term dentistry job. But he met a woman (another Ann!), fell in love and chose to stay.

I would love to be the one to tell Brown that after his death and his family’s return to Scotland, his great-great grandson (by way of “darling wee” Maggie) came back to Canada. This scion continues the Brown family progressive interests in the Cradle of Confederation.

So why think about George Brown on this Canada Day? When I started to look into this man for a documentary I did about the Mothers of Confederation, I initially didn’t like him much because of some things he said about Quebec (my birthplace) and Catholics (my birth faith), but now he’s one of my favourite fathers: Further study revealed Brown hated that the church told people in Quebec how to vote. More reading showed me the passion in his marriage and the influence of his mother and his sisters and then his wonderful wife, Anne, and daughters on his evolving world view.

Memories of the people present for Canada’s beginnings can teach us a great deal. Sometimes looking back helps you reconsider and reframe the present, so you can see different possibilities for the future. 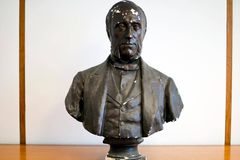