Two giants among American Republicans are about to move on. The patrician former president George Herbert Walker Bush and the gallant senator John McCain are not long for these pastures. Both men had setbacks and made their share of wrong turns. But they will leave high on the party’s honour roll as leaders whose public service was laced with noble intent more than ideological prejudice.

They will depart no doubt disillusioned over the state of their party. Mr. McCain has just put out a book called The Restless Wave. In describing himself, he writes “Not a Tea Party Republican. Not a Breitbart Republican. Not a talk radio or Fox News Republican.” None of those. And not, he adds, an isolationist Republican or a “protectionist, immigrant-bashing, scapegoating” one. Mr. Bush would characterize his conservatism in a similar way.

They must wonder now if the party they knew will ever return. One of the unnerving aspects of hard right populist formations is that, once in power, they become determined to remain there. Zealotry gives way to authoritarian impulse, to conspiracy theories, to a willingness to trample over constitutional and democratic norms – all of which is in evidence in today’s White House.

The overthrow of Bush-McCain-styled conservatism began with the rightward push and hyper-partisanship of the Newt Gingrich revolution of the 1990s – his so-called Contract with America. He faded, but the rabid tendencies ratcheted up with the formation a decade later of the Tea Party. This movement gave way to the tribalism that came with Donald Trump’s hijacking of the party.

The trajectory has turned today’s Republican Party into a retrograde force, an embarrassment not only for the likes of Mr. Bush and Mr. McCain but conservatives everywhere, Canada included.

Has the GOP ever been so reactionary on so many fronts? Consider 10 examples:

There’s no need to wonder why traditional conservatives shudder at what their party has become. But don’t blame just the party or Mr. Trump. It’s what the American people – half the population or thereabouts – want, as demonstrated by their election and support of this President. Two-and-a-half centuries after the founding of the country, Americans are aligned with these values.

Two solitudes, you might say, characterize the country’s political culture. The medievalists and the modernists. The latter are uninspiringly represented by the blurry Democrats, a party which, for all its problems, has not hardened into ideological concrete.

On the latter note, the Republican trajectory shows no let-up. If Mr. Trump were to be dethroned, two leading candidates to replace him would be Mike Pence and Ted Cruz. Neither resides far from the party’s cave-dwelling precincts.

It’s not only on policy where the hard-right Republican turn has taken place but additionally in respect to tactics – tactics that border on repressive. We’ve seen this with Mr. Trump’s attempted manhandling of the Justice Department and intelligence agencies. We saw it in his appointment of a short-lived commission to investigate electoral fraud. He did this even though he won the election. In the event of a loss, there’s no telling how far he would go and how far his tribal supporters would enthusiastically allow him to go.

The degree to which the norms have shifted from the conservatism of Mr. Bush and Mr. McCain is remarkable. It would be welcoming to know there is an end in sight. 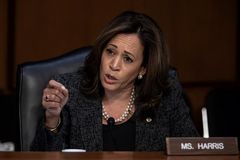