Lawrence MartinPublic affairs columnist
Washington
Special to The Globe and Mail
Published May 31, 2018 Updated May 31, 2018
For Subscribers

U.S. President Donald Trump promised Prime Minister Justin Trudeau he would not impose steel and aluminum tariffs on Canada. It happened not just once over the last few months but on three separate occasions, Canadian officials say.

So much for presidential promises. So much for the idea that playing nice with the mercurial man works. Canada got slammed with the tariffs anyway. It didn’t matter that the United States has a large surplus in steel trade with Canada. It didn’t matter that the national security rationale for the tariffs, as Prime Minister Justin Trudeau rightly pointed out, is bogus. The attempts to be reasonable, to temper the retrograde Hoover-era protectionists in Washington failed.

On their own, Mr. Trump’s steel and aluminum tariffs are serious enough. Ninety per cent of Canada’s steel exports go to the United States. But the reverberating impact, the potential collateral damage, is worse. The continent now appears headed for commercial turmoil. A brutal extended trade war is well possible.

The Trudeau government couldn’t sit idly by in the face of Mr. Trump’s aggression. Mr. Trudeau has played kid-gloves diplomat with nothing in return from this President for long enough. For self-respect and for economic justice, he had to hit back hard and his retaliatory measures are strong.

Of the Americans, the Prime Minister said, “we have to believe that at some point their common sense will prevail.”

But with the Trump administration you can never count on common sense. Mr. Trump, whose protectionist views appear to have hardened lately, has another threat looming; the one to impose heavy duties on imports of automobiles and trucks. In the face of the Canadian retaliatory measures he could well move on them, dramatically heightening tensions.

There’s also the question of the fate of the NAFTA renegotiation. It was already on perilous ground with one deadline to present a new deal to Congress already missed. The steel tariff imbroglio could be the nail in the coffin. No deal is likely now before the election of a new Congress in the fall. The new Congress could have a Democratic majority thus necessitating a new beginning.

In the meantime, given that the NAFTA renegotiation has not proceeded as he wished, Mr. Trump could well carry out his initial campaign threat to torpedo the accord.

Canada, the United States and Mexico were close to an agreement on a new deal in the auto trade sector which was a high Trump priority. Washington and Ottawa, officials say, had things quite well worked out but U.S. and Mexican negotiators couldn’t come to terms. Mexican elections are a month away and there’s a good possibility that a new government with different trade priorities could be in place.

The negotiating dynamic has placed Ottawa in a hostage-like position to Mr. Trump’s whims and to decisions in Mexico. The latter are where Mr. Trump’s bigger issues lie. Canada and the United States however are still far apart on several other NAFTA issues. In meetings with Foreign Affairs Minister Chrystia Freeland this week, U.S. Trade Representative Bob Lighthizer was insistent on a sunset clause for any new NAFTA deal, a proposal Ottawa strongly opposes.

With the steel dispute eruption and NAFTA on the ropes, the prospect of an eventual scenario in which a new bilateral trade pact has to be worked out with Ottawa and Washington heightens.

Never mind the fact that the United States enjoys an overwhelming military advantage and a defence budget leagues ahead of all countries. Never mind that with respect to Canada, it has the steel trade surplus and that the two countries have been defence partners for a century and recently celebrated the 60th anniversary of NORAD (The North American Aerospace Defense Command.)

In announcing the new tariffs, Commerce Secretary Wilbur Ross said that, “Without a strong economy, you can’t have a strong national security.” The American economy with a remarkably low unemployment rate of 3.9 per cent, is the strongest it has been in a long time.

As Thomas Donohue, president of the U.S. Chamber of Commerce says of the tariffs, “This isn’t about national security. This administration has already signalled its true objective is to leverage this tariff threat in trade negotiations…”

The leveraging is being applied – and with potentially havoc-bearing consequences.

Opinion
Ahead of G7 summit, will Trudeau sidestep the many potential pitfalls?
May 31, 2018 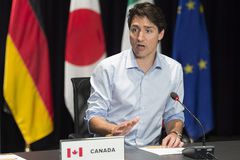 Opinion
In NAFTA talks, Canada and Mexico need to stick together
May 23, 2018