There is likely no one in Canada more upset about the result of the federal election than Alberta Premier Jason Kenney. He staked a lot on the outcome.

Mr. Kenney spent many months leading up to the vote – and indeed well before that, too – demonizing Justin Trudeau and the Liberal government at every opportunity. Sometimes, the language was personal and downright nasty. It was also highly inflammatory, raising the spectre of western separatism if Mr. Trudeau’s government were re-elected.

But it went beyond that.

In his rise to the top political job in Alberta, Mr. Kenney became one of the loudest and most influential conservative voices in the country. He counted Conservative Party Leader Andrew Scheer as a friend. Mr. Scheer considered Mr. Kenney a mentor.

When it came time to unveil the Conservative Party platform, it was little surprise that the environmental strategy effectively riffed off the one Mr. Kenney was instituting in his province: no carbon tax. No meaningful measures to reduce emissions. Hope technology saves the day. It was a scorched-earth climate plan.

And it was the biggest strategic blunder of the campaign.

The Conservatives and Mr. Scheer need to own their loss, but so does Mr. Kenney. The fact is, the vast majority of the country voted for parties with strong climate policies. Even if Mr. Scheer and his party had managed to eke out a small victory, got a few more seats than the Liberals and tried to govern, you must ask yourself how that would have looked.

How would Mr. Scheer have pushed forward his signature plans for more pipelines, east and west, with absolutely no support among the other parties for such measures? If the Conservatives continue to listen to voices in their party advocating for policies so fundamentally misaligned with 21st-century realities, they are destined for the dustbin of history.

Which brings us back to Mr. Kenney.

He announced this week that he is convening a panel that will travel the province to hear from the public on how Alberta can get a fairer deal in Confederation. He conceded that the meetings could turn into town halls for separatism. But the Premier believes people need to be heard, and to vent. (He was quick to add that he doesn’t believe separatism is the answer.)

My suspicion is these hearings are more about making sure the rest of Canada gets a taste of the anger in the province than it is about mining for new ideas. One can already imagine the cameras rolling as speaker after speaker talks (or rages) about how much better off Alberta would be if it went it alone. There will also be plenty of opportunities for Trudeau bashing – a favourite sport.

It will all make dramatic fodder for national newscasts. One can only guess how much investment it will scare off.

At the end of it all will be a report that, I suspect, offers few worthwhile thoughts about how Alberta can get a better deal. Rather, the entire exercise may best be remembered for the troubling image of the province it portrayed.

Mr. Kenney can continue to foment separatist sentiment in Alberta for cheap partisan gain, but that would be a stunning lack of leadership on his part. I’m not sure what he hopes to gain by continually denouncing a Prime Minister who is actually trying to build a pipeline he so desperately wants. The Liberals, let’s not forget, spent $4.5-billion to buy the Trans-Mountain pipeline and the rights to its expansion. Barring a purchase by some other entity, it will cost Ottawa an additional $10-billion (at least) to finance that expansion.

That’s a hell of an investment in a province.

But Mr. Kenney wants everything his way. He wants the carbon tax dropped. He wants tougher new environmental rules for resource development ripped up. He wants the government to renege on a tanker ban it campaigned on in 2015. He wants it all. And if he doesn’t get it, well, don’t blame him if separatist tensions continue to rise. Nudge, nudge, wink, wink.

The Alberta Premier invoked the name of a predecessor in discussing the province’s dilemma: Peter Lougheed. Oh, if only he were around today to advise Mr. Kenney.

Mr. Lougheed was a fierce defender of his province’s interests, but never in a small-minded or malicious way. And he would never have put his own partisan interests ahead of those of his province. 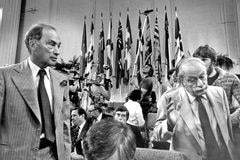