Much recent discussion about Defence Minister Harjit Sajjan has focused on his handling of sexual misconduct allegations in the Canadian Armed Forces. But today, on National Peacekeepers’ Day, it’s also important to evaluate how well he has delivered on his government’s promise to re-engage in UN peacekeeping.

In 2015, when Mr. Sajjan was sworn in, the prospects for a Canadian return to peacekeeping looked bright. The Liberals had prominently featured such a return in their campaign platform. And on election night, Prime Minister Justin Trudeau declared: “Canada is back.” For those who remembered that Canada had been a major provider of peacekeepers to the United Nations, this was a time for optimism and hope.

Even more promising, at the UN Peacekeeping Defence Ministerial in London in 2016, Mr. Sajjan pledged that Canada would provide as many as 600 military personnel for UN peacekeeping. He hosted the next ministerial in Vancouver in 2017, and Canada bolstered its initial pledge with the promise to provide a quick reaction force, or QRF, to the United Nations.

Around the same time, Canada offered to provide a force commander to lead the mission in Mali, and though the UN held the position open for two months, the offer fell through because of ministerial inaction.

For decades, Canada had provided about a thousand peacekeeping soldiers per year, reaching a high of 3,300 in 1993, around which time Canada was working to bring peace to wartorn areas of the world such as Cambodia, Bosnia and Mozambique. But the numbers have dwindled in recent years; in fact, the Trudeau government’s average monthly contribution has been one-third smaller than that of the Harper government.

Canada did contribute a useful aviation service to the Mali mission in 2018 and 2019, but it was just for one year. Germany and the Netherlands, by contrast, provided multiyear aerial service and also put boots on the ground.

At UN headquarters, the expression “The Canadians are coming!” was first viewed in a positive sense – a return to major peacekeeping contributions. But soon it became a grimly humorous statement: Canadian ministers and government personnel would come to New York with lots of questions, exploring options, taking valuable time from UN staff, but in the end Canada would provide no forces for peacekeeping.

Sending Canadian officers to the UN’s military affairs branch in New York would have given Canada excellent opportunities to learn about contemporary UN planning, procedures and priorities. But in the past six years no Canadian officer has held a post in the office, where some 50 other countries contribute.

It’s difficult to understand the disconnect between promise and reality.

Mr. Sajjan repeated over and over that important decisions such as deploying peacekeepers required careful consideration. After many years of this mantra, it is apparent that his approach has caused paralysis by analysis or, worse still, has served as political cover for doing nothing.

Currently, Canada provides about 27 military personnel, a fraction of a per cent of UN peacekeepers and a far cry from the 10 per cent it provided for decades. Furthermore, only five military women currently serve as UN peacekeepers.

For a government that made a vocal effort to promote women in peacekeeping, this is astonishing. While the Elsie Initiative, spearheaded by Global Affairs Canada, gains traction in supporting the deployment of women peacekeepers from other countries, Canada’s small-scale contribution sets a poor example.

The rhetoric remains lofty, but Canada has yet to match word with deed. Mr. Sajjan and the federal government have even placed new impediments to deployment, such as imposing a condition on the UN that several other countries must be ready for successive rotations after any Canadian deployment.

The Defence Minister has clearly defaulted on Canada’s peacekeeping promises and has proven to be a laggard, not a leader. It is no wonder that Canada lost its bid last year for a seat on the UN Security Council. Mr. Sajjan has not followed his own advice to the council in 2018: “The time for change is now and we must be bold.” The UN urgently needs Canadian peacekeepers who have served with such distinction in the past. When will the country put words into action? 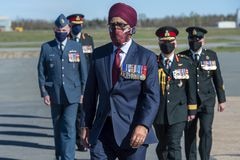 Canada’s peacekeeping contribution at lowest level in more than 60 years
May 22, 2020 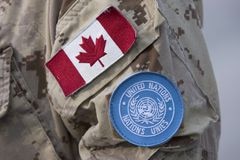 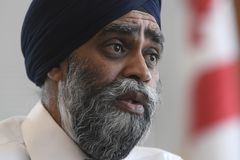