Heroes of the north

What Rita Leistner’s photographs of tree planters reveal about Canada

Words and photographs by Rita Leistner

Widely considered a rite of passage and a uniquely Canadian coming-of-age experience, tree planting is back-breaking, piecework paid labour – a hybrid combination of high-intensity sport and industrial labour that requires both technical finesse and remarkable physical and mental endurance. An experienced worker can plant more than 2,000 trees in a single day, burning up to 10,000 calories in the process.

The Tree Planters, photographed in the aftermath of logging, forest fires and insect infestations, is a series of unstaged live-action portraits of the men and women reforesting Canada’s boreal zone by hand and shovel, one tree at a time. In 2016 and 2017, I was “embedded” in the planting camps of Coast Range Contracting, one of a number of tree-planting businesses that vie for highly competitive contracts from logging companies and the Canadian government. 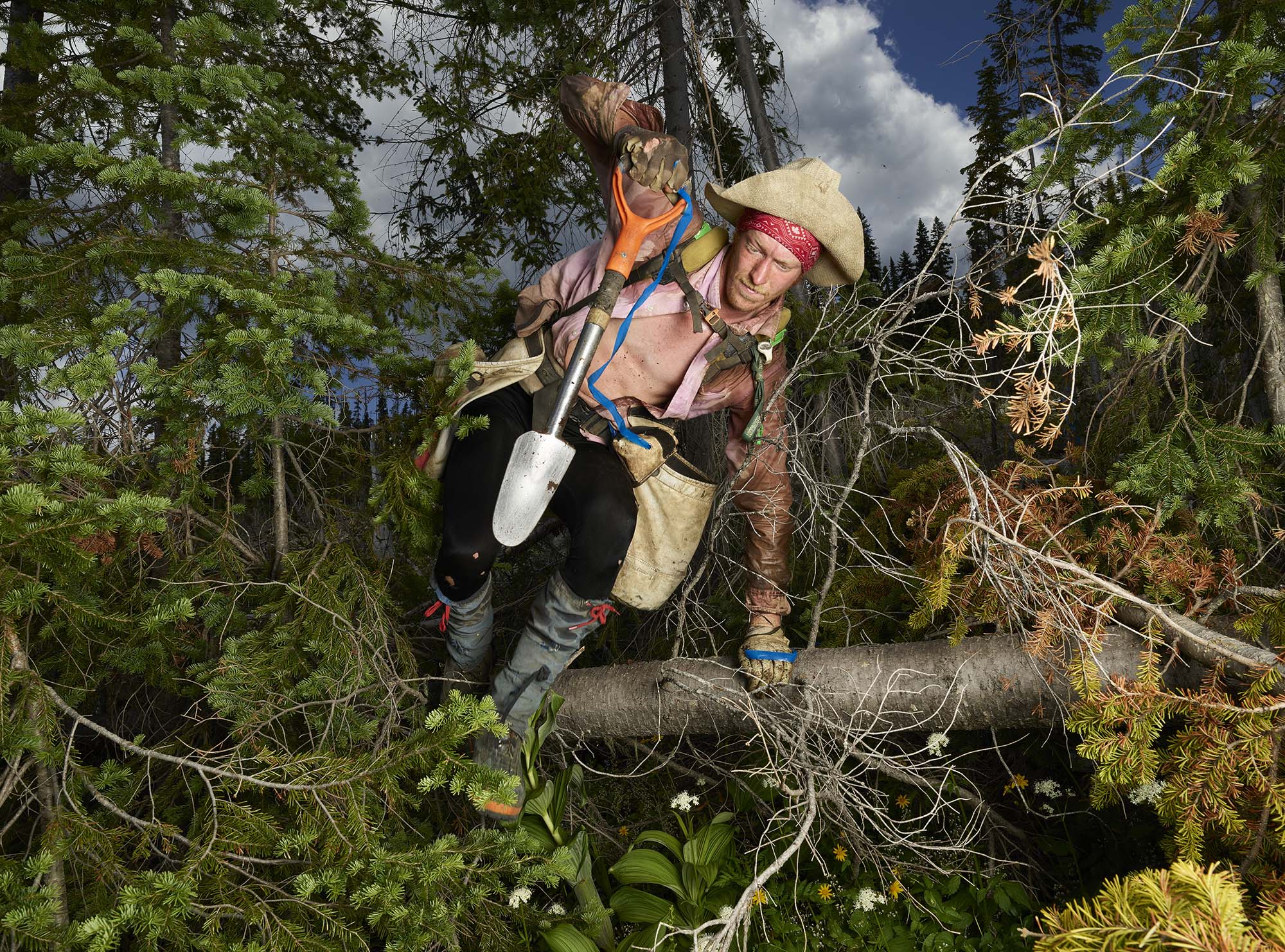 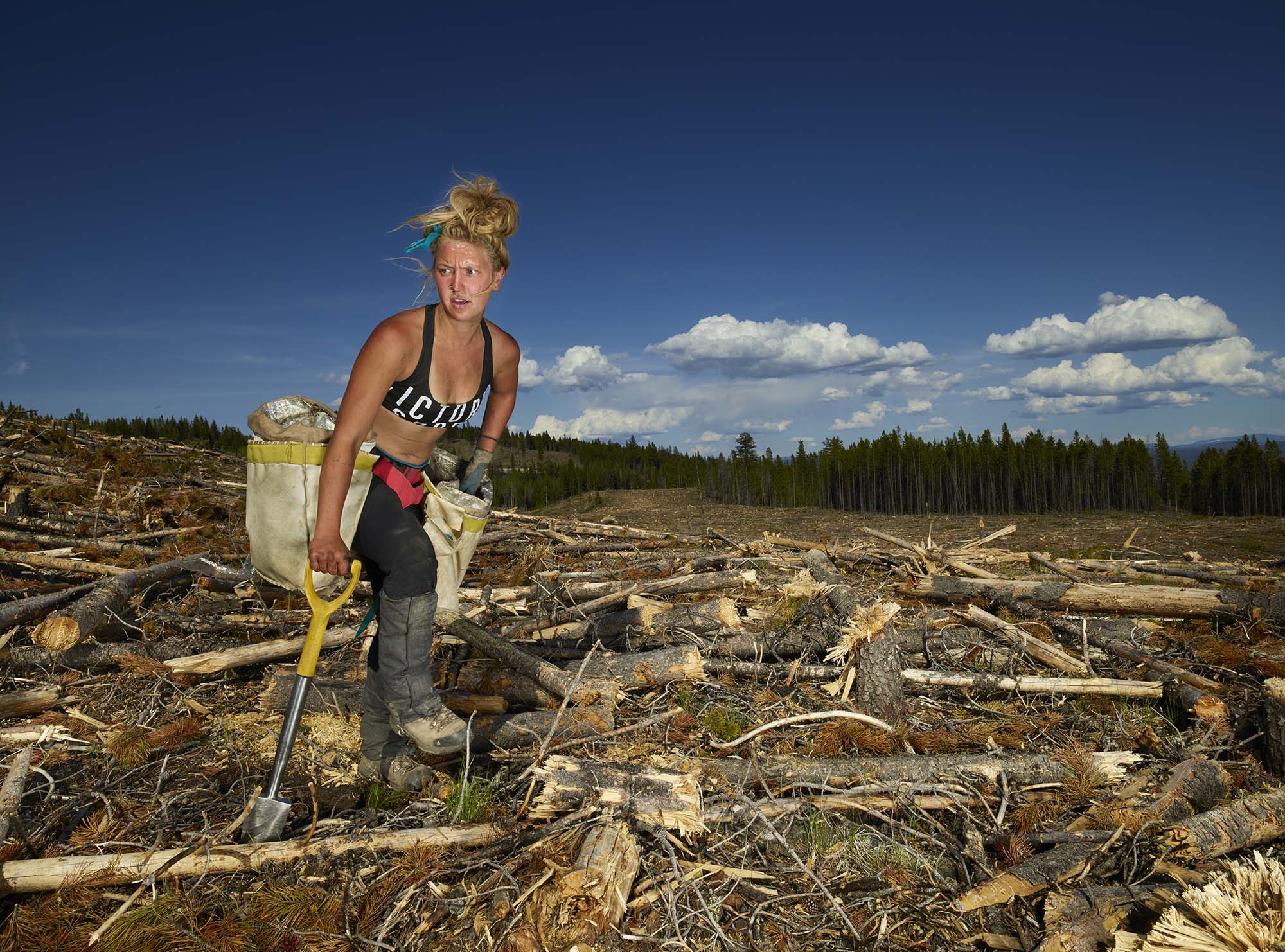 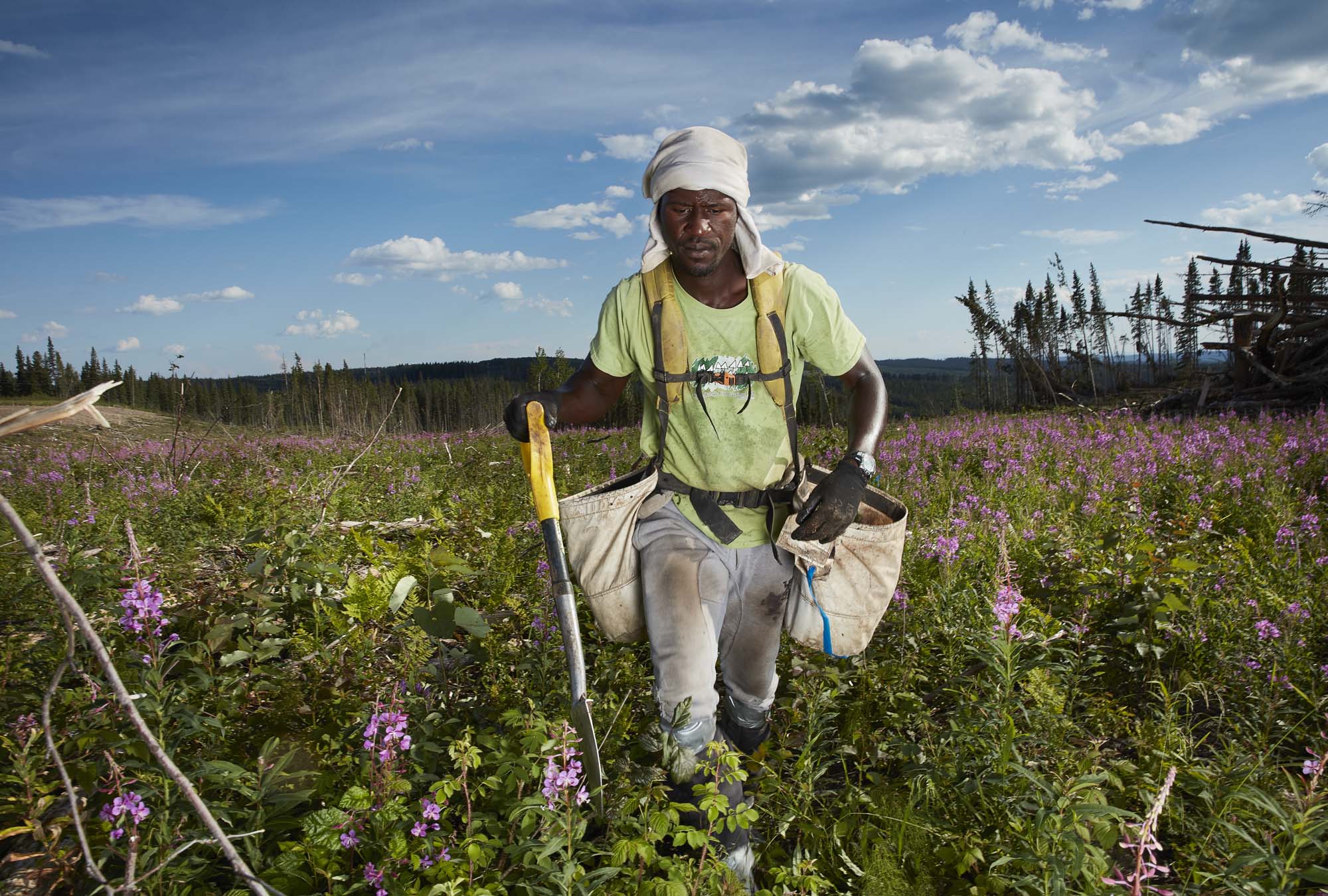 What we think of as modern Canadian tree planting is only in its third generation. I was at the tail end of the first generation (I planted more than 500,000 trees between 1984 and 1993). After tree planting, I became a photojournalist and spent a number of years both unembedded in war zones, and embedded with soldiers in Iraq and Afghanistan. When people asked me what had prepared me for that work, they were surprised to hear me say “tree planting in Canada,” because tree planting didn’t sound all that hard.

But the vast and varied terrain can be almost unimaginably rugged, overgrown, barely passable and steep. The swarms of punishing, biting insects are legendary. It is also seasonal work, which means it draws part-time labourers, including many university students, from the cities to the less populated forested regions of the north. This unusual urban migration has had an unexpected effect on Canada’s cultural and environmental mindset: The planters, changed by their experience, bring their new knowledge back to urban society. 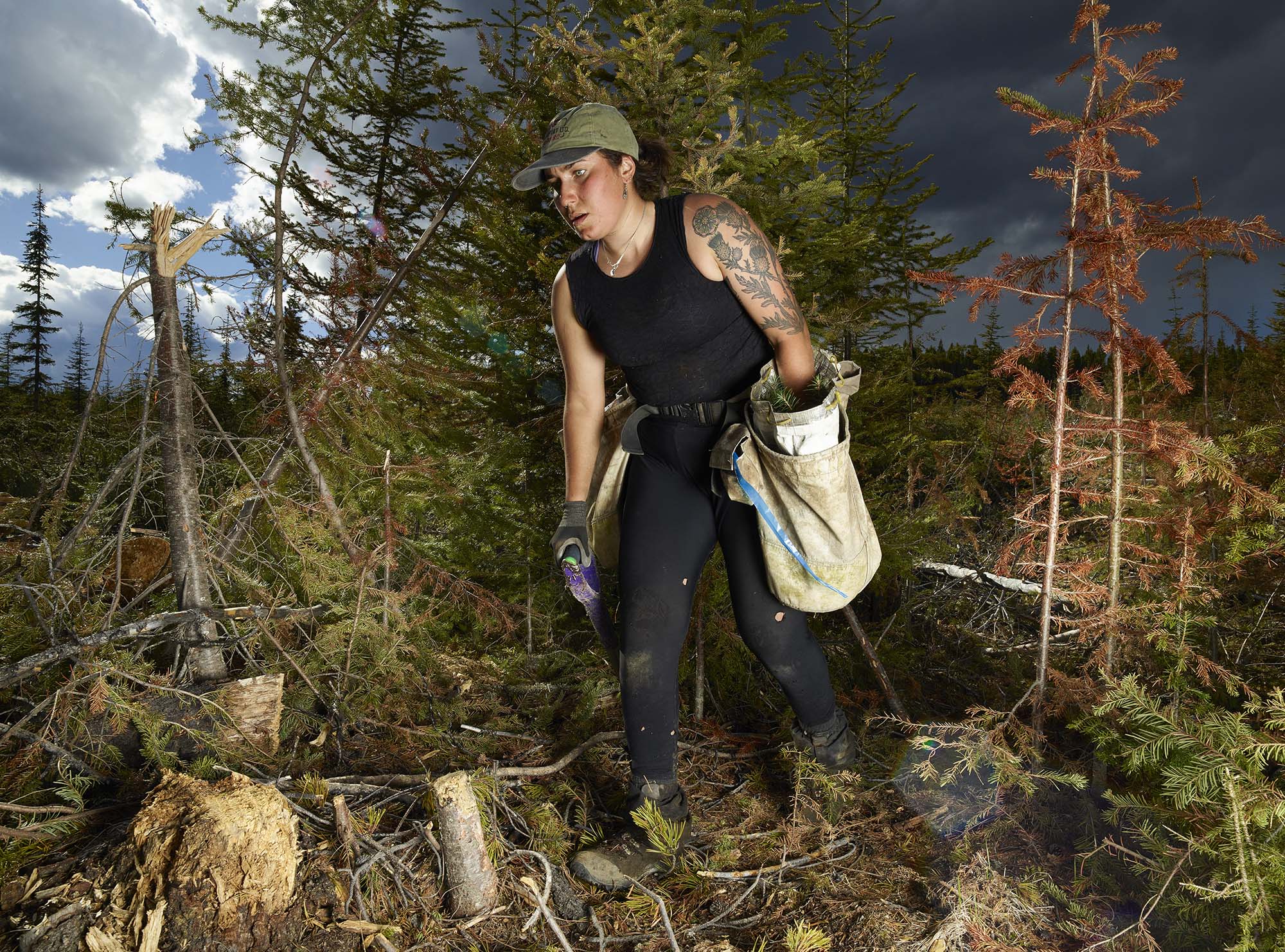 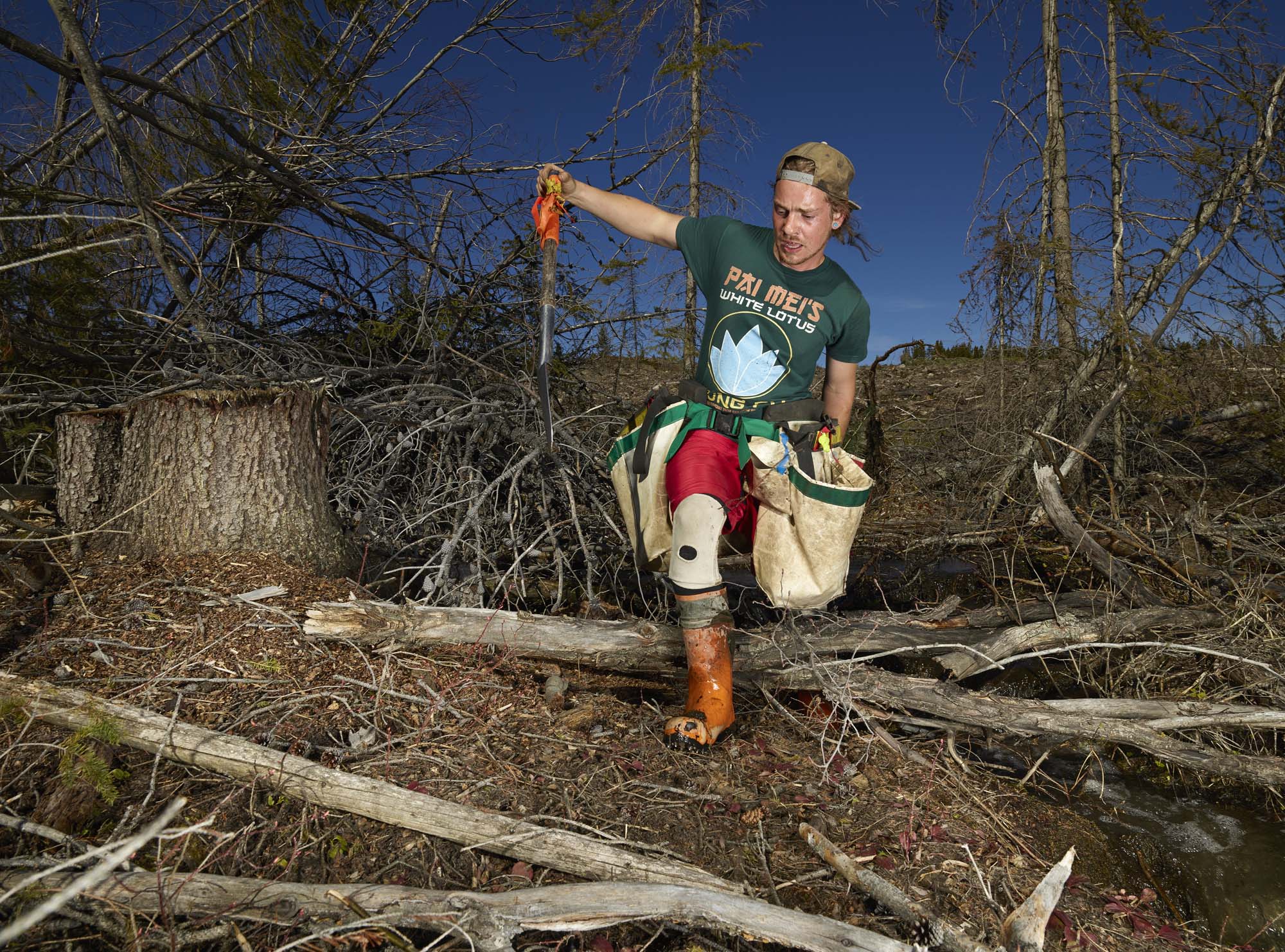 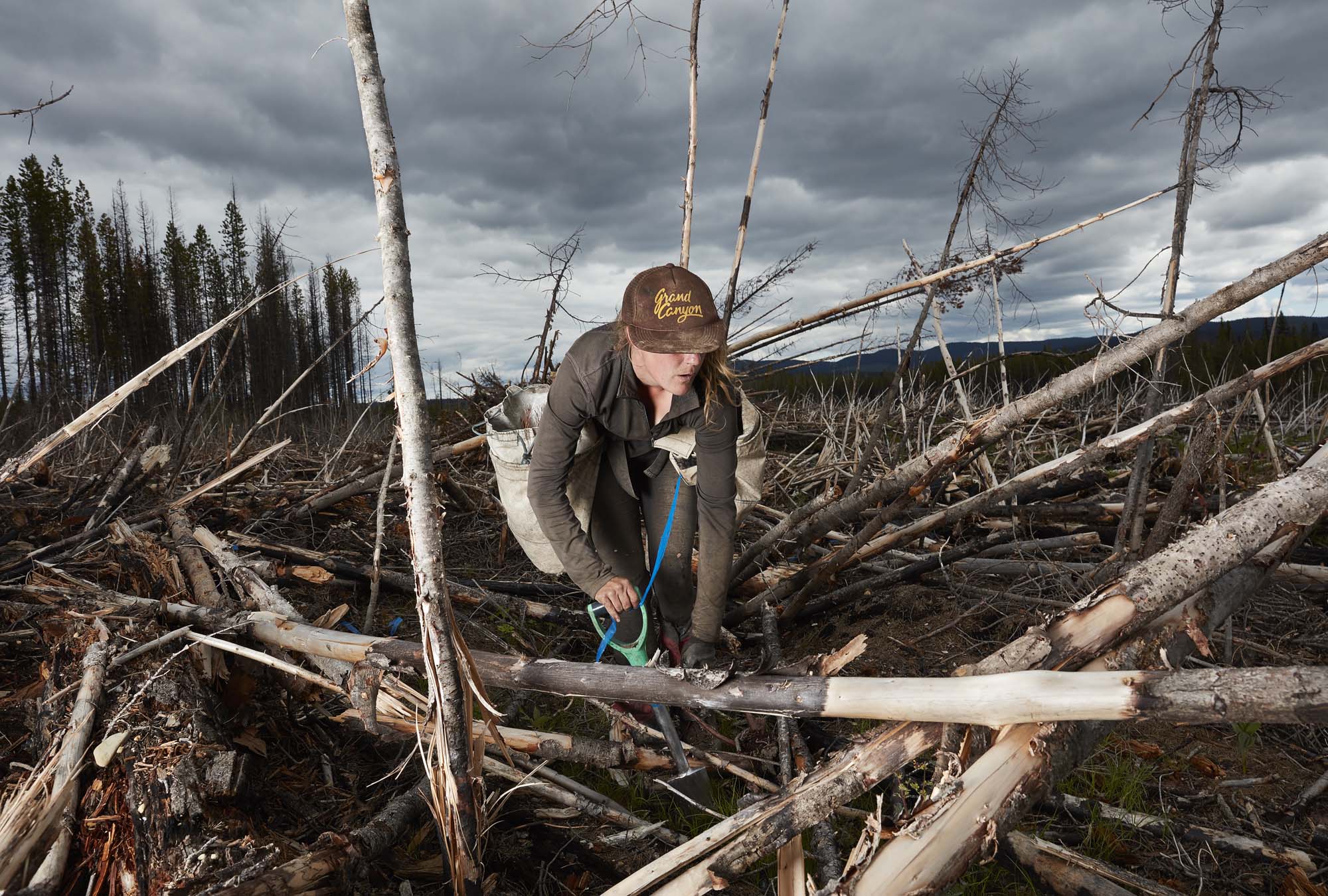 Canada counts former tree planters among its Members of Parliament and foreign ambassadors. This has influenced policy by increasing awareness of Canada’s forest industry as well as popular support for strict environmental laws and reforestation quotas – making Canada a world leader in forest management and forest sustainability. 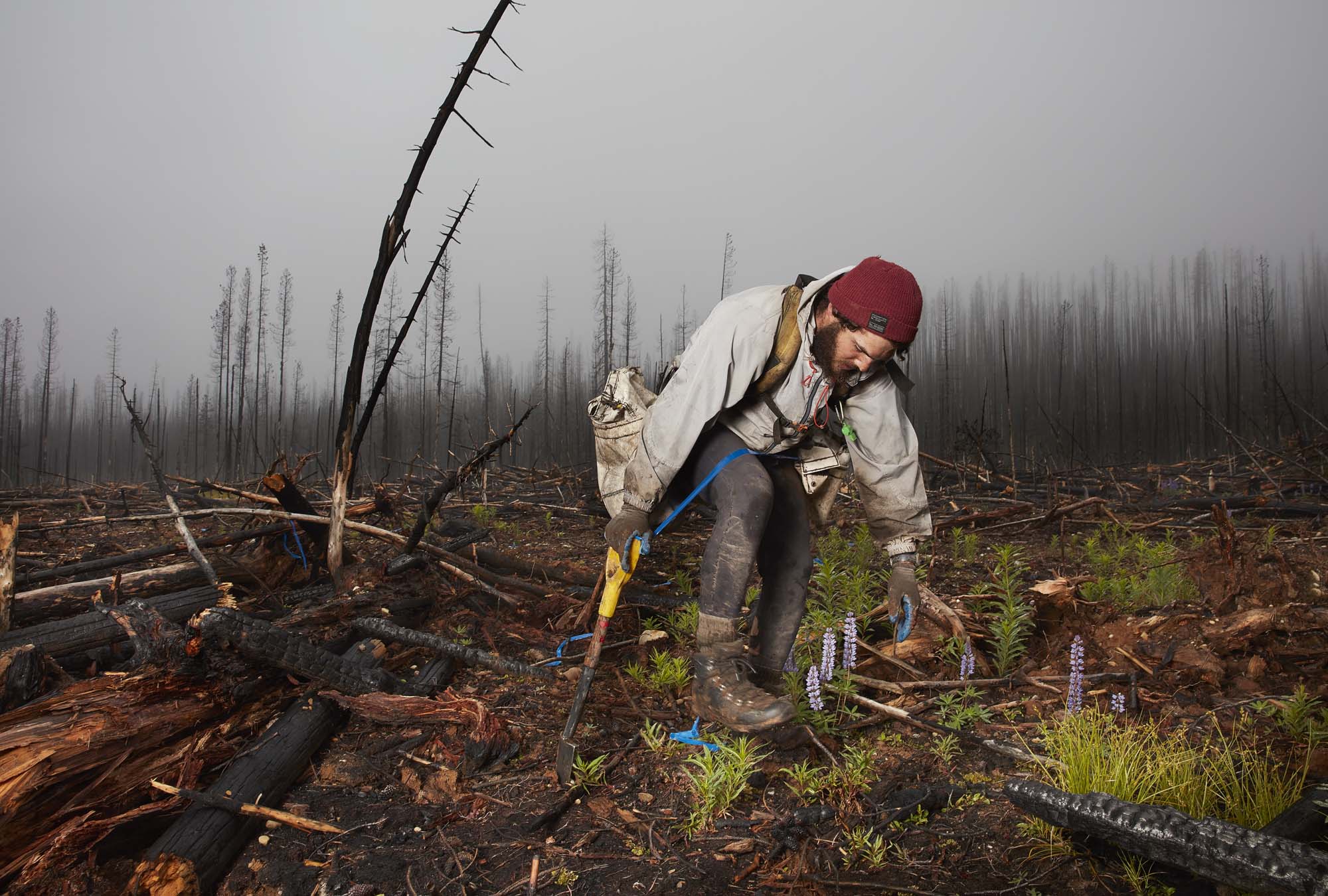 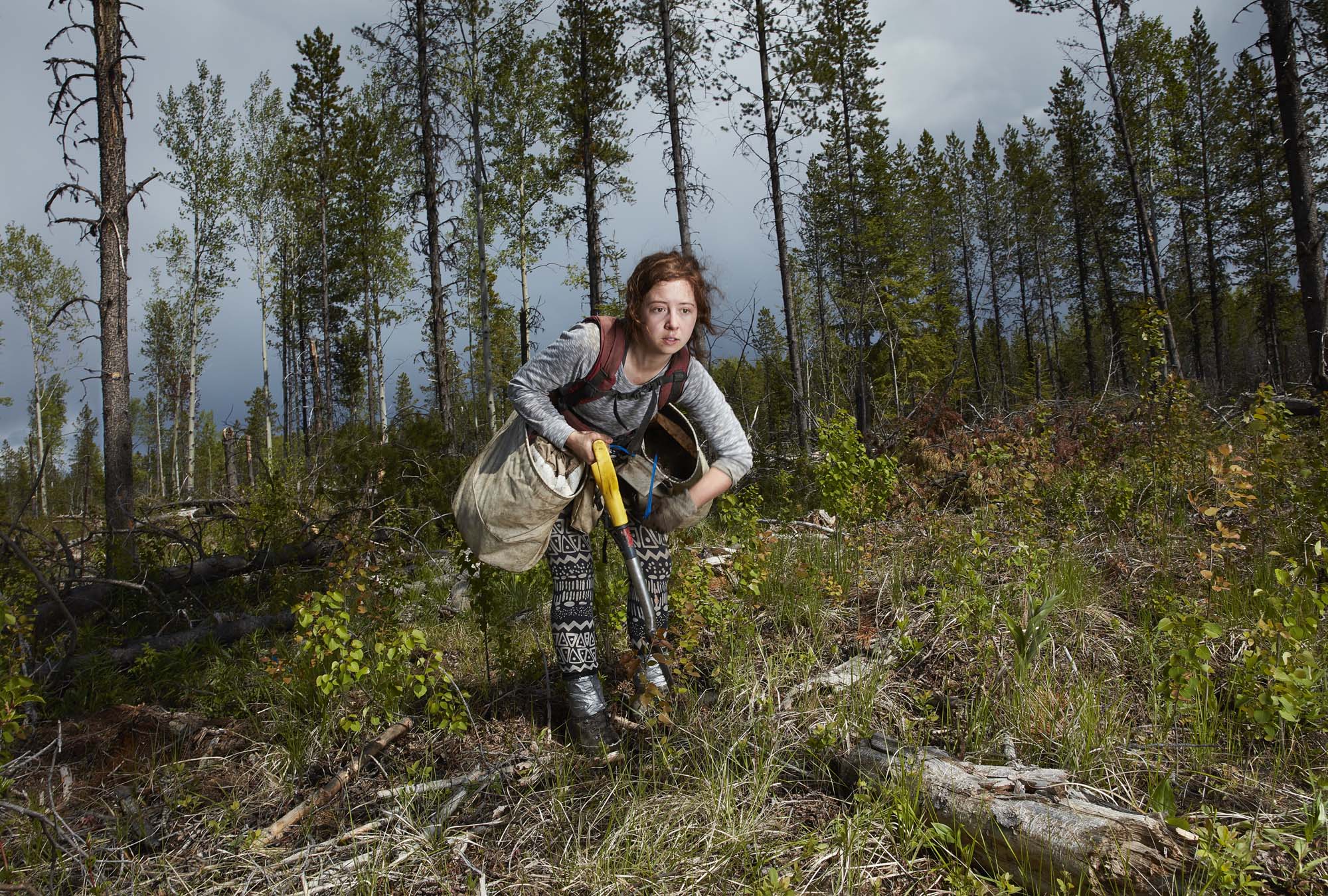 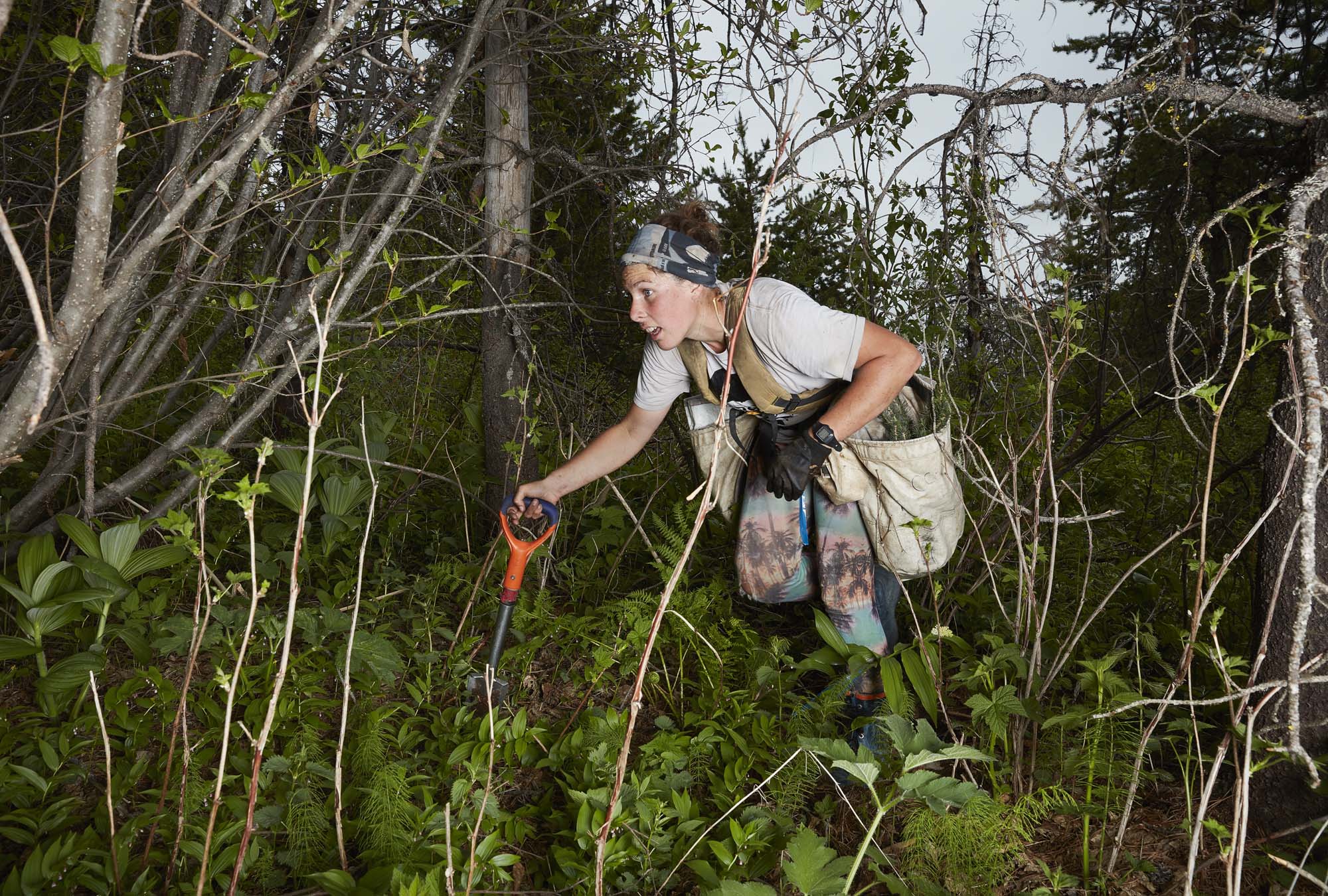 I had a very specific idea going in of what kind of photographs I wanted to make and why. The tree planters were warriors of the land, gods and goddesses of dirt, and I wanted to give them the same kind of respect and heroic treatment as has been given soldiers and loggers. I wanted to elevate tree planters in the historic, cultural and artistic tradition of Canada by creating photographs with a grandeur and aesthetic that would evoke classical painting. The depth of field and foreground detail give a feeling of dioramas in a natural history museum and accentuate the planters’ animal relation to the land. 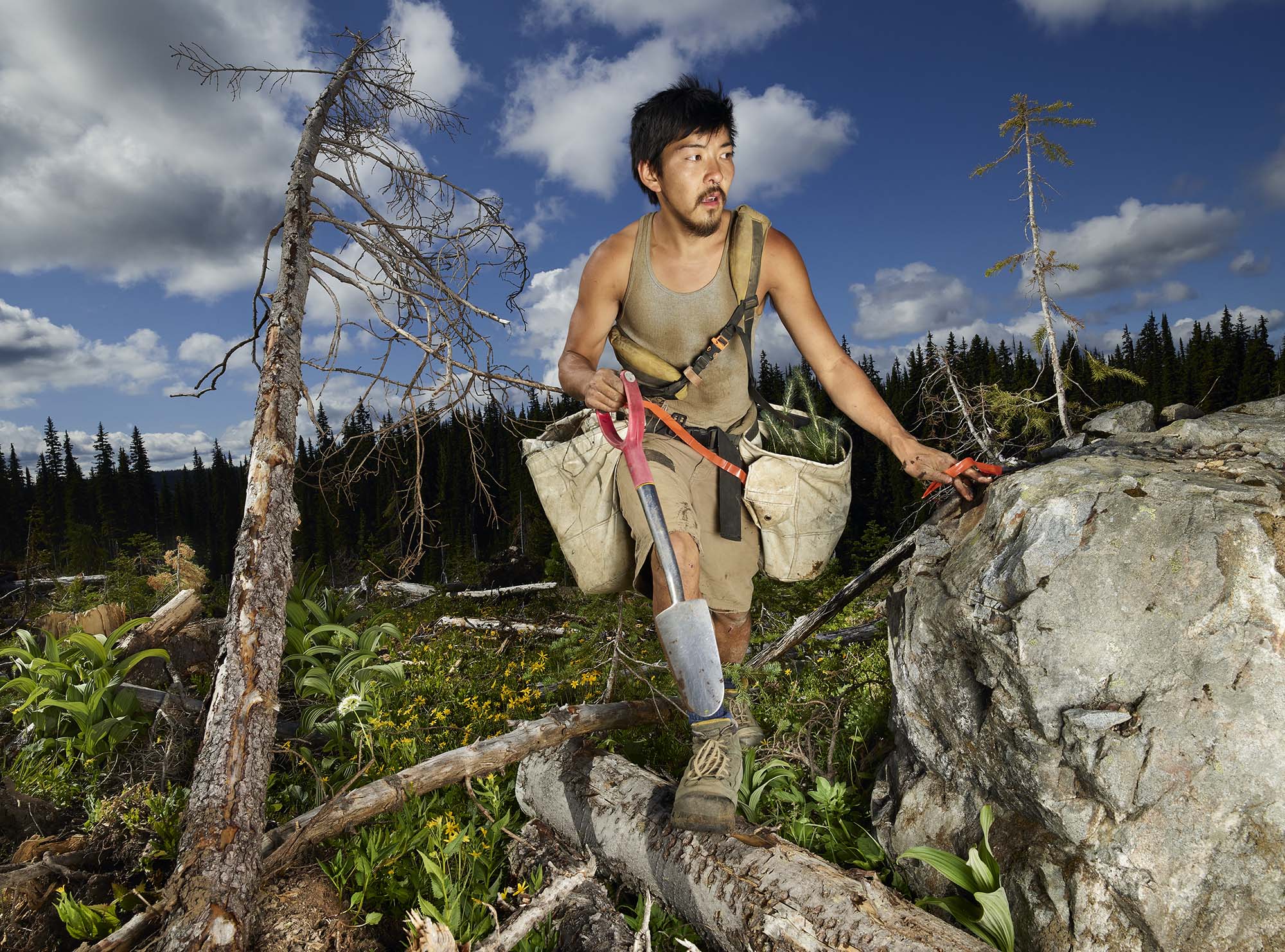 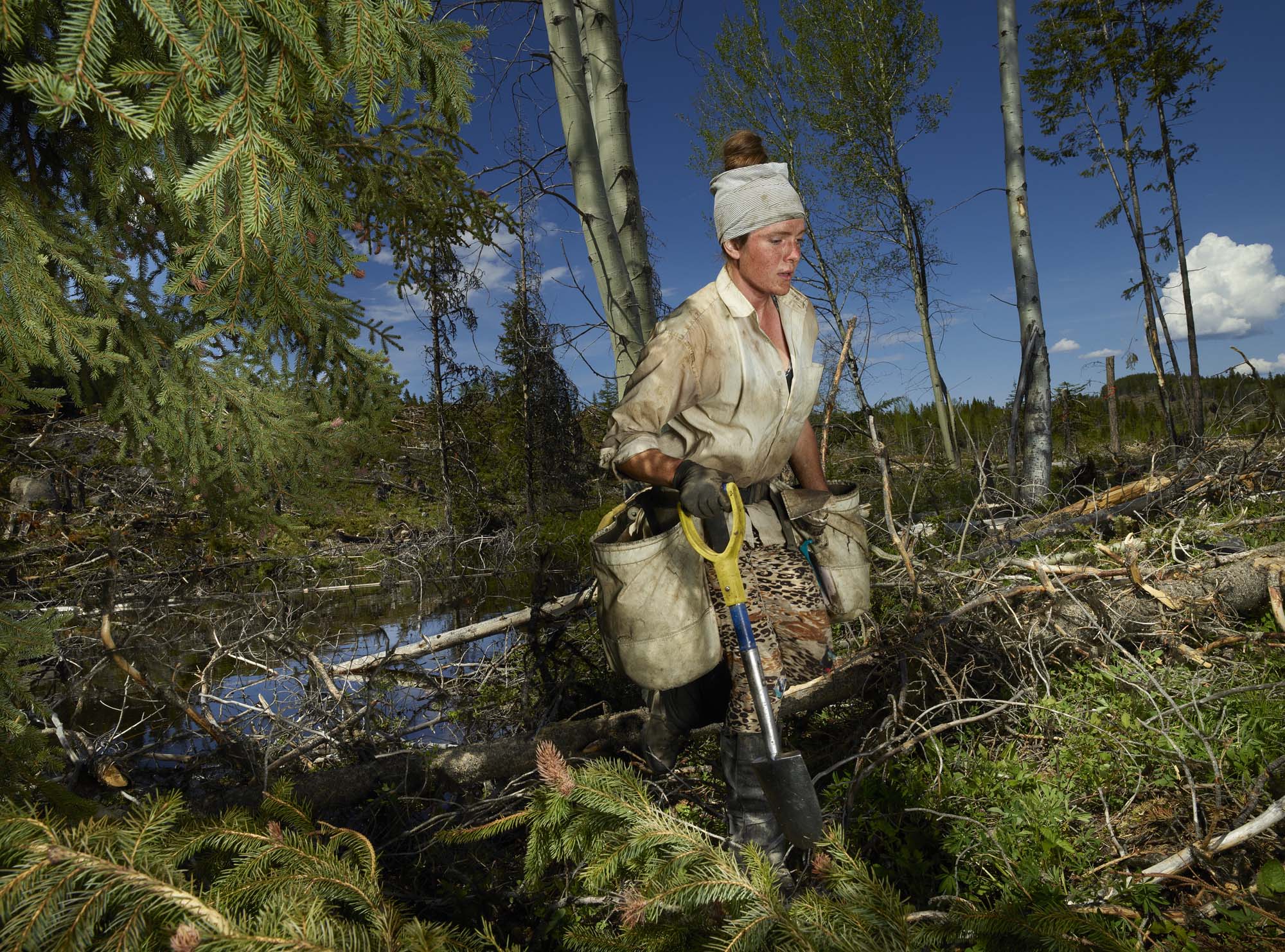 The technical and physical demands of making these portraits are off the scale. They were made with high-speed flash and a medium format leaf-shutter camera while my assistant and I ran backward through the bush to capture the planters in action.

I had a lot of fear about going back because of the physical and technical challenges I would face. What I hadn’t anticipated was that going back to the cutblock would have as profound an effect on me today as it had in my youth. It’s as if, in middle age, postwar zones, I have been given the gift of coming of age all over again. And the metaphor of sustainable life cycles and the forest has not been lost on me.

Photographs from The Tree Planters were exhibited (Fall, 2017) at the Stephen Bulger Gallery in Toronto and at Photo Doc Paris, (Spring, 2018) where Rita Leistner is the “Invitée d’honneur.” They are in private, corporate and public collections, including the Royal Ontario Museum and the TD Bank. Leistner is returning to the cut block in a few weeks with her cameras, her red jeep, her camper trailer Lucy, and a box of bug repellant.